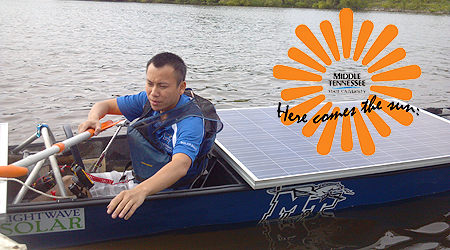 The captain of the MTSU solar boat team competing in the international Solar Splash competition is quite optimistic about the crew’s chances.

Brent Brubaker, leader of the 10-member team, expects MTSU to have its best finish ever by the competition’s end.

“We expect to do extremely well in the competition this year,” said Brubaker, a May MTSU graduate, “and not just in performance, but in design awards as well.”

Solar Splash is the world championship of intercollegiate solar/electric boating. The event’s website says Solar Splash is “a practical educational experience, which helps to develop teamwork and interdisciplinary skills.”

Solar Splash was “established to promote interest in science and technology, education and personal interactive skills,” giving students “an opportunity to apply theory to a practical project in a team environment.” Competing teams must follow highly defined rules and guidelines.

Junior Huy Brogdon brings the MTSU solar-boat entry back to the dock after a test run on George Wyth Lake June 14 at the international Solar Splash in Iowa. (photos submitted)

The 19th annual Solar Splash is being held on George Wyth Lake, located between Cedar Falls and Waterloo, Iowa, for the second straight year. After arriving June 12, the MTSU team registered its entry and was tied for seventh place in the June 13 technical report category.

The visual display, workmanship and qualifying were scheduled June 14. The Solar Slalom, Solar Endurance and Solar Splash events will be held June 15-17. Awards will be presented June 17.

Result updates can be found at www.solarsplash.com/results/event12.php. You also can watch a test demonstration of the MTSU solar boat above.

Brubaker and his mates have been working extremely hard to prepare a first-class boat. The group includes:

“It looks amazing,” Brubaker said of the MTSU entry, “and in the testing we’ve done during the previous weeks, it’s performed very, very well. We’re achieving speeds far faster than in previous seasons. And upon comparing them to the winning speeds and scores from last year’s competition, we expect to do extremely well in the competition this year.”

Brubaker and the team are particularly proud of the boat’s drive unit, which was designed and made by Cromwell in two weeks.

“The drive unit is 100 percent designed and constructed here on campus,” Brubaker said. “It’s of a caliber I can guarantee never has been seen at this competition before. It’s going to cause a lot of excitement, and we are almost guaranteed to win the Most Innovative Drivetrain Design award.”

Their optimism also includes “a pretty good shot at the outstanding hull design and workmanship awards,” he noted, adding that the team chose to build a completely new vessel with new electrical and mechanical systems.

Among numerous technical specifications, solar boats may not exceed six meters, or 19 feet, 8 inches, in length and 2.4 meters, or 7 feet, 10.5 inches, in width. The maximum allowable height above the waterline is 1.5 meters, or 4 feet, 11 inches.

Sunlight is the only power source that can be used for propulsion. Wind and human power are not allowed.

Each boat will have a skipper, who will be the sole occupant. Teams can only add or remove solar panels and batteries for different configurations.

MTSU’s previous best finish was eighth overall in 2010, a year when it also earned the Sportsmanship Award. MTSU has earned various team awards since it began competing in 2006.