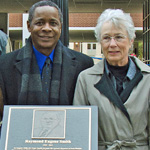 MTSU honored the late Dr. Eugene “Gene” Smith Oct. 27 with a plaque placed on university grounds in tribute to his role as interim president.

MTSU President Sidney A. McPhee and the family of the late Dr. Eugene âGeneâ Smith gather around a plaque unveiled Saturday, Oct. 27, in honor of Smithâs service as interim president of the university from 2000 to 2001. Smith, an alumnus of MTSU, served as a vice president at the University of Memphis for decades. (MTSU Photo by Andrew Nelson)

MTSU President Sidney A. McPhee unveiled the plaque during a special observance in Walnut Grove on the south side of Peck Hall attended by Smith’s family and university officials and supporters.

“I am proud to be here today, paying tribute to the life and accomplishments of the late Dr. Eugene Smith, who served the state of Tennessee, and this campus, with honor and distinction,” McPhee said.

Smith, who passed away in July at age 76, was named interim president of MTSU in 2000 and served until McPhee became president in August 2001.

“I deeply valued and appreciated his hard work and wise counsel in helping me assume my duties as president,” said McPhee, who also recalled fondly the days he worked with Smith in Memphis.

A 1957 graduate of MTSU, Smith became the second alumnus to serve as president of his alma mater. A native of the Walter Hill community in Rutherford County, he attended school in Lebanon, Tenn., and after graduation from college, he worked as a state auditor.

Smith received MTSU’s Distinguished Alumnus Award for Professional Achievement in 1997 and was the only Tennessean to ever be elected president of both the Southern and National Association of College and University Business Officers.