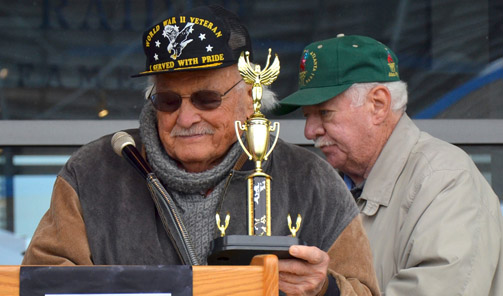 The 31st annual Salute to Armed Services/Veterans Day activities evoked a range of emotions from the late-morning Veterans Memorial Service to the halftime parade of veterans and active-duty military members walking across Horace Jones Field.

Em J. Ghianni, 90, of Nashville was one of the many honorees. He received the Joe Nunley Award, becoming the 23rd such recipient since 1990. Ghianni, a Buffalo, N.Y., native who relocated to Nashville in 1972 with a job change, was a World War II veteran.

“I am very honored by it,” Ghianni said of the award. “I had heard of the Nunley Award for many years. I attended last year when (state) Sen. Doug Henry was recognized. I got to know the true meaning of the award.

“When I heard he (Henry) nominated me — he has been a friend and an advocate of military matters — I was awed by the fact I was even being considered for the award. It’s historic and inspirational — one of the highlights of my being a part of the American Legion and Veterans of Foreign Wars.”

Joining Ghianni for the occasion were sons Tim and Eric and their wives, Suzanne and Ann, and grandchildren Maria, Ana, Emily and Joe Ghianni. Ana, a freshman, plays marimba in the MTSU Band of Blue.

Fayne Haynes, 90, owner of Haynes Flag and Flagpole Co. in Murfreesboro and the 2008 Nunley Award recipient, spoke during the memorial service.

“I was in World War II and had so many experiences,” Haynes said, adding that he served during D-Day and was injured in Battle of the Bulge, where he became a prisoner of war. “Like (former broadcaster) Tom Brokaw said, World War II produced the ‘Greatest Generation.’ We were considered a Christian nation. We were fighting against the whole world.”

Before the award presentation, veterans and their guests enjoyed a barbecue lunch from the MTSU Athletics Department in the Kennon Hall of Fame.

At halftime of the MTSU/North Texas Sun Belt Conference football game, veterans and active-duty personnel walked — or were pushed in their wheelchairs — across the field while the 460-member Band of Blue performed Army, Navy, Air Force, Marine Corps and Coast Guard marching songs.

In 1981, Nunley, a former professor turned alumni director, noted that a welcome-home celebration for Vietnam veterans drew 10,000 people to Centennial Park in Nashville. Nunley wanted to bring a similar event to MTSU, so he contacted alumnus John Furgess (’65), one of the Vietnam vets’ celebration organizers.

“In fall of ’82 at halftime of a football game, we had the first ‘Salute,’” said Furgess, a past VFW national commander in chief and American Legion post leader. “The next year, Gracie York, Sgt. Alvin York’s widow, walked across the field with six World War I veterans.”

“The students always have been behind it,” Furgess added. “The university presidents, through the years, have all been supportive. The university band and alumni office — all of it combined — make it a great tradition.”

With some reluctance, Nunley let Furgess talk him into using his name for the award, which was established in 1990. Nunley died in 1993; eleven recipients also have passed away. Joe Nunley Jr. represented the family during the Oct. 27 events.

The 2012 Salute to Armed Services events were the first for professor of military science Lt. Col. Joel Miller, who arrived in summer 2012 to lead MTSU’s ROTC cadets. The cadets also participated in the “Salute” events.

“It’s an event we look forward to every year and the next several years that I’m here at MTSU,” Miller said.

On display during the events were a Humvee, a Bradley Fighting Vehicle tank and a National Guard Indy Racing League car as well as the National Guard’s rock wall in the Walnut Grove tailgating area.

Marines collected items for their Toys for Tots program, and an inaugural silent auction raised funds for the Marines’ effort. Veterans also received assistance at the Healthcare and Benefits Fair outside Gate 3 at Floyd Stadium. The Veterans Affairs/Tennessee Valley Healthcare System presented the fair.

Main sponsors for the event included State Farm, Barrett Firearms, Bridgestone, USAA and the National Guard. You can watch a brief video from the day’s events below.