At the intersection of the counterculture and cultural history lies a small music club that has welcomed to its stage artists who have dared to be different since its opening in 1971.

Now MTSU’s Center for Historic Preservation seeks to enshrine Nashville’s legendary Exit/In on the National Register of Historic Places, the hall of fame for America’s most consequential locations. 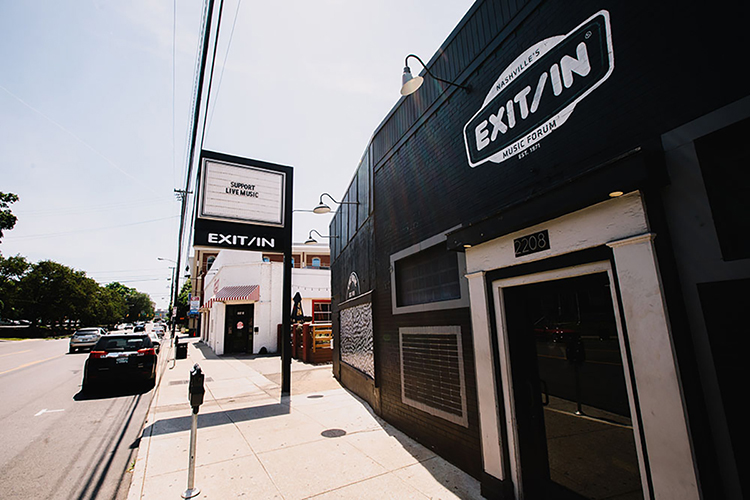 The Exit/In, a live music venue in Nashville since 1971, has welcomed acts ranging from Jimmy Buffett to The Ramones over the decades. It is located at 2208 Elliston Place. (Photo by Ryan Green from the Exit/In website)

With assistance from CHP Director Carroll Van West, who also is the Tennessee State Historian, doctoral candidate Jennifer Ruch is investigating the history of the Exit/In, located at 2208 Elliston Place.

Ruch says she does not lack for sources, which include local newspapers and journalists, Billboard Magazine and interviews artists have given over the years.

“We were actually positively overwhelmed with what existed out there just based on local journalism,” Ruch said.

The area around it, which has included bars, restaurants, record stores, tattoo parlors and clothing shops over the years, has come to be known as “The Rock Block.” Beverly Keel, dean of the College of Media and Entertainment, said she saw the Georgia Satellites play the Exit, as patrons have come to call it, on her 21st birthday. Keel calls it a “cultural institution not only in Nashville but nationally.”

“It has really evolved and remained relevant, which is very hard for a club to do,” Keel said.

Keel said everyone has a personal Exit/In story because a mix of socioeconomic groups from the suit-and-tie crowd to tie-dyed hippies has entered the unpretentious environment to be entertained.

While architectural significance might not be the Exit’s strongest selling point, Ruch remains optimistic that the National Register will appreciate what the Exit means both locally and to the country as a whole.

“There’s so much more to a music space that has to do with collective memory and experience and community significance,” Ruch said.

If Nashville newcomers need any reinforcement, all they need to do is look behind the bar at the wall of artists’ names who have played the club over the decades. It includes Harry Chapin, B.B. King, Tom Petty and the Heartbreakers, Billy Joel, Talking Heads, Dizzy Gillespie and comedians Billy Crystal and Steve Martin.

“It makes you jealous to see the names of shows that you missed,” Keel said. “Even superstars still play there.”

Ruch said the wall of names exemplifies an appreciation of musical culture apart from the traditional country music industry for which Nashville is well known.

“It’s a great reminder for those entering the space that it’s not just a live music venue,” Ruch said. “It’s far more than that. It really speaks to the ways that the underground existed in Nashville and the ways that we’re really pushing to identify and acknowledge that today.”

Ruch is an adjunct history professor at MTSU and a doctoral resident at CHP. She earned her bachelor’s and master’s degrees in history from Texas State University in San Marcos, Texas.

To learn more about the Center for Historic Preservation, go to www. https://www.mtsuhistpres.org/.

For more information on the National Register of Historic Places, go to www.nps.gov/subjects/nationalregister/index.htm.

To find out about the Exit/In, go to www.exitin.com. 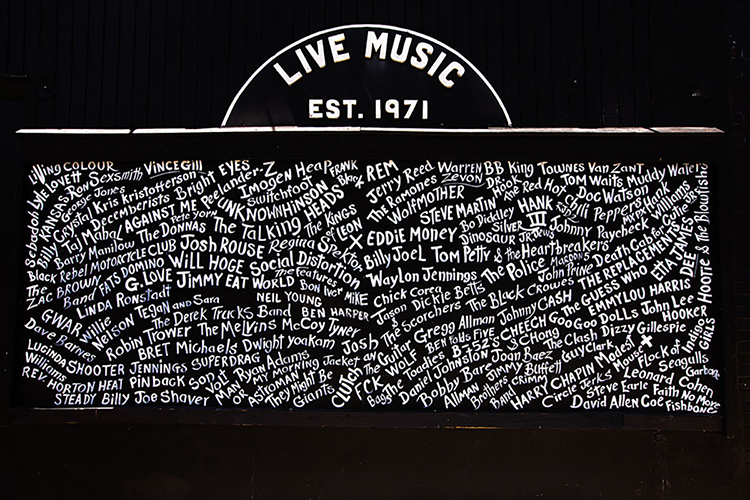 This mural, which is on the wall outside the Exit/In, lists the names of some of the famous acts that have played the venue on Elliston Place in Nashville. They represent a variety of genres, including rock, folk, country, and blues. (Photo by Ryan Green from Exit/In website)