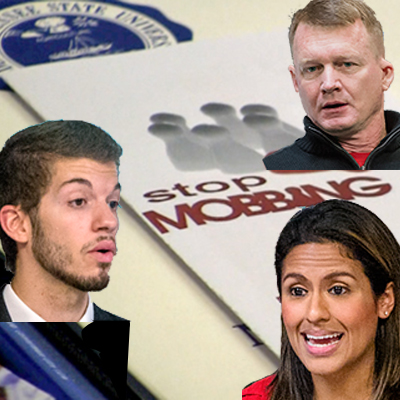 An impressive panel of area business professionals listened and watched intently as four student teams from professor Jackie Gilbert’s upper-level management course consolidated months of research and collaboration into 15-minute presentations inside a classroom at MTSU’s Business and Aerospace Building.

Dressed in business attire and fighting nerves throughout, the groups gave presentations surrounding the workplace bullying issues of stalking, emotional abuse, hazing and mobbing. Each four- to six-member team focused on a specific topic.

The goal of the semester-long experiential learning, or EXL, course was to give students hands-on project-building experience while promoting civility in the workplace, a topic close to Gilbert’s heart, teaching and research.

In recent years, she’s had her EXL classes address the issue of bullying through projects associated with Oakland High School in Rutherford County, Nissan North America’s headquarters in Franklin, Tennessee, and the MTSU campus.

“Bullying is a serious health concern, not just in schools, but also in the workplace,” said Gilbert. “This training is crucial to educate the next generation of leaders to the importance of this issue and how a culture of fear in which bullies rule can result in unethical practices and potentially in white-collar crime.”

For the latest class, Gilbert brought in 20-plus area business executives and HR professionals from companies and organizations such as Bridegstone Americas, UBS, General Mills and United Way, to name a few.

They volunteered their time to not only attend the evening presentations in mid-November, but they also attended a reception afterward where they networked with the students and offered feedback.

“One of the missions of EXL is community outreach,” Gilbert said, “so I wanted a project where students could both learn about a topic and serve the community by educating on that topic. … There isn’t a lot of education in this area (of workplace bullying), so I thought this would fill a need in the business community.”

Gilbert charged her student teams with developing professional presentations for the panel of experts that defined the team’s assigned incivility topic, explained the consequences to employees and an organization and outlined steps that should be taken to make sure such incivility isn’t allowed within an organization.

With a mixture of skits, humor, TV clips, brochures, testimonials, PowerPoint presentations and more, the teams showcased the professional skills developed the past few months that they ideally will carry beyond the MTSU campus to successful careers of their own.

“I think one thing we’ve learned, and I’m sure all the other groups did too, is working with groups … working with multiple people and multiple personalities,” Vernon said. “Something we struggled with was scheduling — six different people with six different schedules. … But we learned to work around it.”

Mills noted that just like in the real workforce, the project presented unexpected challenges that students had to address in order to complete the assignment.

“It showed us how to compensate when someone doesn’t show up,” Mills said. “You’ve got to step forward a little bit when someone else doesn’t.”

“You’re going to be asked to do things above and beyond because you’re a professional,” he told the students, “… not (in) some little defined box that you live in and that’s where you stay.”

Retired U.S. Army Col. Jeffery Bonner, an MTSU alumnus, shares advice with students during team presentations Nov. 12 inside the Business and Aerospace Building as part of Dr. Jackie Gilbert’s EXL Principles of Management class. Bonner was one of 20-plus area business leaders and HR professionals invited to the presentations.

Bonner attended the presentations with his wife and fellow military retiree, Darla, who participated in Team Schaeffer Analytics’ presentation by sharing a stalking experience she went through years ago. She agreed to do so at the request of the couple’s daughter, Forest, who was a student member of Team Gratify.

“I actually learned about some different aspects of behavior that maybe I had seen and didn’t know how to term,” she said. “This is a valuable experience for me as someone in business, as well as the students. I’d love to come back.

“I could tell that the students did their research. They were prepared, they cared about their topic, and I’m impressed with Dr. Gilbert reaching out to the community to say, ‘Come see what we’re doing with future leaders.’”

Gilbert randomly selected team members, who then had to assign roles of leader, speaker, researcher and PowerPoint master. The groups held meetings throughout the semester, after hours and on weekends, in preparation for their presentations — just like in the real world.

MTSU business students created this brochure about the issue of “mobbing” in the workplace that was passed out during student-team presentations Nov. 12 inside the Business and Aerospace Building as part of Dr. Jackie Gilbert’s EXL Principles of Management class. (MTSU photo)

“In companies, you’re often assigned to a team where you don’t have a choice in the matter,” she said. “They had to navigate these team dynamics and work out conflicts and gel as a team over the course of several months. … I think they did whatever they needed to do to get where they needed to go. I’m very proud of them.”

Gilbert has taken her passion for civility beyond the classroom: She was part of a group of advocates who helped shape the Healthy Workplace Act, which was signed into law in June 2014 by Gov. Bill Haslam.

The legislation grants legal protection to those government agencies that adopt a model policy to combat abusive behavior in the workplace or craft comparable guidelines of their own.

Citing the book “Moral Courage in Organizations: Doing the Right Thing at Work,” Gilbert notes the author’s position that “an organization culture of genuine respect and empowerment would enhance employee satisfaction. This would boost productivity, reduce turnover, and ultimately yield more profit.”

She also notes that in 2013, the Society for Human Resource Management suggested that companies adopt an “anti-bullying policy,” while a 2014 Zogby survey found that “72 percent of the adult American public is familiar with workplace bullying,” with 27 percent having suffered abusive conduct at the hands of their employers.

On Feb. 27, 2016, Gilbert will be giving a two-hour civility seminar as part of the Jones College Executive Education Program. Registration is open at http://mtsu.edu/business/civilityseminar.php.

The course is part of the Jones College M.S. in Management Program, but can also be audited and taken for non-credit while having access to all of the resources and class discussion.

MTSU students Forest Bonner, left, and Jessica Dickens, center, discuss the issue of emotional abuse in the workplace during student-team presentations Nov. 12 inside the Business and Aerospace Building as part of Dr. Jackie Gilbert’s EXL Principles of Management class.