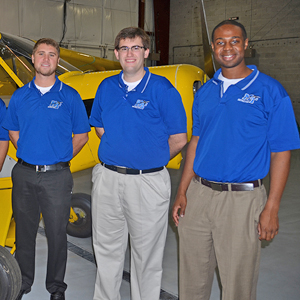 An agreement between the MTSU aerospace department and College Park, Ga.-based ExpressJet recently paid dividends when six university flight instructors were hired after all completed the same-day interview process.

“For all six to get hired is a real testimony to how hard they worked and how much time they put into their efforts with their students,” said Paul Mosey, MTSU’s chief flight instructor at the Flight Operations Center at Murfreesboro Airport. He said it marked the first time ExpressJet ventured to a university for a mass interview.

“All of us are very near to our flight hours to move on to the airlines,” Waite said. “ExpressJet has chosen MTSU as one of their programs to source pilots. … As MTSU graduates, they know that we deliver professional pilots who are prepared and ready to move on and go into the airlines.”

Mosey said all six came through the nationally known aerospace program, and earned their private instrument, commercial, multiengine, certified flight instructor and other certifications along the way.

“Students can start the hiring process well before they graduate so they are essentially hired ahead of time as long as they pass the early interview process,” Mosey said.

“I’m very proud of them and proud of our program,” Mosey said. “It shows how well-prepared MTSU aerospace and pro pilots are for the workforce. … I wish them the best of luck.”

“We’re looking forward to more people getting hired by ExpressJet and other airlines,” Mosey added.

Aerospace is part of the College of Basic and Applied Sciences. To learn more, go to http://mtsu.edu/aerospace/.