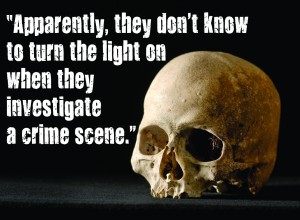 The beam of a flashlight plays across a warehouse floor, finally coming to rest on a body, awkwardly twisted.  The investigator squats down, sweeps his light, then a gloved finger over the singed fibers where a bullet left the body.  “Dead before he hit the ground,” he says.

“Ever notice they don’t do that in the dark?” asks Dr. Hugh Berryman. “Apparently, they don’t know how to turn the lights on when they investigate a crime scene.”

Having investigated plenty of crime scenes during the past 30 years or so, Berryman gets a kick out of dramatic representations of what he does for a living, though he says he almost never watches them.  That’s a bold statement, given that you can’t pass a television nowadays without running across a police procedural.  In the 1970s, Americans loved Quincy, staring Jack Klugman as crusading medical examiner, but the nation really caught forensics fever in 2000, with the premiere of CSI (now ubiquitous through spinoffs, copycats, and the combination of syndication and hundreds of cable channels).

To their credit, most crime shows do seek input from forensic experts.  (Years ago, Berryman was asked to be a consultant for bothCSI:Miami and the crime drama Crossing Jordan.  “When CSI called, I said, ‘You know, I never watch your show.’ They never called me back.”)

Internationally renowned forensic anthropologist Dr. Kathy Reichs, who visited MTSU last April as part of Berryman’s Legends in Forensic Science series, is uniquely positioned in both the real and fictitious worlds of forensic science.  Her series of novels about forensic anthropologist Temperance Brennan inspired the hit TV series Bones, which Reichs produces.  While there’s sound science behind her show, she says, some parts of a forensic scientist’s job simply don’t lend themselves to dramatization -like the prolonged tedium of reconstructing a shattered skull fragment by fragment.

The wild popularity of crime shows hasn’t changed forensics, Reichs says, but it has changed popular perception of the field, with mixed results.

“People have a better idea of what we do,” she says.  “I don’t think anyone had heard of forensic anthropology 15 years ago.  And I think they have an unrealistic expectation of what science can do, but it’s good that the public has a better understanding of what a powerful tool it can be.”

That’s a point driven home regularly in the news, as cutting-edge DNA analysis, taught at MTSU as part of its new forensic science major, is now helping exonerate prisoners who have spent decades behind bars -sometimes on death row- for crimes they did not commit. MTSU