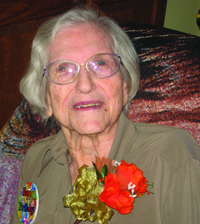 As September 2011 approaches, the MTSU family is increasingly turning its sights toward the University’s Centennial celebration.  Virgina Fielder Hobbs (’37) has already turned that corner.  The pioneering graduate celebrated her 100th birthday in November 2010.  A public school teacher, Ms. Hobbs was appointed supervisor of music for Davidson County Schools (later Metro Nashville Schools) in 1950.  As such, the woman known as “Tootsie” in her hometown of Waynesboro, impacted literally thousands of middle Tennessee elementary school children whom she taught to sing, play the flute, or simply to enjoy music.  At the time of her retirement in 1975 -following 44 years in education- Tootsie was a member of the State Board of Education.

Among Tootsie’s visitors on her 100th birthday was her niece, Dr. Virginia “Jenny” Dodge Fielder, a charter member of MTSU’s College of Mass Communication Board of Visitors and former vice president for research for Knight-Ridder Inc.  In 1998, Dr. Fielder established the Fielder Family Endowed Scholarship at MTSU.

According to Dr. Fielder, her aunt Tootsie has been a remarkable story from the beginning.  Her family is said to have put Tootsie, born prematurely and weighing only 2 1/2 pounds, in a buggy warmed with hot bricks and placed her under the flue in their house to keep her warm.  “It is amazing she lived,” Dr. Fielder says.  “It’s been an amazing life!”