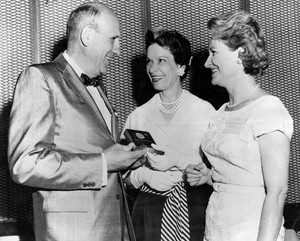 In 1960, while teaching at East  High School in Nashville, Nell F. Pinkerton (’34), was named Seventeen magazine’s national home economic teacher of the year.  The graduate of what was then Middle Tennessee State Teachers College later became director of home economics for the entire Metro School System, responsible for curriculum, budgets, and home economics teachers district-wide.  She passed away on Nov. 17, 2010, at the age of 97.

Pinkerton also co-authored the Nashville Cookbook for the Nashville Area Home Economics Association.  A fundraising effort that compiled the best family and Nashville historical recipes that local home economics teachers could muster, the book included written profiles and original charcoal drawings of many of the most historic homes in the Nashville area, including the Hermitage, Cheekwood, and Rattle and Snap.  A wildly popular book, the Nashville Cookbook was eventually purchased by Southern Living magazine and commanded many additional printings.

Pinkerton, whose husband, James, also attended MTSU and served for many years as operations manager at Nashville Electric Service, is survived by her son, Jim Pinkerton, city manager for the City of Kingston in east Tennessee.