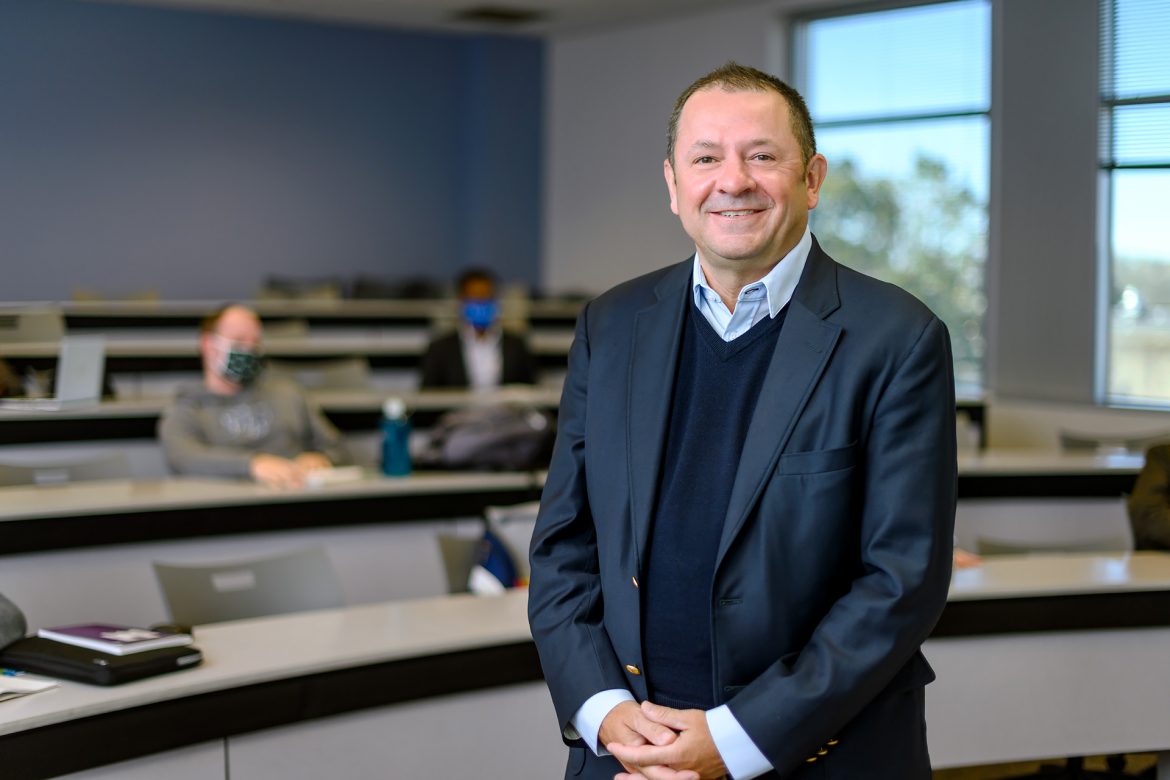 Like many other instructors, MTSU economics professor Stuart Fowler has needed to think creatively during the COVID-19 pandemic about how to keep students engaged in a mostly virtual environment that at times can feel disconnected.

Thankfully for him, the pandemic opened an unexpected opportunity over the summer that led to a rewarding, though accelerated, class experience for the fall — Middle Tennessee State University competed in the National College Fed Challenge for the first time.

Sponsored by the Federal Reserve, the Fed Challenge is a team competition for undergraduate students that requires college scholars to analyze the ebbs and flows of the nation’s economy and formulate a monetary policy that would eventually be scrutinized by financial gurus from the Fed.

“We learn a lot of theory in our economics classes, and it was very rewarding to get to see them apply it, and have to use the theory and try to explain it to someone,” said Fowler, a 20-year veteran of the university. “You realize, ‘Yeah, they could do it,’ and they realize that they can do it, too.” 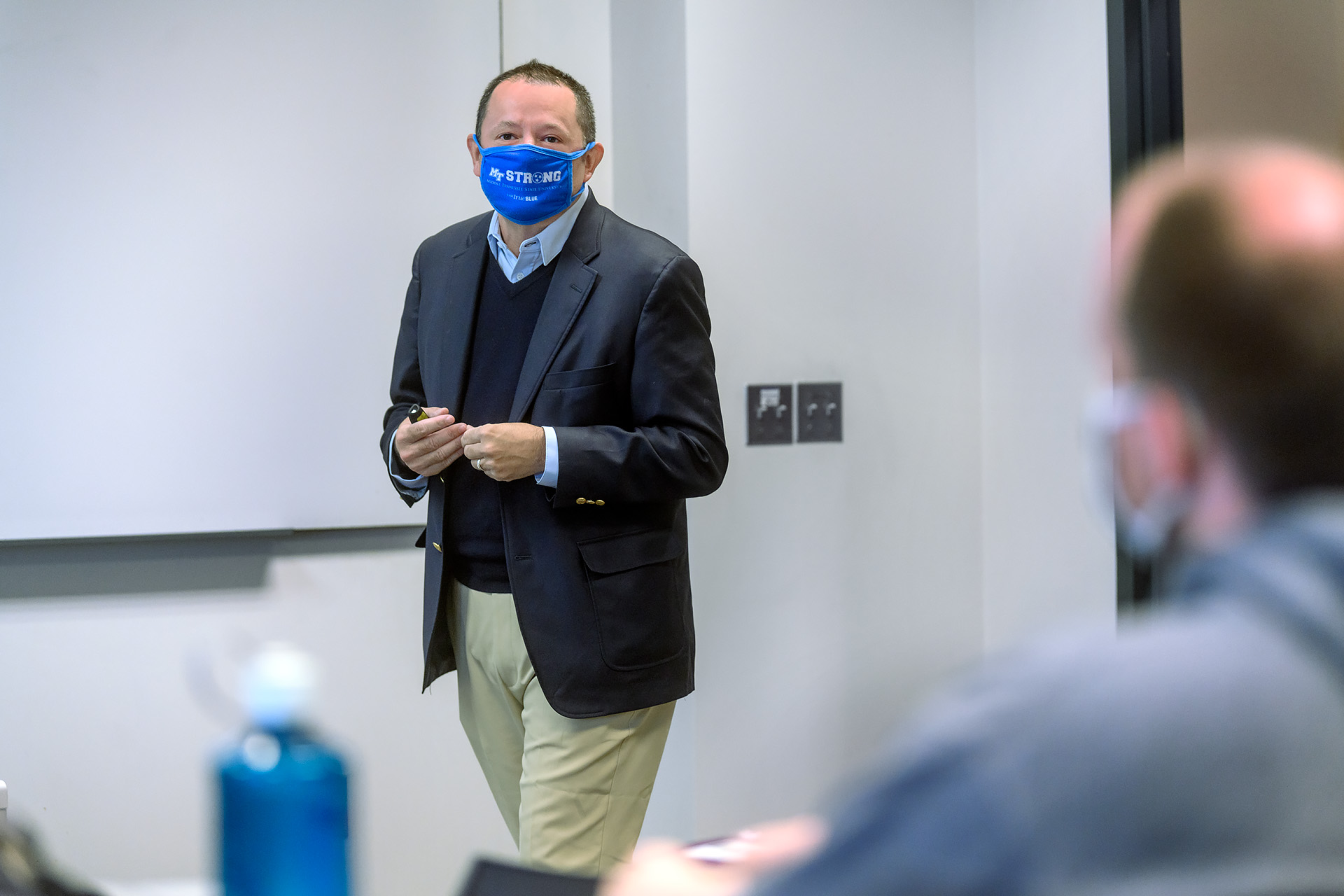 Faculty profile for Stuart Fowler, Economics & Finance in the Jones College of Business in his BAS classroom. (Photo: J. Intintoli)

The university wasn’t informed until July that it could field a team for the 2020 contest, meaning somewhat of a scramble to not only identify Jones College of Business students who didn’t already have their fall class schedules locked in, but to also find top scholars capable of representing the institution on a national stage.

Fowler said he was fortunate to have taught a really strong class of students in the spring and had maintained contact with them over the summer through digital social platforms such as LinkedIn as everyone continued adjusting to the everchanging COVID-19 environment.

Fowler then partnered with fellow professor Anne Anderson, Weatherford Chair of Finance, to finalize selections and co-teach a Finance Competition and Challenge class for fall to shepherd the six-member team through research assignments, Zoom meetings and only two days of in-person interaction due to COVID.

And rather than having a traditional class schedule stretched across 14 weeks, Fowler said he and Anderson decided to take advantage of the university’s option to hold an accelerated class of seven weeks, with the end of the compressed course coinciding with the team’s deadline to submit a video presentation to the Fed as part of the competition.

“We primarily picked students from our economics classes that we really felt would benefit from an opportunity like the Fed Challenge,” Fowler said. “And the accelerated option was perfect for a class like this. It worked out really well.” 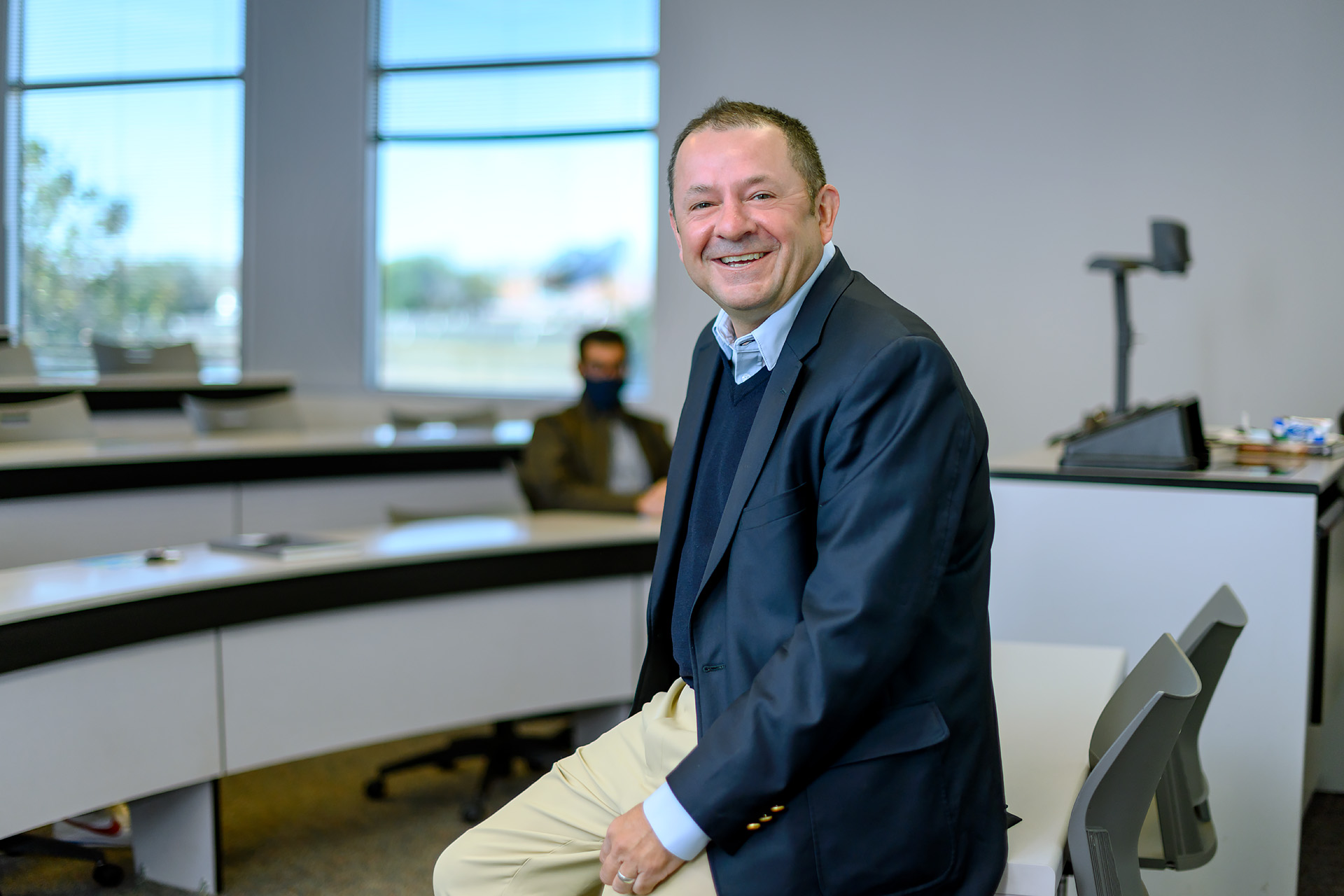 Faculty profile for Stuart Fowler, Economics & Finance in the Jones College of Business in his BAS classroom. (Photo: J. Intintoli)

Normally, Fed Challenge teams would make in-person presentations at sites throughout the country, but COVID canceled such events. Moving the competition to a virtual format allowed schools outside the normal participating Fed Challenge districts, like MTSU, to compete in a newly created “at-large” region.

Each student had a specific area of responsibility in developing the policy recommendation, from labor and unemployment to fiscal policy to COVID-19 impacts. The broad nature of Fed policy required independent and collaborative research by students, leading to a real-world, team-oriented experience they will likely encounter professionally beyond graduation.

“All of them were willing and eager to take on their role as well as allow the other teammates to succeed in their role,” Fowler said. “That’s where they really began to gel as a team.”

That team dynamic also applied to him and Anderson. “For me, we don’t get a lot of team activities as professors,” he said.

Using a football analogy, Fowler likened himself and Anderson to co-head coaches who also assumed individual roles as coordinators, providing students with a playbook to complete their project and guiding them throughout the semester as they marched toward their goal.

Another advantage of the virtual environment was that it allowed Fowler and Anderson to bring in guest speakers, including a top research economist from the Atlanta Federal Reserve and another economics professor who had two decades of experience at the Fed. Both shared their wealth of financial experiences with students.

“The guest speakers absolutely loved it, and so did the students,” Fowler said. “In fact, many of our ideas for the video presentation came from the conversations we had with those guest speakers. … It worked out wonderfully.”

Using a multicamera setup, the team filmed a scripted 15-minute video presentation — “Monetary Policy Amidst Uncertainly and Inequality during the COVID-19 Pandemic” — a few weeks ago with the help of staff from the university’s Audio Visual Services in the Center for Educational Media inside a Business and Aerospace Building classroom.

With roughly 70 teams across the nation competing, many from institutions with previous Fed Challenge experience, needless to say the competition was stiff. And while the MTSU team ultimately didn’t make the group of finalists, Fowler said the video presentation alone offered “a great learning opportunity” for students and he plans to review presentations from the winning teams to glean ideas for future competition classes.

“They had to be effective communicators, all of them. That camera was on them and they couldn’t hide behind the mask,” he said. “And they worked very hard. … Pretty much every tool that they’ve developed during college, they had to use in some way.”