“I knew that once they (McEntire’s team) saw the Tennessee Miller Coliseum that they would fall in love with it, and that it would be their choice,” said Beverly Keel, dean of the university’s College of Media and Entertainment.

“I am so super appreciative of the university allowing us to be here,” said the video’s producer, MTSU alumna Christen Pinkston. “They’ve been so accommodating, and it’s been really nice to see students and people excited about a video and an opportunity.

Shooting the video at her alma mater was “really a full circle moment,” she added.

How it came together

The video is set after the rodeo ends. Pinkston searched online for rodeo arenas in the area, and when she came across Miller Coliseum off West Thompson Lane in north Murfreesboro, she realized “it’s part of MTSU…. It was really cool to come to that realization.” 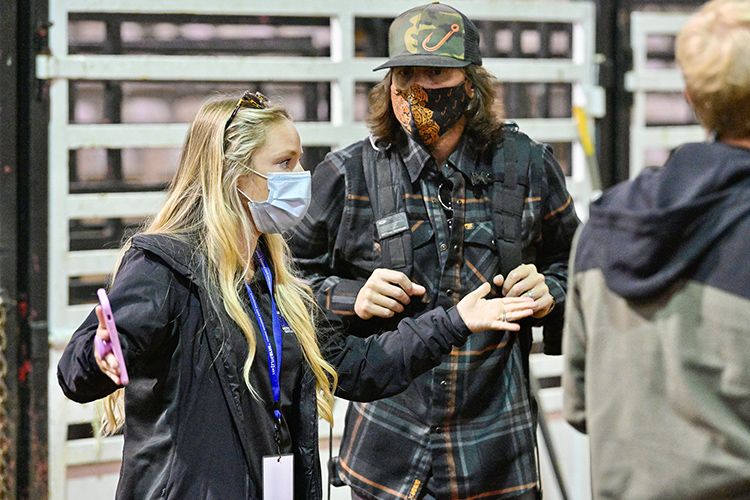 Shane Tarleton, senior vice president of artist development at Warner Music Group, then reached out to MTSU’s Keel on Sept. 10 about the project.

“Within 30 minutes,” said Keel, “I was able to tell Shane we could make it happen. It emphasizes the teamwork and collaboration of MTSU.”

Within minutes, multiple campus teams came together right away to help make it a reality, including Division of Marketing and Communications, the Media and Entertainment and Liberal Arts colleges, Production Services and the staff that manages the coliseum, which is about six miles away from the main campus.

Including students came up in conversation “right away,” Keel said. “That’s our main goal always.” 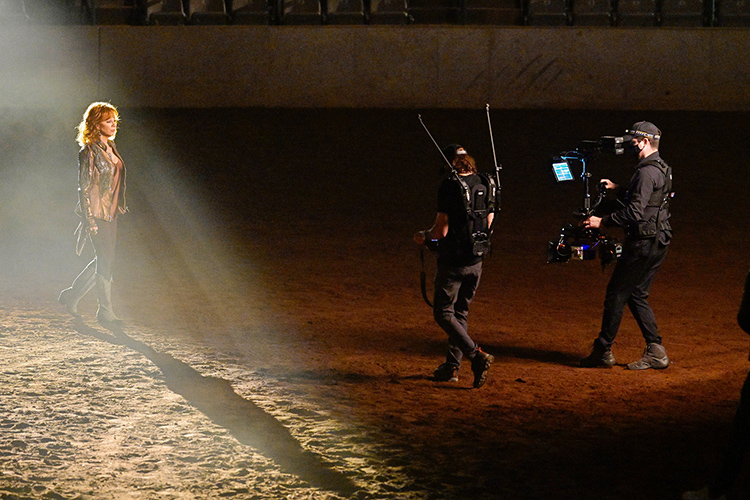 Recently graduated Jones College of Business alumnus Kobe Hermann, an MTSU marketing assistant, served as the Oct. 1 shoot’s field producer, hiring the student crew and coordinating MTSU’s support. He said students weren’t informed about the identity of the musical artists until they arrived on set — and all involved had to keep the production under wraps until the video’s release in December.

In line with the university’s COVID-19 precautions, a production team worker checked everyone’s temperature upon arrival and fitted those who were cleared with a green wristband. Everybody wore a mask, when not on camera, and socially distanced.

“Our students were involved in almost every aspect of this production, taking the stuff they’re learning in the classroom and applying it to a big name like Reba McEntire,” Hermann said.

Added Pinkston, “It’s great for students to get an experience like this. It’s (also) great for production to have these locations and have these students who are willing to help and hungry to learn.” 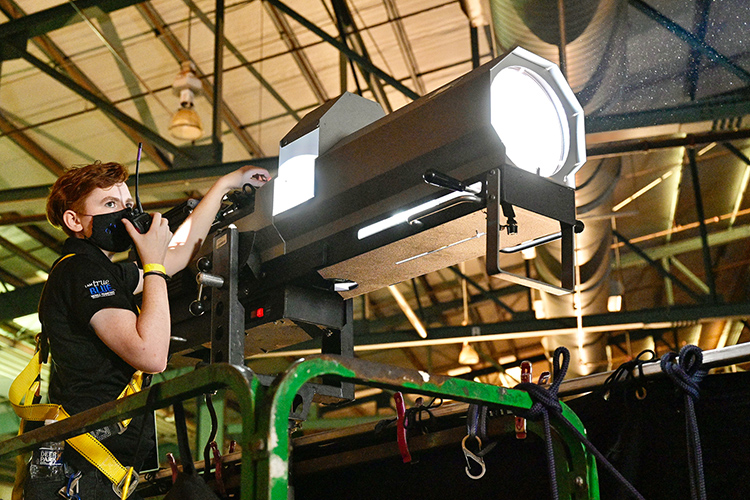 Erin Featherston, a senior student worker pursuing her degree in theatre, worked on lighting for the shoot. She was most excited about “getting back out there … and getting that real hands-on experience.”

“This is something that looks great on a resume,” said Jo Litzenberger, a senior student worker studying video and film production. As a production assistant on set, he added that the work exposed him to professional camera gear and equipment, and that it was good to observe professionals in their element.

“Videos are very hard work,” said Keel. “They’ll (students) see that… You work 12 hours to get a three-minute video.” 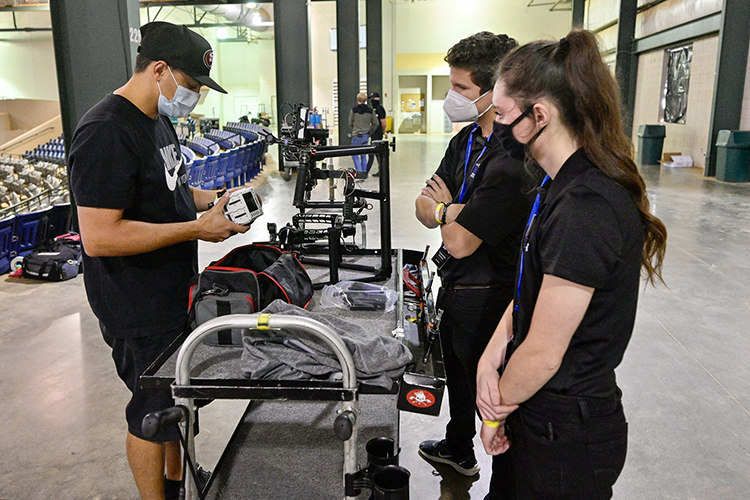 The video’s concept required turning the horse science coliseum into a dream-like setting. Students hung black paper over all of the space’s windows, cloaking the venue in darkness. At the song’s climax, McEntire and Johnson, followed by camera crews, strode toward the center of the coliseum’s dirt floor, each illuminated by spotlights. The singers, illuminated a soft haze in the air created by fog machines, belted out the lyrics.

Student workers, in black shirts emblazoned with the MTSU logo, hustled around, manipulating spots, running cameras and dealing with sound — but they weren’t the only True Blue representatives on set.

Nic Dugger, the technical producer of TNDV Television Inc. and an MTSU alumnus, ran a livestream interview of McEntire and Johnson from the coliseum floor. “We have 52 employees now,” Dugger said of his company, “and the reason so many of those are MTSU graduates is because the core study that’s offered within the College of Media and Entertainment is so relevant to what we’re doing in the industry. It’s not similar to what we do — it’s what we do.

“When graduates come out of the program, they have the skillsets that I actually need… It makes my job very easy.”

“It’s pretty cool” to be back on campus, she said. “MTSU is churning out some good folks…. Reba’s at the top of her field, so it’s cool to see young people learning from those who have been around a little bit.”

In her experience, “MTSU seems to be getting to be more of a part of our (entertainment industry) world. They’re churning out so many majors and backgrounds and industries.” 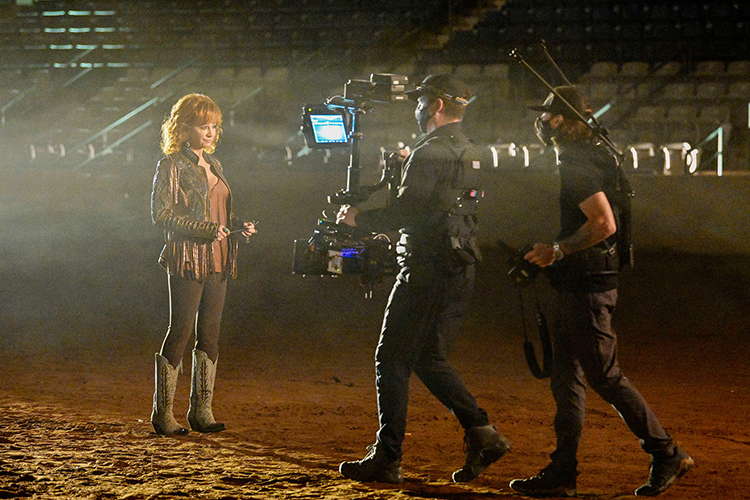 Tony Reyes, a freelance Steadicam operator and another MTSU alumnus, said, “Being in school and being at MTSU gave me the time to grow up and mature a little bit and also find more of what I wanted to do in production, as opposed to just jumping in and being locked into a position for a very long time.”

He’s been very successful since his graduation in 2007, working for the Tennessee Titans and more big-name musicians.

The “hands-on activities (at MTSU) are massive. I think that was the biggest thing,” he added. “The other thing that I think has helped me a lot being from MTSU is the networking. That’s invaluable. That’s something that I had to learn as I went along.”

Student workers on set voiced these advantages, too.

“Everything that I’ve learned throughout these past four years have all been MTSU,” said Litzenberger. “I really credit the university for everything that I’ve achieved…. Not only did I get an education, but I met all the people who will help me further that education and also help me put it to use.”

Keel said she hopes that word from the shoot will spread amongst the influential and active industry people on set. “I love having industry people spend time on campus because it’s impossible not to fall in love with MTSU once you’ve been here,” she said. 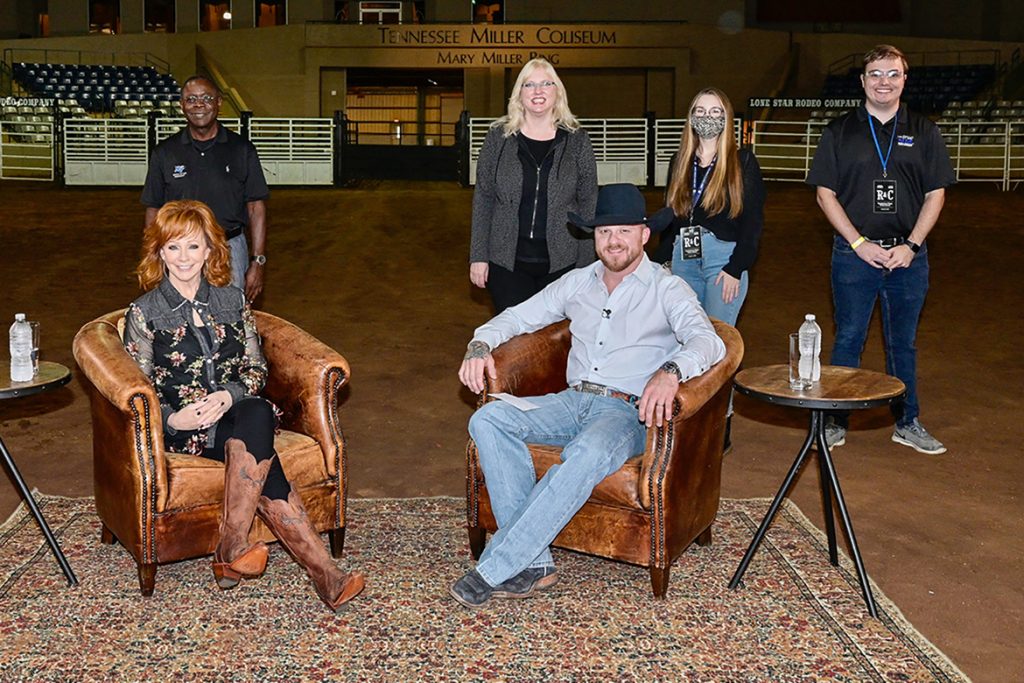