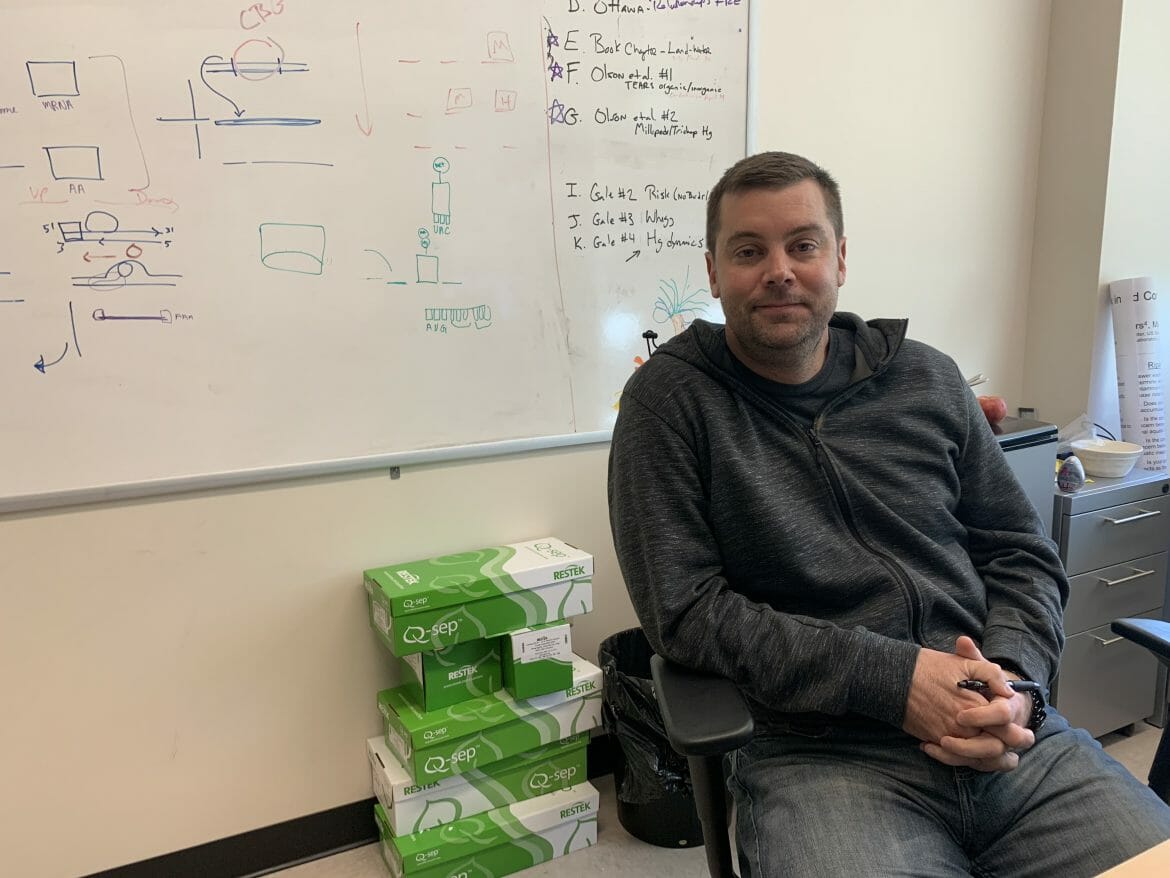 Did you know that MTSU is unveiling what is considered to be the best database in Toxicology in the world? Today the Student Voice talks to Dr. Ryan Otter, a professor in the Biology department who played a big role in the project. Oh, and he’s a big fan of you all! Here’s what he had to say:

Thanks for agreeing to meet with us today! Tell us a little about your journey to becoming a professor in our Biology department.

My background is pretty non-traditional in one way and very traditional in another. Out of high school, I went to Michigan State University and got my undergraduate and master’s degrees, both in Zoology. Then, I took only a summer off before starting my Ph.D. in Environmental Toxicology, which is the study of pollution, at Clemson University. I finished up there and worked at Miami University in Ohio for about two years before arriving at MTSU in 2007. So, that’s the traditional route through academia. The nontraditional piece is that while I “picked” Biology, I didn’t really pick it at all. It was the thing that I hated the least. I was never the kid or person who just loved something with everything they ever had, college for me was just a way to make money not doing manual labor. Science was what was left after looking at everything else – it wasn’t the thing I picked, I just scratched everything else off. Science made a lot of sense to me and I enjoyed it, but I’m not the person who had a driving passion to do it my whole life. I decided that it fit me once I understood the business of science. As I was studying cells, energy, and life, I realized that I wanted to make money in this, so I studied both the business and the “nerd stuff” at the same time.” I think most people think of professors as people who pick something they’ve wanted to do since they were kid, but that’s not me.

So, you had a interesting college experience. Tell me something you would have done differently in college that you’d encourage your students to do.

That’s an easy one for me. Get out of the classroom and go do stuff. I was under the belief that a college degree and a good GPA was what I needed to be good in the business. That is not accurate, particularly in 2018.

You do need a good GPA and you need your classes, that’s true, but you also need experience outside the walls of a classroom to show people that you actually know what you’re talking about.

You do need the classroom pieces to qualify for a degree and to have the knowledge to understand what’s going on, but what’s important is that while you’re in college, also be doing things outside of college. It’s a big shift from what people understand college to be, and what they expect the competition in business to be, mostly because a lot of changes have happened in the last 30 years. What worked in the 1980’s doesn’t really work anymore. I want to prepare students for what post-college will actually be like when they get there.

What’s one of your favorite college memories?

Wow, there’s a lot in that bag. That’s a great question. I’ll go with two, actually. One is just sports and people. I loved meeting people from so many different backgrounds and realizing that pretty much everybody is the same. We may come from different worlds, families, geographic areas, languages, and all that sort of stuff. But man, people just like to have fun, eat food, and laugh. Period. That’s the game, everywhere. That’s probably the big one for me, just meeting people that I didn’t think were like me, but realizing we’re pretty much the same.

The other one is when I actually started getting involved with research. I’ll be honest, I never liked being in class. When I got exposed to scientific research, that hit me like a ton of bricks, because I like to solve really complex problems. I’ve been like that since I was a kid. Someone showed me that I could do that, then they offered to pay me to do it. They said, “Well, this is what we do at universities and colleges,” and I said, “No, it isn’t! You just go to class!” They told me I had no idea what I was talking about. When I realized that, it was a huge moment for me. It showed me why I was going to class! It started as me going to class because I was told to, until I realized what I wanted, and then it became me doing it because I didn’t want to lose research opportunities.

Speaking of your love for research, what projects are you currently working on?

I’ve got a couple right now that are really interesting! One big one is just winding up, one that my whole team has been working on for 3 years in the Appalachian Mountains, particularly the Great Smoky Mountain National Park and the National Forests that surround it. We are looking at pollution levels in the mountains, as no one’s ever looked at it very much. There’s been a big partnership between MTSU, other universities, the National Parks Service, and the state. I’ve had a team of undergraduates, master’s students, Ph.D. students, all involved in learning more about it.

Another project I’m working on is in the Great Lakes Region, looking at the most contaminated sites in America, and how different engineering practices can help make those polluted sites better.

A third project is about to launch publicly soon in California, where myself and some collaborators in the Computer Science department here at MTSU have built the best database in Toxicology, I would say, in the world. And we house it at MTSU! The computer science partnership manages all the data and built all the interfaces, and it will be utilized by some of the largest companies in the world. It’s a leap in data management to the 21st century, and we’re at the forefront of that.

That’s really exciting! For those wanting to take a class with you, what classes do you teach? Also, which is your favorite?

I currently teach Intro Biology (BIO 1110), as well as the Senior Seminar, so I basically play the bookends with my courses. In the spring, I typically teach (and help teach) some graduate and Ph.D. courses. I also teach BIO 1000, which is the introductory course that helps students understand what they’re getting themselves into if they are interested in Biology. That course can is really interesting and you don’t have to a Biology major.

BIO 1030 is probably my favorite class, even though I haven’t taught it in a few years and it is designed for non-Biology majors . As a professor, I see it as a group of students in their only science course in college. I get four months to say, “Alright, let me show you what scientists do, so you can respect and understand the world from their point of view.” I think it’s the same for people who take things like Dance or Theatre Appreciation. It’s not that they want to be dancers or actors, it just makes you appreciate the world through a different lens.

In the Biology major content, Bio 2 is probably my favorite. It is mostly focused on plants and animals, so it is a four-month course that takes a look at what all living things have in common, noting the small difference between them. Really, all living things are doing the same thing. They are trying to go get food, not be food, and reproduce. Then we get to look at the diversity that exists in plants and animals, knowing how similar they are. That’s really fun to do because of the driving theme tying everything together.

Teaching is an interesting question for me, because I never taught during college. I never tutored, I never was a supplemental instructor, and I never taught during my graduate times. It wasn’t until I was done with school that I actually tried teaching. It took one time in a non-major course, and I realized that I really hated classes for most of my time in college, so I wanted to do it how I would have wanted it! It wasn’t opposite of how I taught, it was just about what would have kept my interests. I try to keep those things in the forefront of my mind.

I really like the lightbulb moments that happen in class, when I can connect the real world to the “nerd world” of Biology. I was taught the “nerd world” very well, but it took me until I started doing research to understand why I was learning it. So when I teach, I try to relate everything to something going on in the world of my students.

The best thing about MTSU is easily the students. I feel that the students at MTSU are very, very similar to the person I was when I was going through college. For me, finding a university with students that I can relate to, that’s extremely important. I drive all of my projects and teaching towards whatever is best for our students.