The Changing Faces of STEM

A big New York Yankees fan since interning with the team years ago, Kim Page never figured her actuarial science background at MTSU might mix so well with her passion for baseball. But Page, who works full time as a math instructor at MTSU, has made that combination work professionally for the past five years. She does so by spending a good chunk of her spare time doing what thousands of hardcore baseball fans might enjoy — dissecting the statistical data of minor league pitchers and predicting their futures for SIGMA Actuarial Consulting Group Inc. of Brentwood. 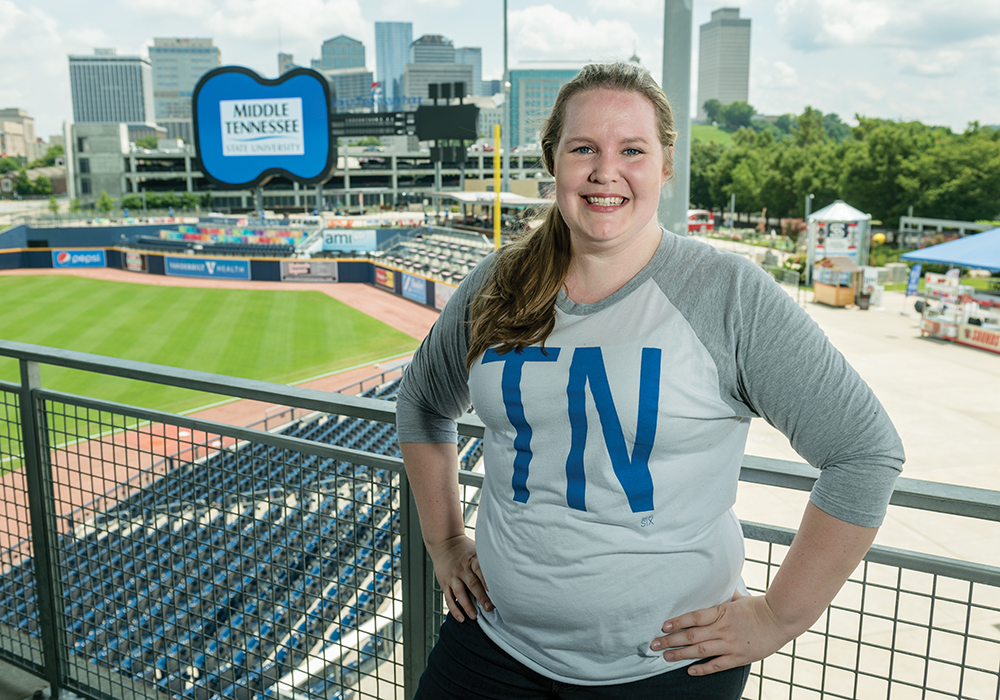 Page takes her best stab at determining which players might become major league stars and which might need more help in the minors. She presents her findings every other year at the Actuarial Research Conference and has talked with both Major League Baseball and STATS LLC about sharing her prized information with them, as well.

“I love, love, love what I’m doing now,” said Page, who earned her master’s with an actuarial science concentration from MTSU in 2015. “I love teaching at MTSU. It’s a great place. And (the baseball work) is just a really fun thing to do on the side. To me, it’s really interesting.”

Page’s efforts on the baseball front and as an instructor illustrate yet another success story for MTSU’s Actuarial Science Program, which is pumping graduates into the field at an ever-expanding rate — many with a job in hand before they leave school.

Actuarial science students use mathematical skill, statistical techniques, and computer algorithms to manage risks and solve problems, most often for insurance and pension programs. The profession is a growing one, as the U.S. Department of Labor estimated that employment of actuaries would increase 22 percent from 2016 to 2026, much faster than the average for all occupations.

That’s good news for MTSU, which is the only university in Tennessee that offers actuarial acience coursework for both undergraduate and graduate degrees.

When Don Hong, now the Actuarial Science coordinator, arrived at MTSU in 2005, there were only 40 students involved in the program—and just one or two graduate students studying actuarial science under the M.S. math program. But he’s engineered great change since then.

In 2010, MTSU established a new concentration in Actuarial Science under the Master of Science in Professional Science. That attracted plenty of out-of-state students who had completed their bachelor’s degree in math or business, but were looking to continue in the actuarial science field.

Another factor in the program’s growth has been an international collaboration with sister schools in countries like China—where Hong grew up—and Ghana, further boosting enrollment.

The bottom line is that MTSU’s Actuarial Science program featured a combined 112 undergraduate and graduate students in Spring 2018, nearly tripling the 2005 figure. Sixteen of 25 students in their final year in 2018 were accepted into graduate school, and several others received job offers.

All those MTSU numbers were likely to increase this fall, when there were more than 30 graduate-level students alone studying in the field.

“We’re very proud because the numbers have just taken off, and it continues to grow and succeed,” said Mathematical Sciences departmental chair Donald Nelson, who credits Hong with much of the Actuarial Science growth. “Our students are passing the professional exams in numbers nobody would have dreamed. I don’t know if the numbers have literally grown exponentially (since Hong arrived), but certainly by leaps and bounds through his effort.”

When he graduated from high school, Richardson wasn’t sure where he wanted to go to college or what he wanted to do with his life. But he knew he was pretty good at math.

So Richardson started researching local schools and potential fields of study, discovering the field of actuarial science and learning that MTSU had a program. Further research on his part revealed that the actuary profession was expanding, it paid well, and—if you could master a rigorous curriculum and pass a series of challenging professional exams—you’d probably wind up with a fulfilling job.

“If you’re motivated and willing to put in the time, it’s definitely very rewarding in the end,” said Richardson, a 2007 MTSU graduate. “I would highly recommend it if you love math.”

Richardson now works in Nashville as a consultant for Willis Towers Watson, the largest actuarial employer in the world. Most of his clients are large corporations or public entities—a few local, some national, and others based in foreign countries. In his job, Richardson uses actuarial methods to help self-insured clients, mainly assisting with workers’ compensation liabilities.

“We try to help them understand impacts on their businesses and help them make decisions accordingly,” Richardson said. “We provide them with a whole report that can be hundreds of pages, and then we kind of give them one paragraph: ‘This is what it means. This is what you need to do about it.’ ”

MAKING IT TO THE BIG LEAGUES

Richardson is among many MTSU Actuarial Science graduates who have stayed in touch with the school even after entering the professional workplace.

Once a year, for instance, Richardson speaks to Hong’s MTSU students about the career path he took, giving them a high-level view of an actuary and offering tips about what he did on the way to reach fellowship certification.

In addition, Richardson stays in regular contact with Hong regarding which new MTSU grads might make good hires for his company.

“He’s constantly sending out résumés of students to his network of people and getting people hired,” Richardson said of Hong. “We’ve hired, in addition to myself, several other alums from MTSU after they graduated, which is really one of the more important things when you’re in college. You’re paying all that money for a degree, so you want to have a job lined up when you graduate.”

Hong says he hears often from former students who are moving up in the world, and he always encourages them to keep today’s students in mind—making sure the MTSU network thrives.

“We say we do not expect you to return anything (after leaving), but just keep in mind one thing: You may like to help the next generation, your academic brothers or sisters,” Hong said. “That’s networking. And they remember this. We have a good connection. Graduates from our program like to shoot me an email and say, ‘Dr. Hong, we have an opening in our company. Maybe you can send information to (students who will be graduating).’ ”

Lauren Chrisman, who earned her master’s from the MTSU program in 2014, is a good example of a student who had a job waiting for her upon graduation. Like Richardson years earlier, she had originally been unsure of her career plan when she began undergraduate work at MTSU. Chrisman loved math and at first figured she’d be a school teacher in the field, but then changed direction and wound up graduating with a bachelor’s degree in Psychology.

She still wasn’t satisfied, though, and returned to her math roots after happening upon a flyer for the MTSU Actuarial Science program. Only a year into her master’s work in 2013, Chrisman had already passed two actuarial exams, which led to an internship at BlueCross BlueShield in Chattanooga. That experience in turn prompted a full-time actuarial job offer from Findley in Nashville, where Chrisman is now a senior analyst.

“That’s such a benefit of the field,” Chrisman said. “By the time I left school, I’d already been applying to different places, and I’d already received a few job offers.

Chrisman is a Franklin native, but many of MTSU’s Actuarial Science students come from much farther away—China. 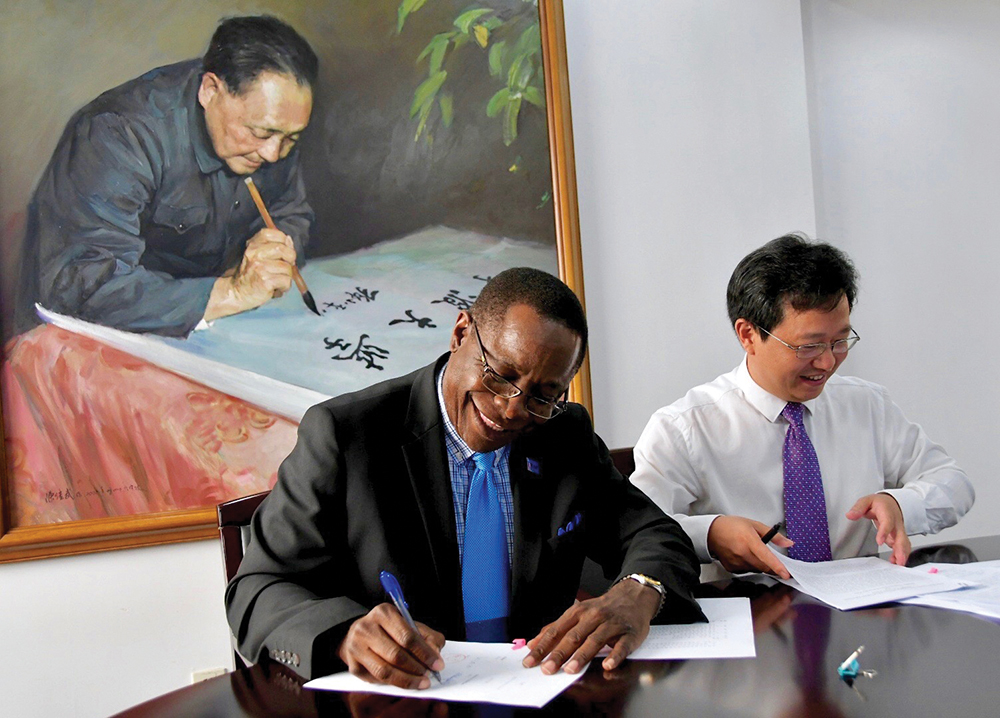 MTSU President Sidney A. McPhee, left, and Shao Qianium, vice president of Ningbo University in China, sign papers that renew the academic partnership between the two institutions. Behind them is a portrait of the late Chinese leader Deng Xiaoping, inscribing on a scroll the name of Ningbo University at its founding in 1986. (MTSU photo by Andrew Oppmann)

Hong himself left China to earn a Ph.D. at Texas A&M University in the early 1990s, knowing very little English at the time. His ability to overcome that challenge makes Hong a good recruiter when he visits Chinese schools that partner with MTSU for Actuarial Science study—like Ningbo University and Guangxi University.

Chinese companies, it appears, are every bit as hungry for MTSU’s accomplished Actuarial Science students as are American companies.

“Chinese companies often need actuaries to help with international collaborations—the Chinese company itself cannot handle those,” Hong said. “They have to have somebody familiar with U.S. insurance policies. . . . That’s why students come (from China) to MTSU and study Actuarial Science, to get familiar with insurance policies. With those risk management skills and actuarial science techniques, they can go back to China and work for those companies.”

Nelson says MTSU is already reaping benefits from the growth and success of its Actuarial Science degrees.

“People who are interested in actuarial science . . . if they do very much research at all, they’ll find out about our program,” Nelson said. “It’s being recognized nationally and even internationally for the success of the students. . .. From my perspective, I would absolutely say it’s one of our signature programs.”

To read this story and more read Innovations online!