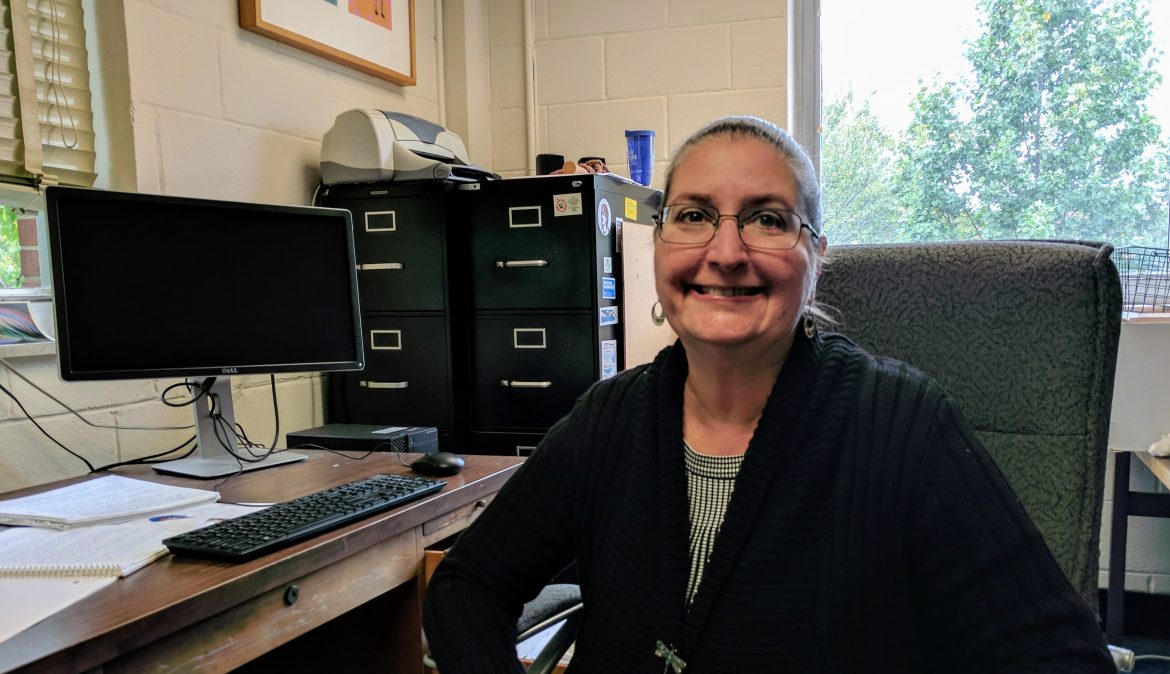 Today, the Student Voice is meeting up with Dr. Mary Magada-Ward of the philosophy department. Dr. Magada-Ward teaches courses in logic, linguistics, feminist theory, and many other philosophical topics, as well as serving as an advisor for the department.

Thank you for interviewing with the Student Voice today! First off, where did you go to school?
I went to undergrad at Bowling Green State University, where both my parents and my grandfather taught. I got my master’s and PhD from Southern Illinois University at Carbondale.

I was recruited into it! I was originally a psychology major, but when I was a sophomore, there was a visiting professor teaching a graduate-level class in epistemology, and I signed up for it. I loved it and did well in it. He told me to switch my major to philosophy so that I could “do all the interesting stuff without any of the boring stuff.” I’ve used that line on my own students, and it really brings them in.

What made you decide to go into teaching?

Well, I just always knew that I wanted to go to graduate school. When both my husband and I got into grad school, I was a waitress, he was a cook, and we had just had a baby, so we thought “We’d better go now”. And we actually made more money in grad school then we did at those jobs, because we got assistantships and other aid. Once I was in grad school, I thought “Man, I really want to stay in this milieu”. But I also thought that if I couldn’t get a job–because it’s hard to get a tenure-track position–I’d just go back to waitressing, because I actually really liked that. But I mainly got into teaching because I wanted to further explore philosophical work.

When I’d read something that I didn’t understand at first, and then eventually I did understand it–that’s a thrill that never gets old. But one of my favorite specific memories is about my dissertation defense, which was on feminist philosophy of science. What got me through writing my dissertation was listening to Aerosmith, and I also had a really great dissertation director with whom I’m still in contact today. Right before I defended my thesis, I told him “Okay, I’m going to go smoke a cigarette and listen to a song about violent female revenge”. He laughed and said “Should I take that as a threat?”, and I said “Take it any way you want!”. But it was a great defense and it went really well, so that’s a great memory.

I wish I had gone to more events on campus, such as concerts and lectures in other departments. That’s even true today: we’re so busy here in the department, but there’s also so much other stuff going on around campus. I wish I could attend more of it.

What is one thing about yourself that your students would never guess?

Some of my students may know this already, but my guilty pleasure is “The Real Housewives of Beverly Hills.” I’m obsessed with it! I can’t help it.

What is one class that you teach, which you’d recommend to every student at MTSU?

Actually, I have three: first, I’d recommend that everybody take Logic. It’s just enormously useful; logic helps you be a better consumer, a better voter, and especially a better writer. I think Logic should be a gen-ed option. Secondly, I’d like everybody to take a class that I’m teaching right now, Philosophy of Gender. It’s also cross-listed with gender studies, where it’s called Feminist Theory. I think philosophy of gender is very important to think about, because despite our best intentions, gender ideology still gets its claws into us in ways that really keep everyone from living life to the fullest. The third class I’d recommend is American Philosophy, which I’m also teaching this semester.

Who is your favorite philosopher?

I have lots of favorites, but my main figure is Charles Sanders Peirce, who was and is often still considered America’s foremost genius. He’s the founder of pragmatism, and he influenced William James and John Dewey greatly. He’s also a bit of a romantic figure: he had a scandalous romance with his second wife before they were actually married, he was probably bipolar, he had those terrible migraines called facial neuralgia, he was a coke fiend–which was how they tried to help those problems back then–but he was really a genius. Because of his wild personal life, though, he could never really find permanent employment at a university. It’s very bittersweet. It’s only been since around the late 20th and early 21st century–long after his death–that he’s getting his due. There are followers of his in Europe, in Brazil…he’s finally getting known for what brilliant insights he had.

What is some advice that you would give to your students about how to succeed academically?

The first piece of advice is especially for undergraduates, and that is go to class. This is more “do what I say, not what I actually did as an undergraduate”, because I wasn’t particularly good at this. I got good grades, but I had to work twice as hard because I’d oversleep, miss the lecture, and then try to learn it from the text myself. Second, take notes and take them by hand. Study after study has shown that writing stuff down improves your memory of it, and it also keeps you awake and paying attention in class. And third, if you’re having difficulty, come talk to your professors. The vast majority of faculty at MTSU came here because there is this impetus on teaching, and we care very much about people succeeding. If you’re feeling overwhelmed, come talk to us or email us.

Why did you choose to teach at MTSU?

I really fell in love with the office culture and my colleagues here in the department. Aside from a few newer colleagues of mine, most of us are around the same age, we have kids, we’re all feminists–we have a great deal of solidarity, and that’s something that really appealed to me when I came here. They’re just all a lot of fun.

If you’d like to find out more about the philosophy department at MTSU, take a philosophy class, or contact Dr. Magada-Ward, click here to go the department’s homepage.