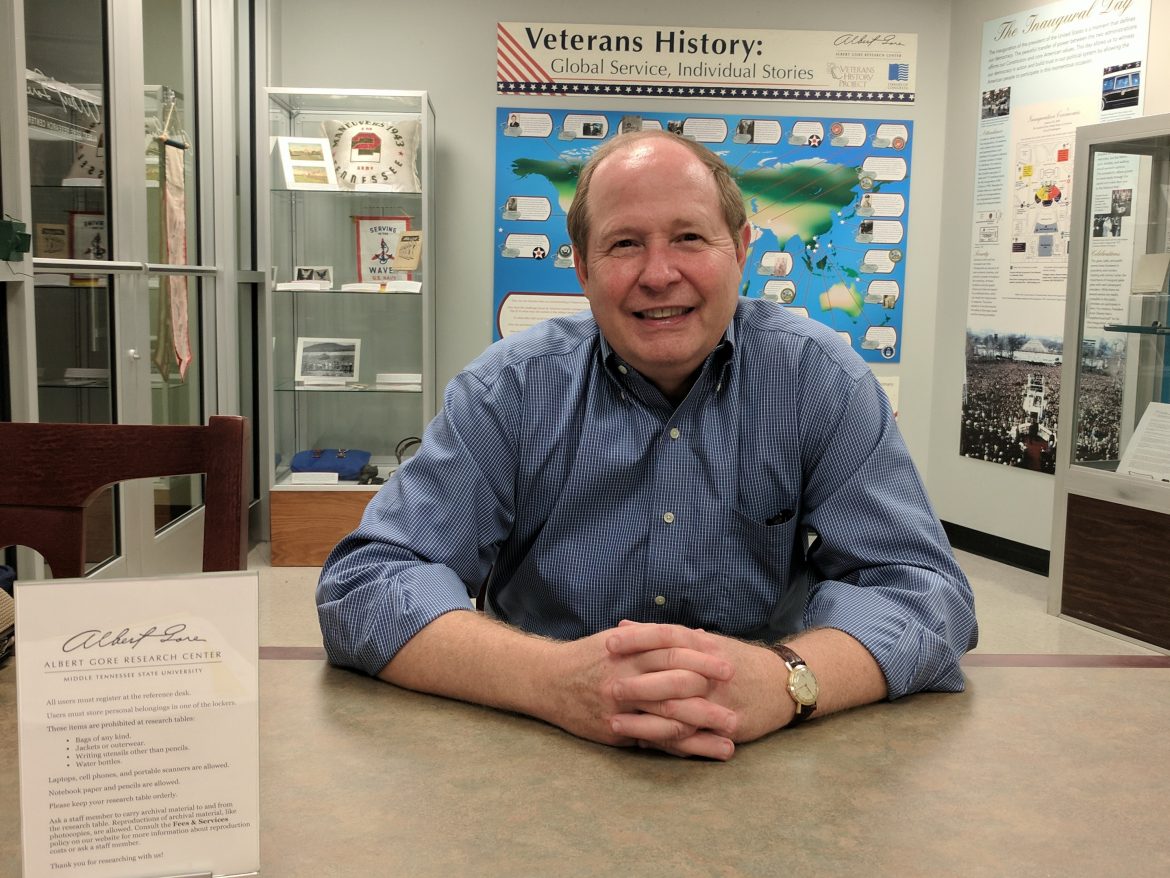 For this MTSU Student Voice Faculty Spotlight, we’re meeting up with MTSU alum and current professor Kent Syler. Professor Syler splits his time at MTSU between teaching political science courses and acting as Special Projects Coordinator with the Al Gore Research Center. Having received both his degrees from MTSU, and later returning to teach, Professor Syler serves as a great example of True Blue spirit.

First off, thanks for agreeing to interview with the Student Voice today! So how did you become interested in political science?

I grew up in Winchester, Tennessee, where I had a favorite teacher who ran for superintendent of schools, and I decided to help out her campaign over the summer and knock on doors. We lost miserably, but that was my first introduction to the world of campaigns and politics. Then when I came to MTSU in the 1980’s, I ran for freshman senator in SGA and won, then I ran for sophomore senator and won that as well. I later ran for SGA Speaker, and then for SGA president and won. I was highly involved in student government in college, and that is really what got me interested in politics.

When and why did you decide to teach politics?

When I graduated from MTSU, I went to work for former Rep. Bart Gordon. Gordon was a former MTSU student body president as well, so he knew a little about me from student government. When I graduated, he had just become chair of the TN Democratic Party and needed an assistant, so I went to work for him for 2 years. Then when Al Gore Jr. ran for Senate, it opened up his Congressional seat, and I spent the next year running Bart’s campaign [for state congress]. We were lucky enough to win and stay there for 26 years. In 2002, Dr. John Vile, the MTSU chair of political science at that time, asked me if I would teach a campaign management class as an adjunct. From then on I taught campaign management in the spring of every year, and I really enjoyed doing it.

What motivated you to start teaching full-time?

In 2010, Gordon decided not to run for re-election; I was 52 and I had to figure out what I wanted to do next. I decided that I really enjoyed teaching, and I was able to talk them into hiring me full-time. I’m in my 7th year of teaching now, and I would never have been able to do it if I hadn’t taught as an adjunct. Another thing that precipitated being able to teach was that we almost got beaten in 1994. We won by a tiny percentage, and I had a 4 year old and a 1 year old, and you know that when you have to run every 2 years that it’s not a very secure job. So I decided to go back to school at MTSU, take night classes, and get my master’s.

So you went back to school much later as an adult student?

Yes, I went back here as an adult student because MTSU is a great resource, and it was a good thing that I did. Had I not done that–even though at the time, I didn’t need a master’s for anything that I knew of–I wouldn’t have been able to do what I do now.

If you could recommend just one of the classes you teach to every student at MTSU, which class would it be and why?

I’d say my campaign management class. I teach American government, campaign management, a class on advertising and communications, and then I do specialized courses all during the [Presidential] campaign season. We’ll do presidential pre-gaming, we’ll do a primaries course, and then a general election course. I think those themed ones are great, but if I had to choose one that I teach all the time, I’d choose the campaign management course. It teaches a lot of the practical aspects of running a campaign, such as communications tools that you can use even if you never run a campaign. Also, if you’re a consumer of political communication, it teaches you to be a better consumer. You can learn if they’re trying to manipulate you or not. You can even use these tools to put together a resume, to make yourself look better to a potential employer; you learn how to package yourself and advertise your strengths.

What behaviors do you like to see in your students that help them succeed in class and in life?

I want them to come to class (laughs), and I’d like them to participate in class–all my classes are EXL [experiential learning], so they’re very hands-on and participation is very important. And I’d like them to come in with an open mind about the other party, to understand that just because they’re the opposite party doesn’t mean they’re the enemy, and that there’s a lot of things you really agree on. We need to open a better dialogue, and honestly I think my students are really good at that.

And your campaign management class helps with that, because the structure of the class places people on different teams for pretend campaigns that might not align with their real political views.

Yeah, it forces them to look at something from another angle.

I probably should have done a better job of balancing classes and student government (laughs). I erred on the side of SGA and other extracurriculars lot of times. I probably could’ve been a better student. I think that’s one thing that makes me a more understanding teacher.

We had a huge rivalry with Tennessee Tech when I went to school here, and we had these back-and-forth pranks with them. They “kidnapped” our totem pole trophy, so we retaliated by “kidnapping”–at one time or another–the editor of their paper, their student body president, and the eagle, their mascot. It was all in good fun though. You’d probably get arrested for it now, but back then it was all with the administration’s approval. We even flew an airplane over their homecoming and dropped 50,000 little pieces of paper with MTSU logos on them. They were doing stuff to us too, of course; but nobody was vandalizing, nothing got damaged, nobody was hurt. It was fun.

Let’s hear some more about the kidnapping of the eagle! Was it a live eagle?

Oh no, it was a guy in an eagle suit. So we were on our way back from letting a bunch of pigs and chickens loose in their campus grill, and we saw a sign at a restaurant called Burger Queen that said “Come see the Tech Eagle today from 2-4”. So we came back to MTSU, hatched a plan, went back to the restaurant, and told the mascot guy a story to go give a coke to a sick child that was in the car and couldn’t come out–yeah, it was awful (laughs). And we had a guy wrapped in a quilt laying against the car door, so the eagle would have to crawl into the car and hand the coke in. When he did, we dove on him, got him in the car, and went to switch cars behind a warehouse. The eagle said “You guys from Middle?” and we said “Yeah”, and he was fine.

How would you recommend that students apply the skills from one of your classes into real-life situations they may encounter?

I think there’s several ways: the first is being a better consumer of political information. Most political messages are trying to get a reaction from you, and now unfortunately they’re often trying to make you mad. I want my students to understand that if they want to get political information, they need to go to a wide variety of sources. We get into echo chambers where we look for information that simply confirms our beliefs, and it gets amplified in social media. So get your news from different sources, stay out of echo chambers, and stay involved. And even if you never run for political office, learning campaign management helps you be a better citizen, and it helps you communicate your strengths to future employers or organizations you may lead. These skills give you the ability to put a message together and send it to as many people as you can. We deal with crisis management too, and we learn how to get through things when they happen. This relates to team-building as well, and dealing with teams where you have very different personalities. Frequently we have teams that have problems, and they want me to step in and solve everything for them, and I say “no, it’s your team, work it out”. And they do, because that’s what real life is going to be. When you’re working with teams at your job, you can’t always just call somebody to come in and mediate. You have to learn to get through it.

If you’re interested in taking a class with Professor Syler, check out the MTSU course catalog  or the political science department website.