School of Music events to give.. 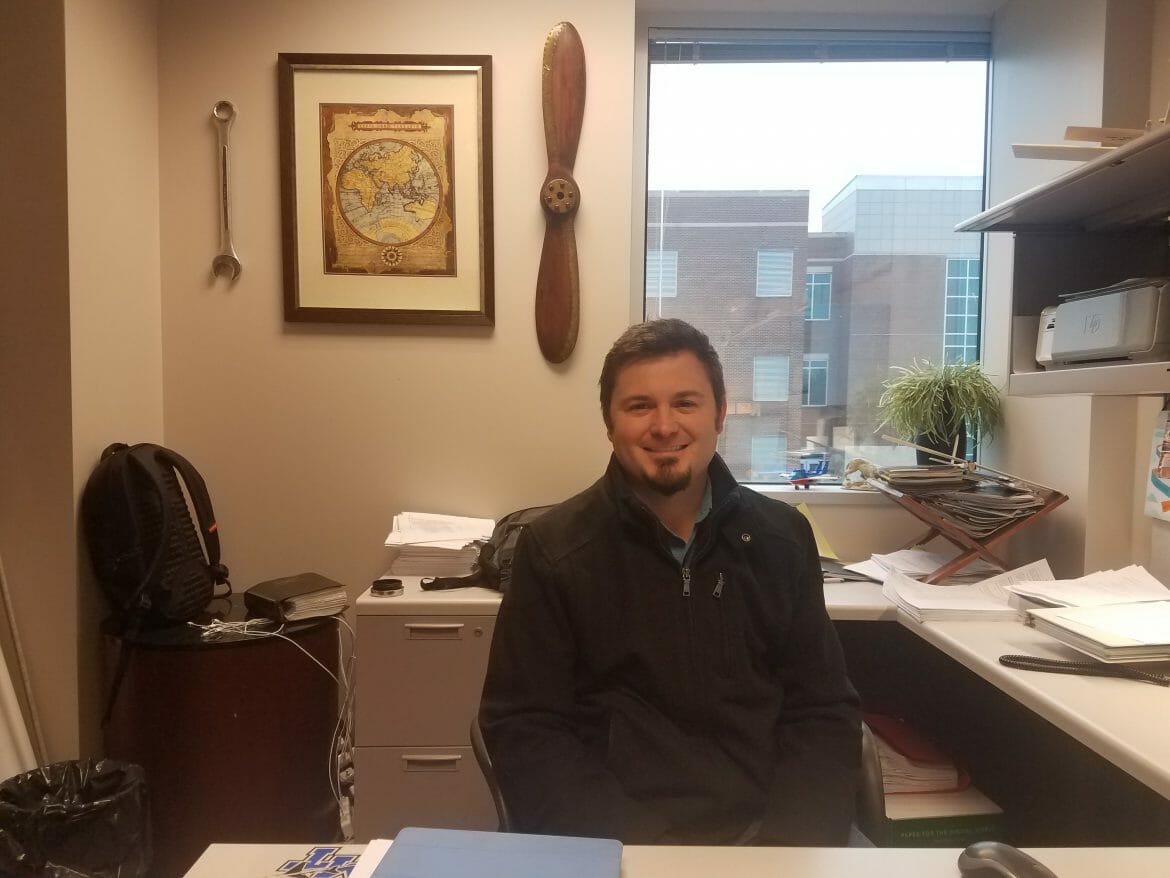 Today, the Student Voice is hitting the skies and talking about new aviation technologies with Tyler Babb, a faculty member in our Aerospace Department! If doing military-grade climbs in a private jet makes you feel queasy, don’t worry – it makes me feel the same way. Read on!

Thanks for speaking with us today! First of all, tell us a little about your journey into aviation and teaching.

I was interested in aviation as a kid, we went to air shows all the time. I had my “a-ha!” moment on my 16th birthday when I went on an discovery flight (the first lesson for prospective pilots), which was my first time in a small plane. I was hooked! I grew up in Kentucky and was looking at aerospace programs, and while they had one up there, my mind was made up when we set foot on this campus. I came to MTSU as an undergraduate student in 2003. I graduated and got my Master’s degree while building my flight time before working in the industry from 2008 to 2013. I worked as a charter pilot, so I flew small jets for people with lots of money, wherever they wanted to go. I got into aircraft maintenance in 2011 and 2012 before a faculty member contacted me in 2013 about an opening he thought I’d be interested in. I’ve been at MTSU a while now!

I have to ask… what is your favorite plane to fly?

Well, I’ve only flown a handful. Some pilots have flown dozens, if not hundreds of types, while I’ve only flown about 8-10 different types. I flew old Learjets, which were old and crude with very little technology in them, but they would climb really well. They would perform really well, especially when they were empty, so that was probably the most fun I ever had in an airplane. We would climb like military jets do, which is extremely quick for a civilian airplane – when they let us. Those planes were a challenge to fly, but they were fun.

What courses do you teach and which is your favorite?

When I came in 2013, and it hasn’t changed, I said that I wanted to teach the “building block courses,” because I couldn’t teach some of the more advanced stuff in our Pro Pilot curriculum and I had my input on those things as the Coordinator of Programs. I mainly teach our Private Pilot ground course and our Instrument Pilot ground course, which have different names, but that’s basically what they are. I get people that are like, day one, “I want to fly…what’s this all about?” It’s almost introductory, but it can’t be because we train to Federal Aviation Administration standards. I do the first two of five courses in the Pro Pilot sequence. I teach the third course in the summer, but I do the first two every semester. I occasionally teach Weather and Theory of Flight, but we’ve had a huge influx of Pro Pilot majors, so the Pro Pilot faculty primarily focuses on the main courses now. Our number has grown from 300 to just under 500 students in the Pro Pilot concentration!

So, you teach curriculum that is unlike most other majors. What is your favorite thing about teaching?

I do enjoy teaching, it is my favorite obligation as a faculty member. I just really like those “a-ha!” moments and seeing students understand something that they didn’t understand before. Just before you came in, a student was in class this morning, and there was just one thing she just wasn’t quite getting. I think, “maybe if I just draw it one more time, she’ll understand.” I did it again, and she just said “Oh!” and I said “Yeah!” I just love those moments. That’s really rewarding to me and something I’d like to do for tree. When they say “do something you would do for free, but get paid for it,” I took that to heart. I love those moments.

Tell us a little about your iPads, or *ahem*, Electronic Flight Bags.

My company, in 2011, adopted using Electronic Flight Bags, which are basically just iPads with software, instead of our old paper charts. We used to carry around boxes and boxes full of charts. Our Learjets had every chart for every runway in the United States that had at least 5000 feet of runway. We had twelve volumes of these huge books for each airplane, and we had to update them every two weeks! It was a total pain. Now, those are on iPads and we only need to tap them to update. I experienced that transition at my company, and when I came to teach here, I thought the students would do what we did back in the day with all the paper. But they didn’t, they all had these iPads! So I started to publish and found out the popular softwares they used, and I’ve gotten to the point where I use it so much that my job would be hard without them. I’ve also found, however, that in some cases the software simplifies things to the point where we don’t need to fully understand things anymore. If the software is up, we can just plug our numbers in and go. I think that could be a potential danger, because if you really don’t know what you’re doing and the iPad is dead, where does that leave you in the cockpit. That’s what I’m really interested in exploring, whether it can become a crutch and when we don’t have our electronics, do we forget how to fly? Outside of that, the benefits of these things are huge, but I’m looking for the drawbacks, “gotchas,” and unintended consequences of these devices.

Cool stuff! Other than flying or teaching, do you have any other hobbies?

Well I’m engaged and getting married in December, so I’m very busy. But I do enjoy playing golf a lot. I’m not very good, but I really like playing it. I’m a dog lover, so every day at 3:30, I’m telling my students that I need to leave to take care of the dogs. They need attention, and I love our dogs! So if it isn’t class or work, it’s dogs or golf. That’s about all the stuff I have time for.

To wrap it up, what is your number one tip for student success?

I would probably say focus. Especially nowadays, it is so easy to lose focus on what your goals are. So if you are in a degree program, and your goal is to graduate and work in that field, try your best to stay focus. I see students a lot of the time who don’t prioritize classes and studying, then look up after 2 years and are in a big hole. I like to keep it to one word, so, “focus.”