Middle Tennessee State University faculty and staff have received a number of external recognitions this spring. Here’s a roundup of some of those achievements:

Dr. Priya Ananth, an associate professor of Japanese in the Department of World Languages, Literatures and Cultures at MTSU, was awarded the 2019 SEATJ Teacher of the Year Award by the Southeastern Association of Teachers of Japanese, or SEATJ.

The award was presented at the 34th SEATJ Conference on March 2 at Wake Forest University in North Carolina.

A quote from the award letter noted: “We are impressed with your dedication to your students and the advocacy for Japanese studies at MTSU. We are also very thankful for your leadership and contributions in the field, not only at SEATJ but also at the national level.” 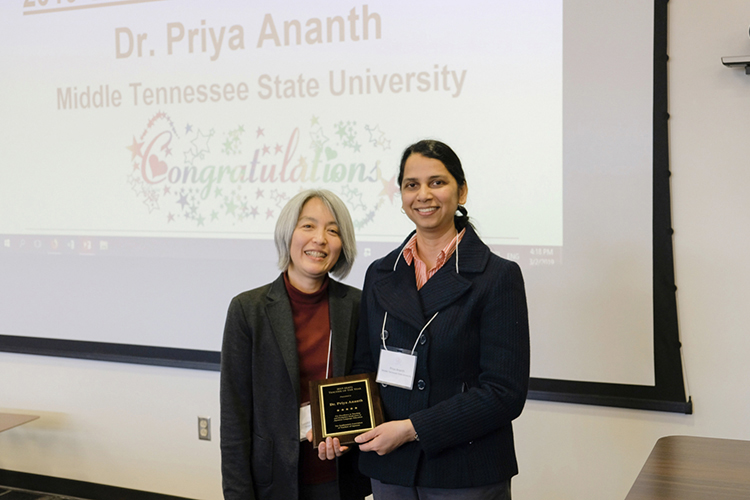 Dr. Priya Ananth, right, an associate professor of Japanese in the Department of World Languages, Literatures and Cultures at MTSU, receives the 2019 Teacher of the Year Award from the Southeastern Association of Teachers of Japanese, or SEATJ, at the group’s March conference at Wake Forest University in North Carolina. (Submitted photo)

LaToya Eaves, an assistant professor in Global Studies and Human Geography at MTSU, was recognized with two honors this spring at the American Association of Geographers annual luncheon in Washington, D.C.

The AAG is a nonprofit scientific and educational society founded in 1904. The AAG promotes discussion among its members and with scholars in related fields, in part through the activities of its affinity groups and more than 60 specialty groups. 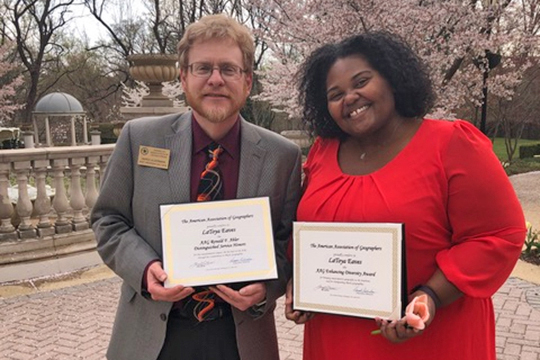 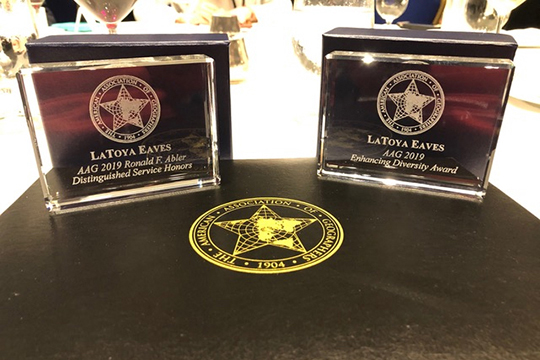 AAG Honors are the highest awards offered by the association. They are offered annually to recognize outstanding accomplishments by members in research and scholarship, teaching, education, service to the discipline, public service outside academe and for lifetime achievement.

Although the AAG and its specialty groups make other important awards, AAG Honors remains among the most prestigious awards in American geography and have been awarded since 1951, according to the AAG website. Nominations are invited from individual AAG members, specialty groups, affinity groups, departments, and other interested parties.

The AAG Enhancing Diversity Award honors those geographers who have pioneered efforts toward or actively participated in efforts toward encouraging a more diverse discipline over the course of several years.

The AAG noted that Eaves “has worked to bring emancipatory geography to the forefront through institutional advocacy, mentorship, community engagement, and intellectual production. Her scholarship engages and informs racial, gendered, and sexual dimensions of identity and politics.

“She is widely applauded for her commitment to establish the AAG Black Geographies Specialty Group, and for her support of other under-represented groups of geographers. Her dedication to the discipline and the AAG has inspired many graduate students and faculty to engage in Black Geographies thought, and is also influencing some departments to seek out scholars whose research involves Black Geographies.” 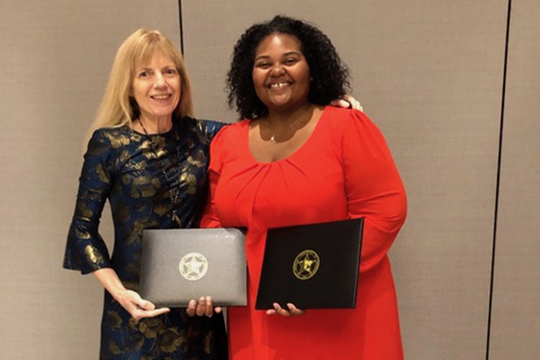 Dr. LaToya Eaves, right, an assistant professor in Global Studies and Human Geography at MTSU, is pictured with Dr. Sheryl Luzzadder-Beach, president of the American Association of Geographers, at the association’s luncheon earlier this spring in Washington, D.C. Eaves holds the two award certificates she received for the Ronald F. Abler Distinguished Service Honors award and the AAG Enhancing Diversity Award. (Submitted photo) 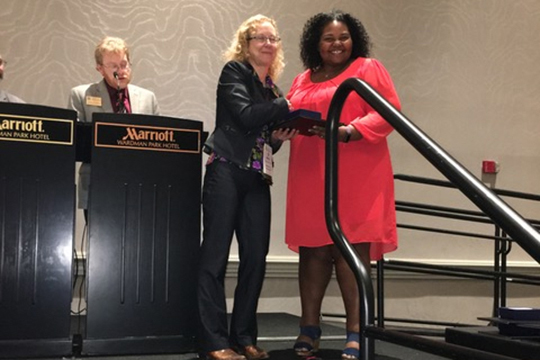 Terry Logan, emergency operations manager at MTSU, has been named emergency services director of the Tennessee Wing of the Civil Air Patrol. 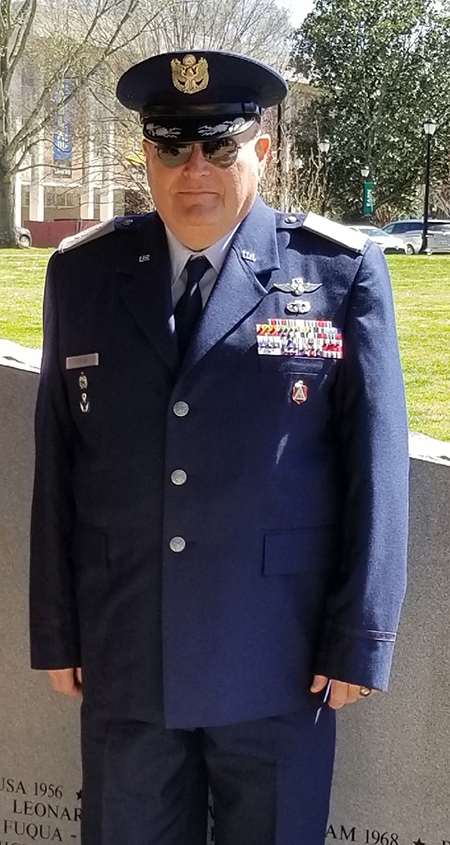 As emergency services director, Logan, will be responsible for coordinating the emergency response activities for the Tennessee Wing of CAP, an auxiliary unit of the U.S. Air Force best known for its aerial search and rescue missions, cadet program and commitment to aerospace education.

Logan said he will be responsible for emergency operations training, command and control exercise planning and mission planning.

“This is an honor,” he said. “It’s kind of broad and every day is different.”

Logan has a long history with CAP, starting out at age 14 as a cadet. He later served on mission staff coordinating ground and air activity and has been a team leader and an aerial observer. He still teaches each summer on staff at the Hawk Mountain Ranger School in Pennsylvania.

Logan noted that CAP’s core values of integrity, respect, excellence and volunteer service is “something we teach the cadets, and the senior members as well, all through the program.”

Dr. Sekou Franklin, an associate professor in the Department of Political Science and International Affairs at MTSU, was installed this spring as the 40thpresident of the National Conference of Black Political Scientists.

“Our organization has critically challenged institutional racism (and other systemic inequities) inside and outside the academy; bridged the divide between mainstream institutions and historically black colleges and universities; … hosted the nation’s leading elected officials, civil rights leaders and activists at our annual conferences; and provided pathways for graduate students and junior faculty to successfully navigate the difficult terrains of the academy.”

In recent years, the organization has issued public statements of solidarity and support for victims of the New Zealand mosque massacre and the white nationalist rally in Charlottesville, Virginia, which condemning the Trump administration’s effort to end the Deferred Action for Childhood Arrivals, or DACA, program. Learn more at https://www.ncobps.org.

SOURCE Nashville, a networking organization for women in the music industry, recently announced its seven newest honorees — including MTSU’s Recording Industry Chair Beverly Keel— who will be inducted into the SOURCE Hall of Fame in August.

Presented by Springer Mountain Farms, this year marks the 17th anniversary of the SOURCE Hall of Fame Awards. Set for Aug. 27 at the Musicians Hall of Fame and Museum in the Historic Municipal Auditorium, the annual awards show will honor and induct a select group of “Women Behind The Music” into the hall.

According to the organization, SOURCE Hall of Fame inductees are nominated and inducted based upon peer recommendations, biographies, accomplishments, reputation, the number of years each individual has worked within the entertainment industry, and level of community involvement.

The Middle Tennessee State University Police Departmenthas been accredited by the Commission on Accreditation for Law Enforcement Agencies (CALEA) in Huntsville, Alabama.

Administered by the Commission on Accreditation for Law Enforcement Agencies Inc., the accreditation program requires agencies to comply with state-of-the-art standards in four basic areas: policy and procedures, administration, operations, and support services.