'A Constellation of Great Men'..

“A Great and Noble Undertaking: Remembering Tennesseans in World War II” will remain on display in the first-floor reference area during regular library hours through the end of the summer. 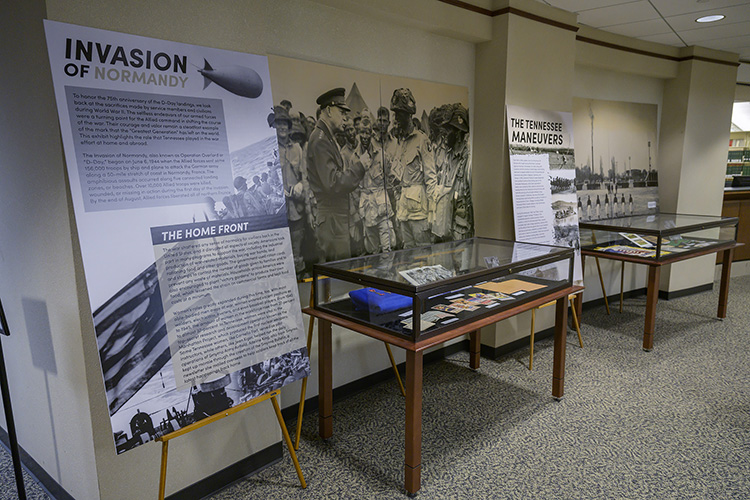 Panels introduce visitors to the James E. Walker Library to “A Great and Noble Undertaking: Remembering Tennesseans in World War II,” an exhibit created by the Albert Gore Research Center and the library in observance of the 75th anniversary of the D-Day invasion. (MTSU photo by Andy Heidt)

A joint project of the library and the university’s Albert Gore Research Center, the exhibit commemorates the June 6, 1944, Allied invasion of the beaches at Normandy, better known as “D-Day,” a pivotal event in the liberation of German-occupied France and, eventually, western Europe.

The display also sheds light on a little-mentioned aspect of Tennessee’s contribution to the war effort.

Following war games led by Gen. George S. Patton in the Camp Forrest area near Tullahoma in summer 1942, the U.S. War Department resumed training there on a regular basis.

The “Tennessee Maneuvers” eventually expanded to a total of 21 Middle Tennessee counties, stretching from Perry County in the west to Putnam in the east and from Sumner County in the north to Lawrence in the south.

Nearly one million soldiers passed through the area — chosen because the terrain closely resembled that of Belgium, France and Germany — during this training period.

“One of our richest areas, I think, in our collections is World War II documentation,” said Gore Center archivist Sarah Calise. “We have so many neat artifacts that people don’t get to see unless they come back here and research with us.”

The artifacts, most of which come from the Gore Center’s collections, include ration stamps, medals, wartime sheet music, photographs and morale-boosting propaganda. 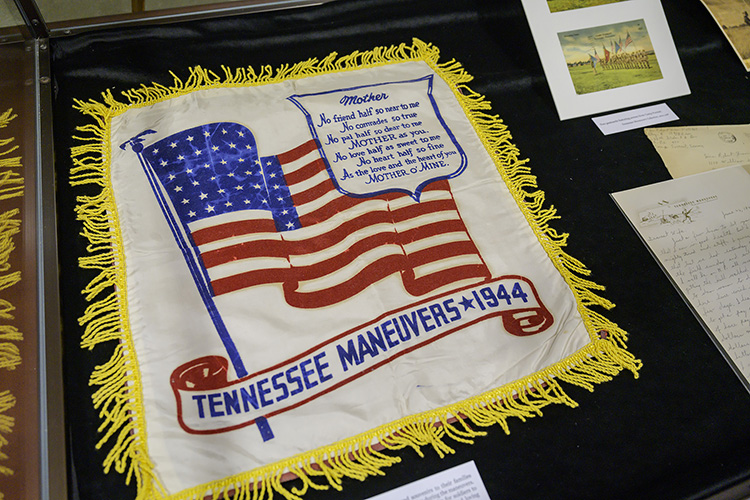 A sampler commemorates the “Tennessee Maneuvers,” a military training exercise that began near Tullahoma in 1942 on the site that’s now the Arnold Engineering Development Complex and expanded to 21 Tennessee counties by 1944. Nearly one million soldiers passed through the Tennessee Maneuvers Area. (MTSU photo by Andy Heidt)

Individual Tennesseans who are singled out for their efforts include Marion Skeen Coleman Peck, a journalist who covered the Tennessee Maneuvers and later became a public relations officer for the War Department in post-war Germany, and Rose Witherspoon Spence, an African-American corporal in the Women’s Army Corps.

“The Albert Gore Research Center has a strong commitment not only to archiving history and preserving history, but also to getting the word out to the public, to our students here at MTSU, the community here in Rutherford County, Tennesseans and anybody who’s interested,” said Dr. Louis Kyriakoudes, director of the Gore Center.

Taylor Walton, a graphic design major from Chattanooga, Tennessee, helped to create the look of the exhibit for the library. Marley Abbott, a master’s candidate in public history from Gallatin, Tennessee, researched the facts and the artifacts.

The exhibit is free and open to the public. You can enjoy a video preview of the exhibit below, thanks to Murfreesboro City TV. 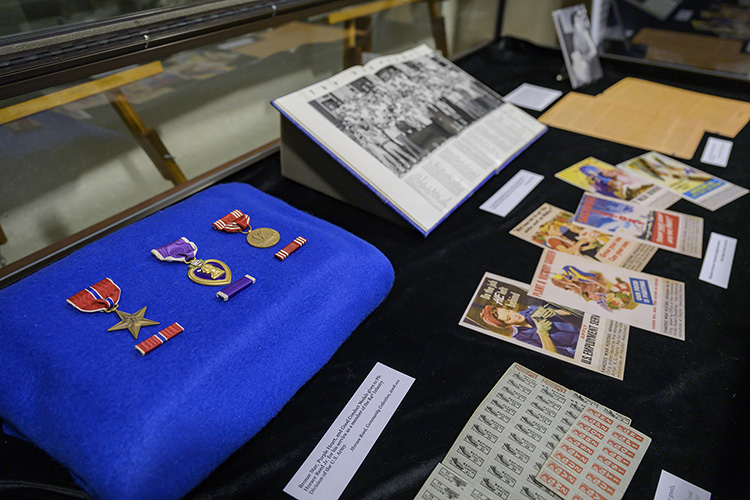 Some of the artifacts on display in “A Great and Noble Undertaking: Remembering Tennesseans in World War II” at the James E. Walker Library include medals, ration stamps, wartime propaganda and a 1946 edition of the Midlander, MTSU’s yearbook, with a photograph of military veterans standing in front of Kirksey Old Main. (MTSU photo by Andy Heidt) 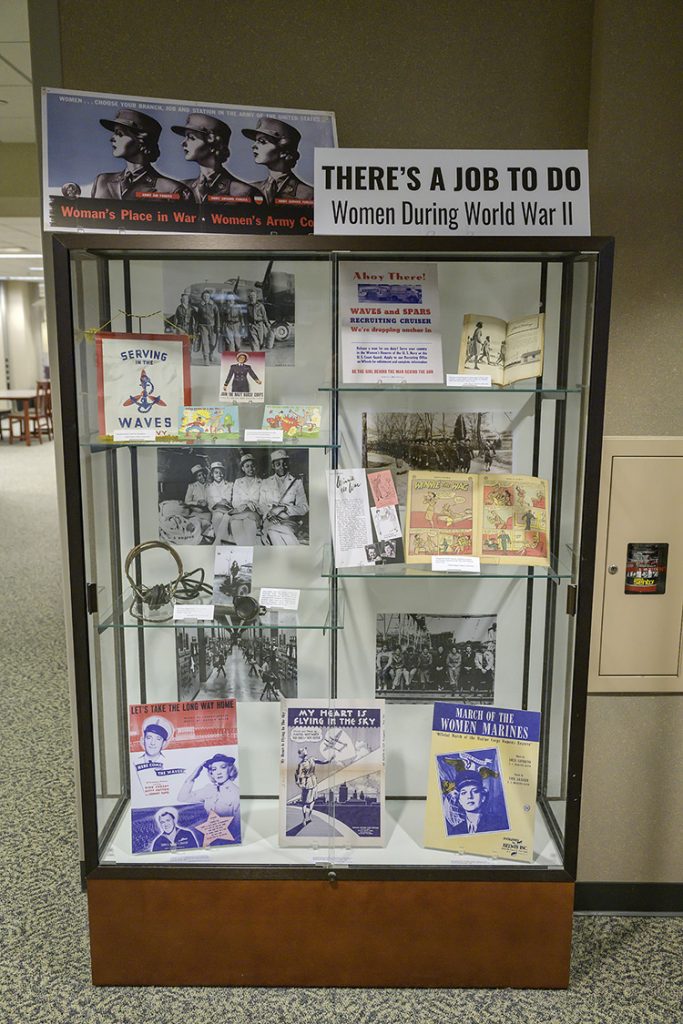 Women’s contributions to American success in World War II, both in the military and on the home front, are depicted in artifacts at the James E. Walker Library. (MTSU photo by Andy Heidt)