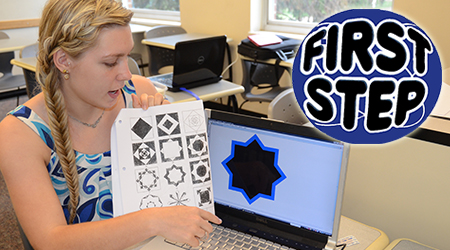 In this year’s experience, more than 40 students on nine teams were challenged by College of Basic and Applied Sciences’ faculty to perform research in STEM subjects. You can watch a video from the 2013 session below.

“They learn incredibly valuable skills to move them forward in the disciplines of their interest,” said Ginger Holmes Rowell, a professor in the department of mathematical science and the FirstSTEP program director.

FirstSTEP is a five-year, $2 million grant funded by the National Science Foundation. It is an enrichment program that provides financial and academic support for students majoring in biology, chemistry, computer science, engineering technology geosciences, mathematics, physics and astronomy.

“This is a really great experience. It’s an opportunity most people don’t get to have,” said Lindsey Smith, a sophomore physics major from Chattanooga, Tenn.

MTSU sophomore biology major Taylor Lane of Nashville takes a sample to test in the lab during the FirstSTEP summer research program. (MTSU photos by News and Media Relations)

Looking at a robot she built that will test a Wi-Fi shield, Smith added, “This right here is going to help me tomorrow, and what I mean is I’m wanting possibly to have a military career and I want to work with robots in the military. And now I have some prior knowledge about how robots work and the kind of hardware that they use.”

Jordan Peyton, an MTSU freshman computer engineering major from Memphis, Tenn., also has learned a great deal from the program.

“There’s a lot of things that I’ve done in this program that I can put on my resume, learned how to build a robot, learned how to do a lab report and learned a whole lot about applications that I’m going to be using in the future,” Peyton said.

Rowell said the participating students, nearly all of whom scored between 19 and 23 on their ACTs and need help in science, technology, engineering and math, gain “incredible confidence and skills that are valuable” from FirstSTEP “that will help them move one step further” in their progress as researchers and college students.

MTSU junior Chelsey Pennycuff’s FirstSTEP summer research involved triangle hexagon construction in a geometry sketch pad. Pennycuff, who has a double major in biology and math, is from Murfreesboro.

“The students demonstrated their research results with amazing confidence at the end of the program in presentation,” she said. “Some of the students will continue to work with faculty in this line of research.”