Research takes the stage at MTSU 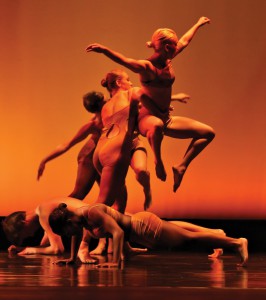 With Exodus, the MTSU dance program takes flight, not due to oppression as the title implies, but toward an emotionally gripping expression of experiential learning and academic research at its most artistic.

Exodus is a concert of modern dance and ballet that examines departures from a variety of cultural and historical perspectives. Its subject matter includes the Underground Railroad, the Holocaust, and Mexican border crossings.

“Every culture has its own exodus story that redefined who they were but also help define who we are currently in the United States,” says Kim Neal Nofsinger, director of the dance program and originator of two pieces of Exodus.

Thorough research into diverse ethnic identities is key to the creation of the work.

Several guest artists will contribute to the production, which is slated to debut in its entirety in January and go on tour throughout the spring semester. Students will audition for the privilege of being part of the company, and only 12–16 will make the cut.

“This is experiential learning at its highest form because it really is about synthesis,” says Nofsinger. “The students have to take all this information, put it together, have their own interpretation of what the content is, and be able to dialogue about that verbally.”

Nofsinger hopes to parlay this contrast of delicacy and power into the creation of an annual or biennial academic dance conference. Ultimately, the goal is to transform MTSU’s dance minor into a major leading to a baccalaureate degree suitable for propelling the dancers’ own exodus into performing and/or teaching.