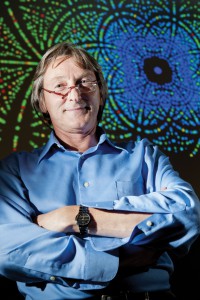 MTSU teams up with ORNL to imagine a cutting-edge scientific tool.

Imagine being able to see molecules composed of millions of atoms, a technique that could be used to create new designer medicines or technically important materials such as superconductors or shape-memory substances that have military, medical, and robotic applications.

Those are the possibilities of a research project being led by MTSU’s Dr. Tibor Koritsanszky, who is collaborating with colleagues at Oak Ridge National Laboratory (ORNL) on a project named, appropriately, IMAGINE.

IMAGINE uses neutrons to peer deep inside molecules. As the materials being studied reflect the neutrons and they scatter “just like a compact disc does when sunlight reflects off it,” they form patterns that reveal chemical, physical, and biological structure and function secrets, Koritsanszky says. Another way of describing it is that IMAGINE will identify the “fingerprint” of the molecules, he adds.

It’s actually a bit more complicated than that, which is why Koritsanszky and his colleagues at ORNL submitted a proposal in January 2009 to the National Science Foundation’s Major Research Instrumentation (MRI) program to obtain the device they now call IMAGINE, which is a single-crystal neutron diffractometer.

In August of that year, they were awarded $2.2 million to purchase the device and carry out research at ORNL. Some of the funding came from the American Recovery and Reinvestment Act, popularly known as stimulus funds. The grant is the third MRI for MTSU’s Department of Chemistry and by far the largest.

“This diffractometer will fill a gap in U.S. neutron diffraction capabilities, since no similar capability or instrumentation is currently available at a neutron reactor source in the United States,” says Koritsanszky, the project’s primary investigator.

IMAGINE, which is compact enough to fit into a small office, is under development about 30 or 40 meters from ORNL’s High Flux Isotope Reactor (HFIR). Bryan Chakoumakos, ORNL’s group leader for single-crystal neutron diffraction, expects it to be operational in January 2012. The speedy timeline is possible because the device combines off-the-shelf hardware with an optical system being developed at ORNL.

Chakoumakos expects researchers from MTSU, pharmaceutical companies, and other industries to use IMAGINE to examine samples that might be as small as one or two millimeters. The reactor will send neutrons speeding down a mirror-lined tube, called a guide, to IMAGINE. There they will strike the millions of atoms that compose the materials being examined and form intricate patterns of spots as they scatter.

IMAGINE will record the patterns on cylindrical image plates that surround the sample and can be thought of as reusable film. That, by the way, is how IMAGINE got its name.

“It’s meant to be stimulating and a play on words, since it uses image plates,” Chakoumakos says.

Researchers then will use a laser to read the thousands, even tens of thousands, of images on the plates and create a 3-D picture.

Koritsanszky, an expert in X-ray structural analysis and computational modeling, is writing the software that will help make IMAGINE the most powerful instrument of its kind in the world—more efficient than similar devices in Australia, France, and Japan. (The Japanese facility was untouched by the tsunami that ravaged nearby areas along that country’s coastline but was damaged by the earthquake that preceded the onrushing wave.)

IMAGINE will have the power to “collect an unprecedented amount and quality of data on relatively small samples in a short period of time,” Koritsanszky says. “Applications of neutron scattering research span the diverse scientific fields of structural biology, pharmacology, chemistry, condensed matter physics, nano-structured materials, [and] environmental and geological science.”

Koritsanszky has a longstanding relationship with ORNL, where he also collaborates with the facility’s $1.3 billion Spallation Neutron Scattering laboratory. Building on that relationship with the creation of IMAGINE was a natural outcome, giving MTSU the opportunity to win the National Science Foundation grant, which flows through the University, and provides MTSU faculty and students access to ORNL’s world-class facilities. In return, ORNL is able to tap into the University’s talent pool.

“We knew MTSU was starting new Ph.D. programs in computational science, molecular biosciences, and mathematics and science education,” Chakoumakos says. “Tibor’s goal is to use IMAGINE for research he’s interested in and to use it for education at MTSU.”