In the News: MTSU alumna takes.. 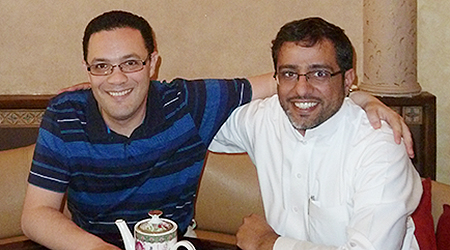 An MTSU history professor is not surprised at the recent turn of events in Egypt. In fact, earlier this year, before the ouster of President Mohammed Morsi, Dr. Sean Foley wrote about the likelihood that it would happen.

In a paper titled “When Life Imitates Art: The Arab Spring, the Middle East and the Modern World,” Foley wrote:

Dr. Sean Foley, at left, an associate professor of history at MTSU, pauses before a meal in Saudi Arabia with MTSU alumnus Abdullah Mohammed Alkobraish earlier this summer. Foley is in Saudi Arabia writing a book while on a fellowship. Alkobraish, a native of Riyadh, Saudi Arabia, earned his MBA from MTSU and is a former president of the Saudi Students Association. (photo submitted)

“In the long run, if social discontent among Arab youth merges again with a renewed political consciousness among soldiers and junior officers, then Egypt and other states may face a more dangerous revolutionary situation than it did in 2011 in which the present system will be ‘smashed.’”

Foley, an expert on the Middle East who currently is in Saudi Arabia on a fellowship to write a book, says Egyptian political activist Mohamed Abo Elgheit foreshadowed the overthrow of Morsi in a Facebook post during debate over a new constitution for Egypt.

In that post, Elgheit characterized several politicians aligned with the Muslim Brotherhood, the guiding force behind Morsi’s rise to power, as “old, weak and unable to relate to the youth.”

Foley wrote, “Unlike young Egyptians, these leaders had not shouted in public for the fall of military rule. They had not experienced the sensation of being alongside their friends at the forefront of mass protests, responding to bullets with stones. Nor had they felt the transformation of their fear of death into anger and great fury at the old regime.”

Several top officials of the Morsi regime were taken into custody July 4 after the military ousted Morsi and installed Adly Mansour, the head of Egypt’s High Constitutional Court, as president on July 3.

In his paper, Foley compares the upheaval in Egypt to the Russian Revolution of 1917, which he noted was “a series of revolutions,” not just one.

“Given the Arab World and the globe’s political and socioeconomic dynamics, it is increasingly likely that the Arab Spring may also be viewed in the near future as the precursor to a far larger revolutionary event as significant as the one in Russia which ‘shook the world’ in 10 days in October 1917,” Foley wrote.

Foley’s paper is set to be published in the September 2013 issue of The Journal of Turkish Politics.