MTSU volunteer urges all to get coronavirus vaccin...

MTSU volunteer urges all to get coronavirus vaccine he, others tested 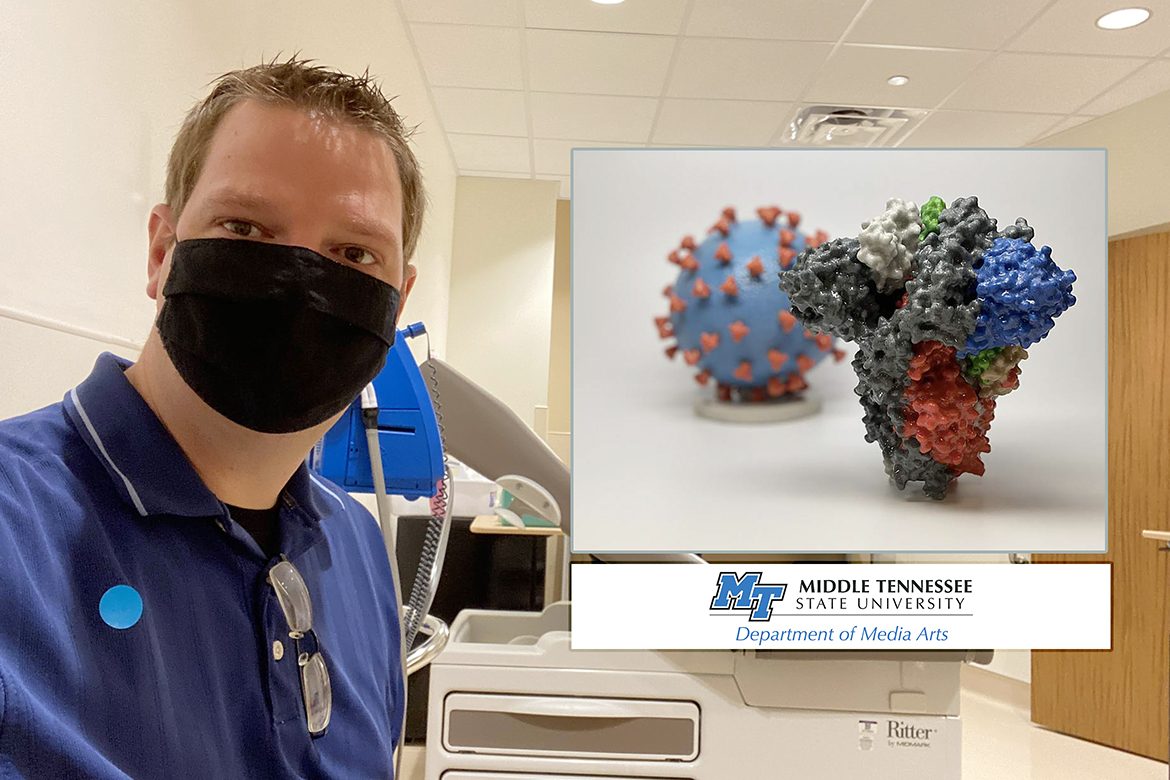 MTSU’s Mike Forbes is accustomed to working behind the scenes to help others shine.

Now he and 1,000 other Nashville-area volunteers who’ve been helping with a study for Moderna’s newly approved COVID-19 vaccine can say they’ve brightened the outlook for a lifesaving response to the pandemic.

Mike Forbes is assistant director for technical systems in MTSU’s Department of Media Arts in the College of Media and Entertainment — one of the go-to guys for the university’s live and recorded video productions.

He’s the mind, for example, behind the massive video display at special events like concerts and theater performances, giving his students hands-on experience to turn into entertainment-industry work in concerts, award shows, music videos, film and TV.

He also teaches courses in the university’s Video and Film Production Program.

“The industry was really looking good for the ’20-21 season, especially summer, and we had students who were geared to hit the road and go out and do tours, and it literally ground to a halt around the end of March,” he said.

“I know several people who were really heavily impacted by the pandemic, especially in the touring and entertainment world, being in Nashville, and so one of the things I thought of was how can I help this situation? How can I make a recovery happen faster?”

Forbes also saw reports of companies gearing up to develop coronavirus vaccines — and the video wall in his head lit up.

“I started doing research about the vaccines and really got fascinated by the science and how mRNA is developed,” said Forbes, a 2008 media graduate who returned in 2011 to help MTSU after working on the road with Brooks & Dunn.

He learned that the Massachusetts-based biotechnology company Moderna Inc. was conducting one of its vaccine studies at Vanderbilt University Medical Center in nearby Nashville.

He volunteered, telling them that although MTSU was working hard to protect its employees and students, “’I’m a good candidate because there’s a high probability that I could be exposed to COVID during the semester.”

“MTSU has done wonderful things when it comes to preventing exposure for staff and faculty, but there’s only so much physically that a university can do, so I knew it was coming at some point or another,” he said.

Forbes headed to Nashville for duty, where the researchers “scrub you and stab you from head to toe, basically checking every vital sign that you have, and see what changes over time.”

His first dose of Moderna’s mRNA vaccine — or a salt-water placebo injection; he doesn’t know yet, since it’s a double-blind study — was in mid-August, followed by the second a month later.

‘We need to do this for science’

“mRNA” is shorthand for “messenger RNA” in molecular biology. It’s a single-stranded nucleic acid in all living cells that, in its messenger form, carries genetic information to help DNA synthesize proteins.

Traditional vaccines, like the seasonal flu shot, use a dead virus to trigger the body’s invader-fighting immunity. The new mRNA vaccines pioneered by Moderna and its competitor Pfizer Inc., however, attach a piece of genetic code to the miniscule messenger that “teaches” the immune system to spring into action when it recognizes the spike proteins on the surface of the COVID-causing SARS-CoV-2 virus.

On Dec. 14, a New York City nurse was the first person in the United States to receive a COVID-19 vaccine, developed by Pfizer and its German partner. The U.S. Food and a Drug Administration granted an emergency authorization Dec. 18 for Moderna’s vaccine.

The company said after the FDA announcement that it will deliver 20 million doses to the U.S. government by Dec. 31. Another 85 million to 100 million will be available nationwide before the end of March.

Forbes had only a mild headache after his Moderna trial vaccinations.

Then his wife, a local teacher, got sick.

She got tested. It was positive for COVID-19.

The next day, Forbes started showing symptoms of the viral infection. He called the vaccine study center. 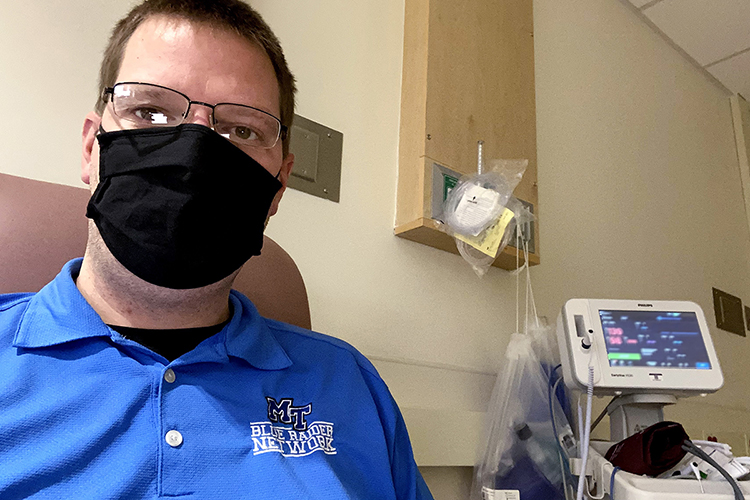 Mike Forbes, assistant director for technical systems in MTSU’s Department of Media Arts in the College of Media and Entertainment, snaps a selfie in a Vanderbilt University Medical Center exam room in early December while he waits to participate in Moderna Inc.’s COVID-19 vaccine trials. Forbes was one of 1,000 local volunteers to sign up for the double-blind study this summer and one of 95 out of 30,000 participants nationwide to contract the virus a few weeks later. He says if his experience played a part in getting out the vaccine sooner for others, “I’m okay with that.” (photo courtesy of Mike Forbes)

“They basically said, ‘We want you to come in. We know you’re sick; we know you feel terrible. But we need to do this for science. We need to get the data from you to be able to get the information to the FDA.’ So I did.”

In the meantime, he worked from home and taught his MTSU classes via Zoom. He couldn’t smell or taste anything, his oxygen levels weren’t ideal, and his heart rate rose as his body worked to repair itself.

But he still felt good about participating in the study. He later learned that he was one of only 95 Moderna study participants who contracted COVID-19 out of the 30,000 who joined the company’s U.S clinical trials.

Five of those 95 received the vaccine, the company said. The other 90 battled the virus with their saline-shot placebos and their non-immunized immune systems.

“The bottom line was, when I was sick, I said, yeah, this really sucks. It’s not fun getting COVID, but if me getting sick means that I can help get the vaccine out that much sooner for somebody else, then I’m okay with that,” Forbes said.

“It’s one of those things where we have to do something; we can’t just sit on the sidelines and wait for this stuff to happen; because they need volunteers. They need people to step up to the plate and say, ‘I’ll go in and help out. Put me in, coach; I’ll do whatever you need.’”

Forbes is back in good health. He finished out the fall semester strong and says he’s enjoying staying in touch via social media with his fellow study participants, who’ve also “donated their bodies to science” for 27 months to help others affected by the pandemic.

“I look at this as a stepping stone: we will get over COVID and we’ll get better as a country. We will return to normal, whatever that may be,” he said. “But this technology that they’ve used to develop a vaccine, the mRNA, it’s a game-changer for a lot of things.

“It’s not only going to fix COVID; it is going to be a major contributor to resolving many issues that we’ve never been able to replicate and fix, like HIV, the common cold, the flu — all these things are going to be something that we may be able to tackle now because we have our technology and research to back the science up.”

Dr. Moncef Slaoui, the chief adviser for the U.S. COVID-19 vaccine program, said Dec. 13 that he hopes to have 40 million doses of vaccine distributed — and 20 million Americans immunized — by the end of the year.

On that timetable, he said, 100 million people nationwide will be vaccinated by the first quarter of 2021.

As for the naysayers who argue about the vaccine, Forbes has some encouraging words. 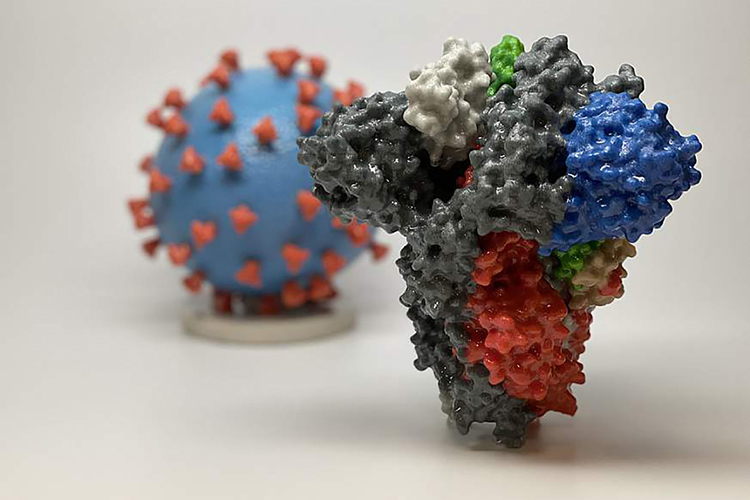 “The purpose of this, I am hoping, is to convince people to look at getting the vaccine. Somebody who normally would not feel comfortable with it might look at what I’ve said and say, ‘Here’s somebody who has similar religious views and ideas, and he’s comfortable with getting it.’

“They (researchers) are literally going point by point and they’re taking their time and effort, and that’s why it’s taken so long for this. … I really would encourage everybody to, when you have access to the vaccine, go get it, because this is what’s going to get us back to normal.”

And that includes the entertainment industry he wants to continue training students to enjoy as much as he did — and still does.

“There are so many people that I know in the entertainment industry that are unemployed, and I love the concert touring industry,” Forbes said.

“I love sending students on the road when they graduate from here, I love seeing students succeed, and I can’t promise them at this point that the industry is going to rebound anytime soon unless I’m willing to actually go out there and make a sacrifice and be part of the vaccine study.” 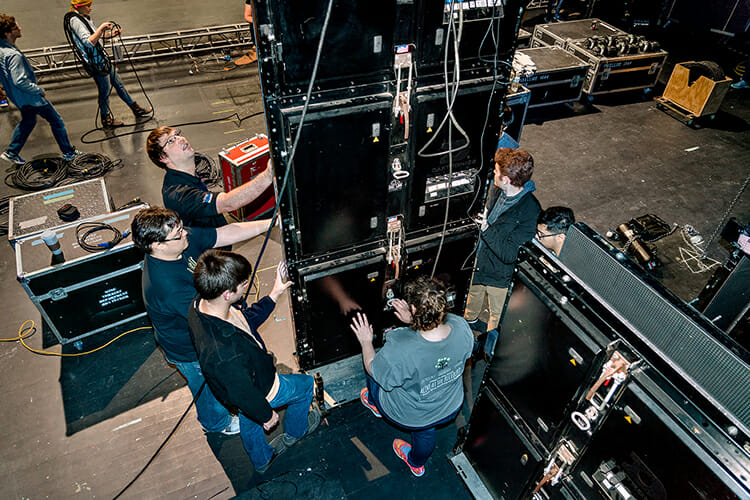 Mike Forbes, shown at center left looking up, works with students to install LED panels on the Tucker Theatre stage for the set of “Joseph and the Amazing Technicolor Dreamcoat” in this March 2018 file photo. Forbes, assistant director of technical systems for MTSU’s Department of Media Arts, volunteered for Moderna Inc.’s coronavirus vaccine clinical trials in Nashville this summer, caught COVID-19 in the fall and is healthy again and encouraging others to be immunized as soon as the vaccine is available. (MTSU file photo by J. Intintoli)