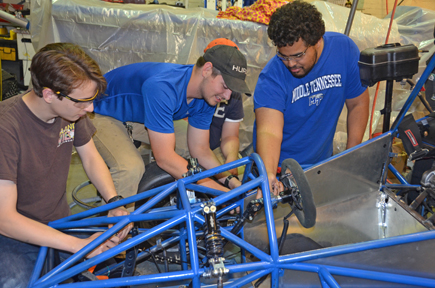 Seeking a third straight success story for the MTSU Experimental Vehicles Program, nine members of the Formula Hybrid team are in Loudon, New Hampshire, this week competing in the Society of Automotive Engineers, or SAE, Collegiate Design Series.

The April 27-30 Formula Hybrid competition is an interdisciplinary design and engineering challenge for undergraduate and graduate university students.

It’s all hands on deck for the MTSU Formula Hybrid team. Before leaving for Loudon, New Hampshire, for the April 27-30 competition, they made numerous adjustments to their vehicle. (MTSU photos by Randy Weiler)

They must collaborate to design and build a formula-style electric or plug-in hybrid racecar and compete in a series of events. This educational competition emphasizes drivetrain innovation and fuel efficiency in a high-performance application.

MTSU will be looking for a third straight strong performance in the past four weeks from its Experimental Vehicles Program entries.

On April 18, one engineering technology department lunar rover entry placed first in the U.S. and third against international competition at the NASA Human Exploration Rover Challenge in Huntsville, Alabama. MTSU placed in the top 30 universities at the Baja SAE Collegiate Design Series at Opelika, Alabama, near Auburn, April 9-12.

In what team captain Daniel Morgan of Battle Creek, Michigan, calls the “hardest competition of all the school events” the MTSU experimental vehicles enter — solar boat, lunar rover and Baja SAE regional and national events — Morgan said he feels “confident in the vehicle, but we know we have some things to fix.”

“We’ve got some fine-tuning to do,” added Morgan, a mechatronics engineering major and Michigan State graduate, on the eve of the team’s departure from MTSU for Loudon and the start of the competition at the New Hampshire Motor Speedway. The track is the home of NASCAR and IndyCar events and the Loudon Classic, the oldest motorcycle race in North America.

Captain Daniel Morgan inspects the batteries to be used in the MTSU team’s Formula Hybrid SAE (Society of Automotive Engineers) vehicle. They are competing against other universities at the New Hampshire Motor Raceway in Loudon, New Hampshire.

Including the driver, the MTSU open-air, single-seat Formula Hybrid vehicle weighs about 900 pounds. It features both combustion and an electrical engine. Last-minute circumstances forced the team to buy a 250cc Kawasaki motorcycle in order to transfer its combustion engine to deliver the hybrid aspect to the MTSU entry.

The 2014-15 team inherited the metal frame that was designed several years ago.

Morgan said a cool feature is running the brakes on the sprockets (a wheel with teeth that mesh with a chain or other material) — something he has seen on motorcycles, but never on a four-wheel vehicle like this.

Technical inspections highlighted most of the April 27 schedule. For more information, including the schedule and to follow the results, visit http://www.formula-hybrid.org/.

To learn more about the program and the various opportunities to work with the vehicles, call Foroudastan at 615-494-8786 or email Saeed.Foroudastan@mtsu.edu.

The MTSU Experimental Vehicles Program lunar rover team has regained its status as the best in the United States.

A 5-minute-plus finish April 18 on the U.S. Space and Rocket Center’s half-mile obstacle course in Huntsville, Alabama, propelled the MTSU rover, nicknamed “The Beast,” to a third-place finish behind Russia and runner-up Germany in the NASA Human Exploration Rover Challenge.

The event is held annually for university and high school teams to encourage research and development of new technology for future mission planning and crewed space missions to other worlds.

No. 1 in the United States and No. 3 in the world are A-OK with captain Beau Hallavant.

“It’s a breath of fresh air … the weight off our shoulders,” said Hallavant, a senior mechanical engineering technology major from Bell Buckle, Tennessee, recalling all the hard work and preparation leading to the two-day competition. “I don’t know that it’s sunk in yet.”

“I don’t have time to soak it up,” added Jeremy Posey, the engineering technology graduate student in charge of the entire Experimental Vehicles Program. “There’s too much to do. We have to leave Saturday (April 26) for the Formula Hybrid competition.”

The MTSU Formula Hybrid team will make the 22-hour journey to Loudon, New Hampshire, where the event will be held at the New Hampshire Motor Speedway.

All involved point to the drivers, Zack Hill of Hendersonville, Tennessee, and Nichole Wanamaker of Clarksville, Tennessee, and the team’s depth and experience as the reasons for MTSU’s high finish — the same as 2013 — after placing fourth in the United States and fifth overall in 2014.

“We’ve never had drivers with that much heart, and that made all the difference,” Hallavant said.

Posey added that the drivers “didn’t give up. They pushed all the way to the end.

“Everyone jumps right in,” he said of the team. “We have so many now so willing to do the work. As leaders, we can step back, and all we have to do is direct the workflow.”

College of Basic and Applied Sciences Dean Bud Fischer said he was extremely proud of the team.

“The students who worked on this project have demonstrated the same innovation and ambitious spirit that put the first Apollo-era lunar rover on the moon four decades ago,” Fischer said.

“These types of hands-on experiences, which allow students to apply what they’ve learned in the classroom to applied problems, are what make the College of Basic and Applied Sciences at MTSU the place to be for STEM (science, technology, engineering and math).”

The design of “The Beast,” which was built for the 2014 competition and modified this year, is “the best design MTSU has ever come up with and one of the best NASA’s ever seen,” Posey said.

MTSU’s second entry, nicknamed “The Model-A,” placed 19th with a best time of 9:17 April 18. Hallavant said the course was tougher this year. Russia’s winning time of 4:22 was 13 seconds slower than the 2014 winner, the University of Puerto Rico Humacao Team 2.

MTSU team members said they were glad they finished ahead of their in-state rival, fourth-place Tennessee Tech. LSU placed fifth.

Sitting in the front seat of the MTSU lunar rover nicknamed “The Beast,” Provost Brad Bartel is shown with team members and Department of Engineering Technology faculty, staff and administrators April 15 outside the Tom H. Jackson Building. The lunar rover is one of four Experimental Vehicles Program projects students participate in during the year.