The Legacy of Dwight’s Mini Ma..

The Forrest Hall controversy will be explored in detail in a videoconference and panel discussion with an author who has written about it in a new book.

Connor Towne O’Neill, author of “Down Along with That Devil’s Bones: A Reckoning with Monuments, Memory, and the Legacy of White Supremacy,” will speak in a virtual book talk scheduled for 5 p.m. Wednesday, Oct. 14. The event is sponsored by MTSU’s Albert Gore Research Center. 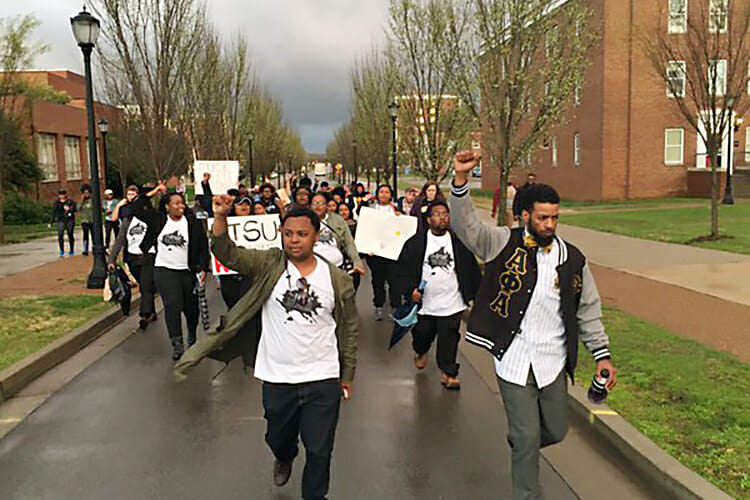 Louis Kyriakoudes, director of the Gore Center, will moderate a panel discussion with O’Neill, Gore Center political and regional collections archivist Sarah Calise, and Joshua Crutchfield, one of the student activists who protested for changing the name of Forrest Hall in 2017. Crutchfield is now a doctoral student at the University of Texas at Austin. To register for the event, go to https://bit.ly/MonumentsTalk.

An instructor in the Department of English at Auburn University in Auburn, Alabama, O’Neill said in a recent interview that he began looking for civil rights initiatives after the June 17, 2015, murders of nine African-Americans in a church in Charleston, South Carolina, by a 21-year-old white supremacist who posted Confederate symbols on his website.

“I was interested in following stories of campaigns about monuments of Nathan Bedford Forrest specifically,” O’Neill said in a recent interview. “As I was looking across the South for campaigns … (I chose) stories that had protests happening in the moment.”

Nathan Bedford Forrest was a Confederate general during the Civil War and one of the founders of the Ku Klux Klan. His name has adorned MTSU’s Reserve Officers’ Training Corps building since 1958.

The university disposed of much of the other iconography surrounding Forrest and the Confederacy in 1978, but protests calling for the removal of his name from the ROTC building have cropped up periodically over the years.

The second section of O’Neill’s book is titled “Forrest in the Age of Confederate Reproduction—Murfreesboro.” It examines MTSU’s decades-long history of Rebel symbolism and efforts to remove it.

“He took the time to interview supporters of the Forrest monuments and provides us something of a lens in which these white supremacist symbols play a role in the construction of their own identity,” Kyriakoudes said.

Featuring comments from participants on all sides of the issue, O’Neill chronicles events up to and including the most recent 2017 attempt by student activists to get Forrest’s name removed from the ROTC building. 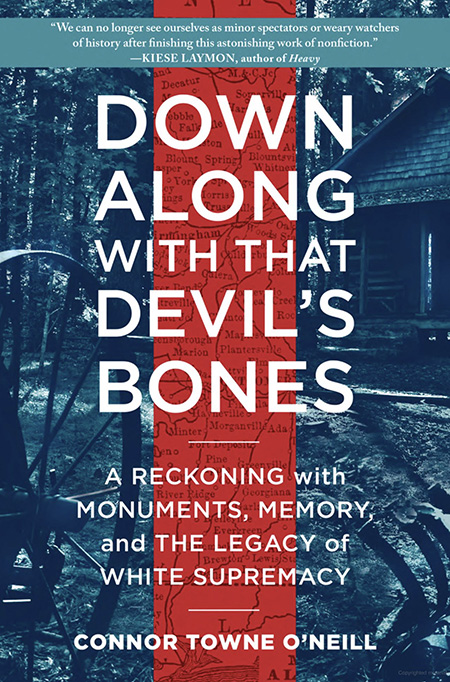 “Down Along with That Devil’s Bones: A Reckoning with Monuments, Memory, and the Legacy of White Supremacy” includes a section about the controversy surrounding the name of MTSU’s Forrest Hall.

In February 2018, the Tennessee Historical Commission rejected MTSU’s request to change the name in line with the recommendation of a task force formed by President Sidney A. McPhee to address the issue.

“O’Neill does a great job interrogating whiteness and its power to shape our collective memory,” Calise said.

“Down Along with That Devil’s Bones” also features historic struggles with Forrest’s legacy and Confederate imagery in Selma, Alabama; Nashville, Tennessee; and Memphis, Tennessee.

“The book really digs into how white people across the South intentionally installed monuments like MTSU’s Forrest Hall in order to control historical narratives and intimidate black people,” Calise said.

O’Neill is also a producer of the National Public Radio podcast “White Lies” and has written for Vulture, Slate, RBMA, the Village Voice and New York magazine. 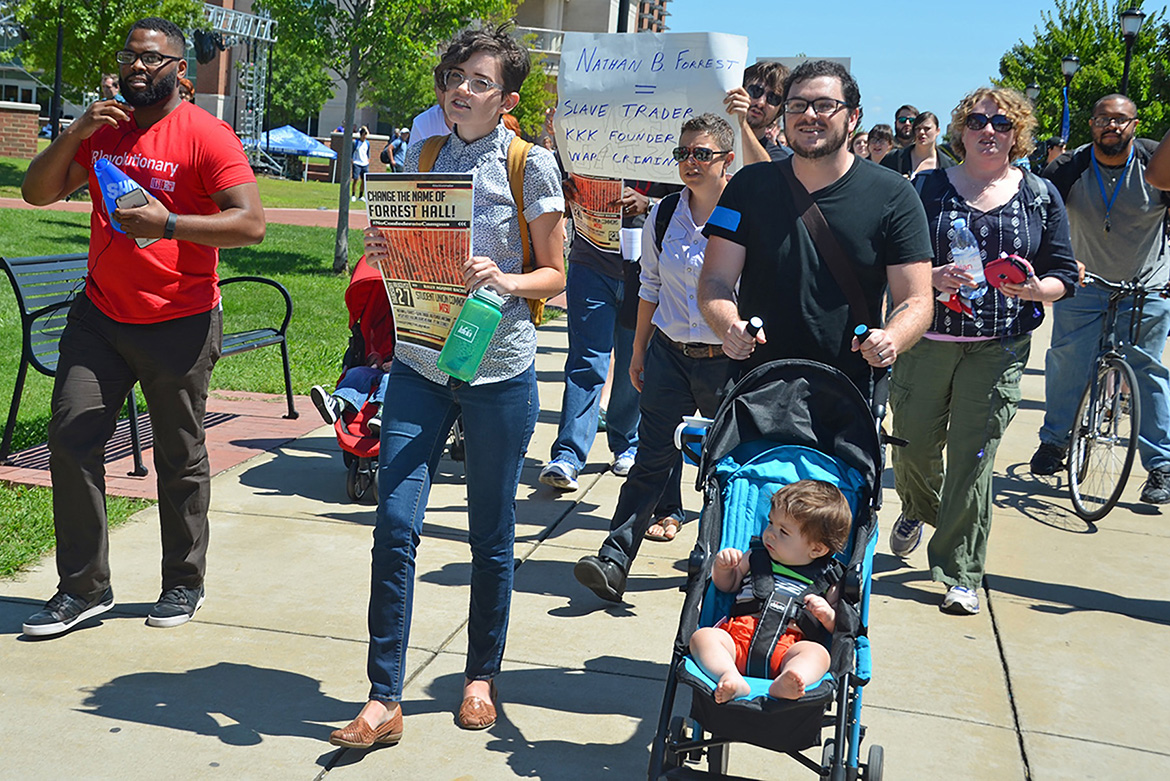 In this August 2015 file photo, MTSU students, alumni and others wanting to change the name of Forrest Hall walk in an organized protest from the Student Union Commons to the building that houses the military science program. Forrest Hall is named for Confederate Gen. Nathan Bedford Forrest. (MTSU photo by Randy Weiler)