NASHVILLE, Tenn. — MTSU students are unearthing an important chapter in Nashville history and American history, one small plot at a time.

Actually, Andrew Wyatt, an associate professor of archaeology in the Department of Sociology and Anthropology, started the Bass Street Community Archaeology Project, named for an important nearby thoroughfare in the African American community, in 2017.

Since then, he and his students have spent time digging at Fort Negley Park, which became the site of one of the first post-Civil War black neighborhoods in Nashville. 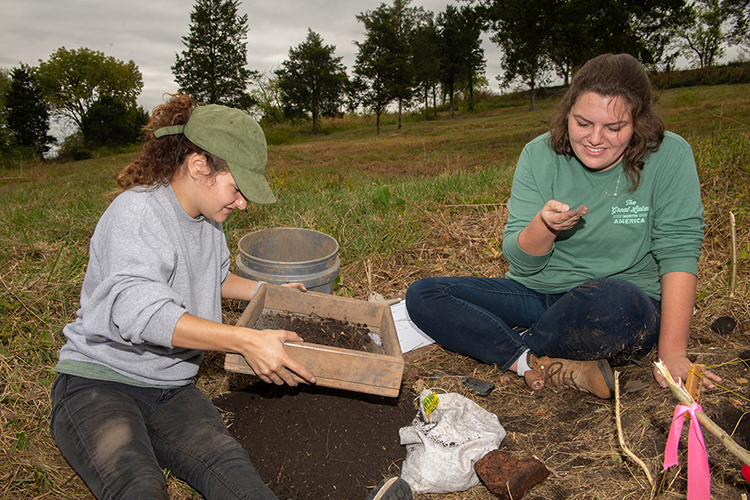 What is as stunning as the history itself is the fact that many of the students in the Archaeology 3210 class aren’t majors in the discipline and have had no previous experience on archaeological digs.

Helping Wyatt guide the neophytes are two young veterans of the professional process.

“Getting that practical experience, I think, is a key thing as part of the class, because you don’t really know what archaeology is like until you start doing field work,” Peacock said.

“Anything that we can take points for, I can show on a map and be able to geospatially analyze it next to historic maps,” Clelie Peacock said.

Madeleine Laderoute is a graduate teaching assistant who helps Wyatt teach the class, assists in the lab and works with students to excavate 50-by-50-centimeter units inside Fort Negley Park. Students screen all the dirt they excavate for the smallest artifacts.

Laderoute said the historical significance of the dig is substantial.

“There is not a lot of archaeology of African Americans in the South post-emancipation,” Laderoute said. “For that reason, this site is unique in that this is one of the first free black communities in the city of Nashville.” 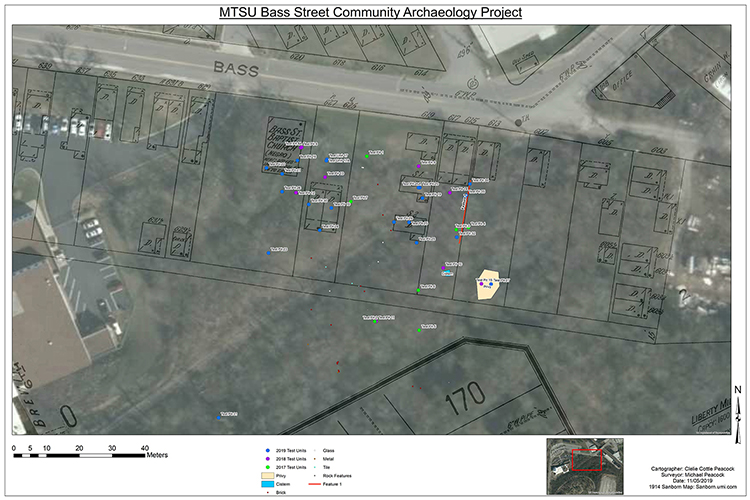 More than 500 escaped slaves built Fort Negley on what was then Union-occupied territory in a Confederate state. After the war, the African Americans created one of Nashville’s earliest free black neighborhoods there.

“The stone foundation of the church is still there,” Wyatt said. “We also have a foundation for one of the houses that we can see and we have dug around.”

In the 1930s, the federal government took over the land to rebuild the fort, which had fallen into disrepair, and to create a park. That means what’s recovered on the site can encompass several different time spans.

Wyatt said some of the artifacts include square-cut nails, which were manufactured individually and used to build houses until the early 1800s, as well as bottles from the 1940s and mismatched ceramics, indicative of people who couldn’t afford complete sets of china. 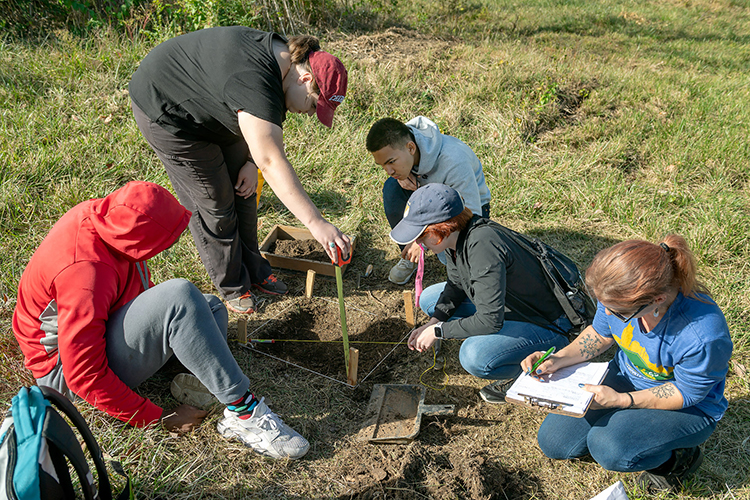 MTSU students measure an archaeology unit and document their work during an Oct. 19, 2019, dig at the Bass Street Community Archaeology Project in Nashville. From left are Julius King, Autumn Lovell, Lar May, Olivia Thompson and Kathryn Miller. (MTSU photo by James Cessna)

The students will suspend their digging for the spring 2020 semester while Wyatt teaches other classes. Peacock and Laderoute said the break will be beneficial, however, because it will give them a chance to get caught up with mapping and with cataloguing artifacts uncovered so far.

“This is an opportunity to teach students about archaeology, not just how to do it, but what it means,” Wyatt said. “This is an historically significant site. They’re learning, hands-on, an important part of Nashville history.”

Some of the artifacts ultimately will be displayed in the Fort Negley visitors’ center, but the project will continue for the foreseeable future; students will resume their excavations in the fall 2020 semester.

For more information about MTSU’s archaeology classes, go to www.mtsu.edu/programs/anthropology. To learn more about the Bass Street Community Archaeology Project at Fort Negley, contact Wyatt at 615-904-8487 or andrew.wyatt@mtsu.edu. 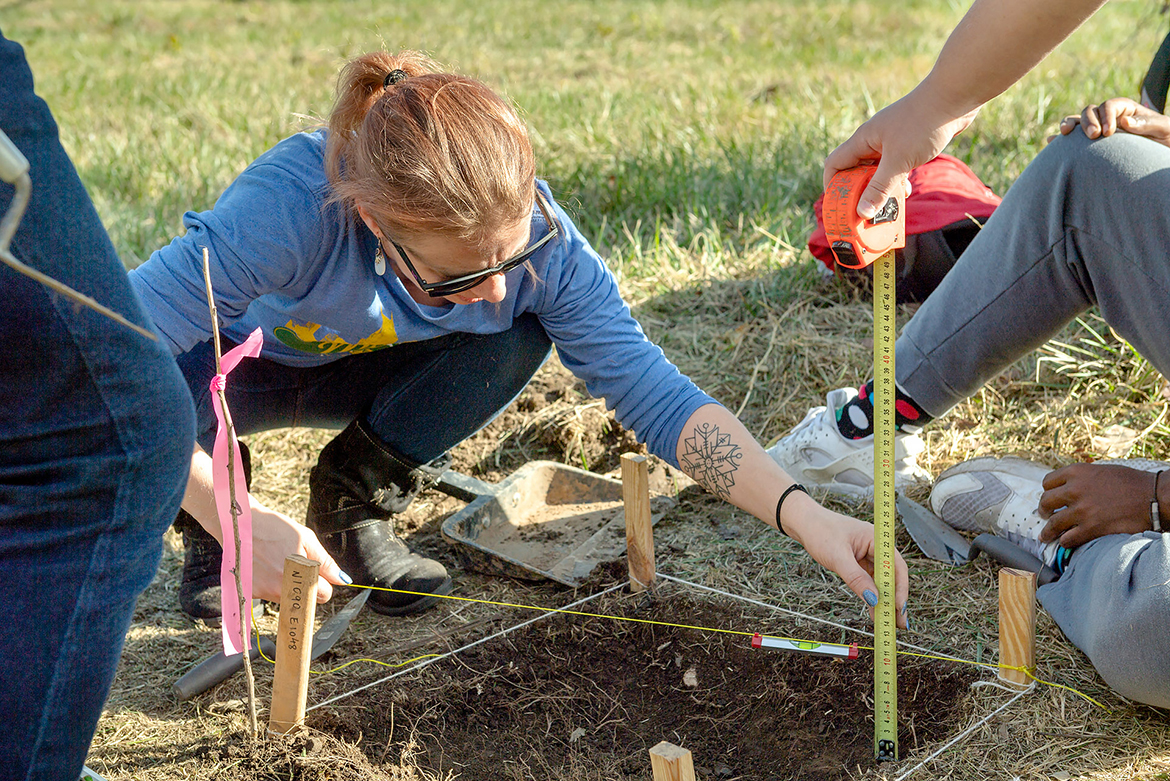 MTSU student Kathryn Miller measures the depth of an archaeology unit during an Oct. 19, 2019, dig at the Bass Street Community Archaeology Project in Nashville, Tenn. The site represents one of the first post-Civil War black neighborhoods in Nashville. (MTSU photo by James Cessna) 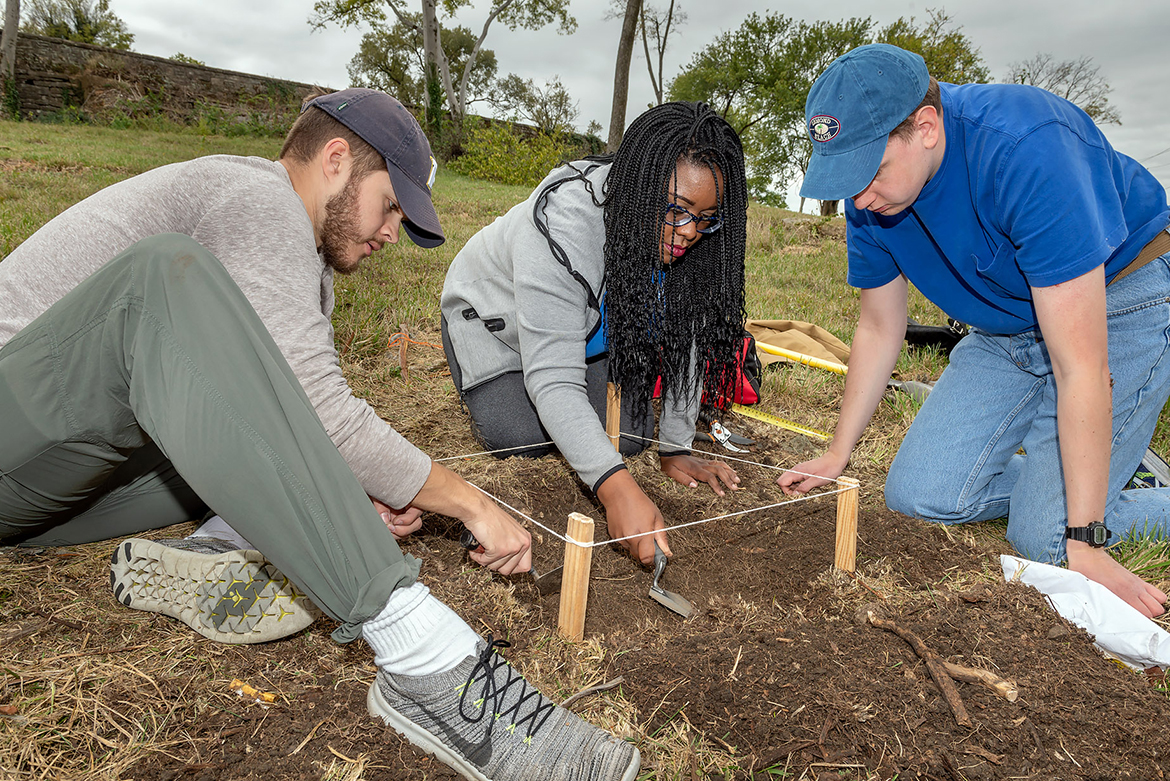 MTSU students work in one of the archaeological units during an Oct. 19, 2019, dig at the Bass Street Community Archaeology Project in Nashville. From left are Joshua Shell, Jasmine Elliott and Noah Seifert. (MTSU photo by James Cessna)