An MTSU School of Music professor’s new CD release, featuring university colleagues performing poetry set to his compositions, is earning recognition from some of the industry’s most prestigious media. 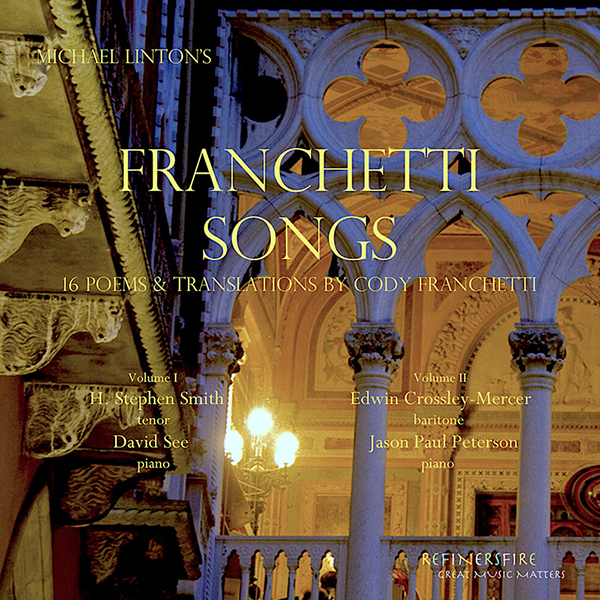 Click on the image to see a larger version.

A preview of the Smith-See performances, which includes the poetry translations and sheet music, is available above.

The Metropolitan Opera Guild’s magazine, Opera News, said in a recent edition that the “Franchetti Songs” collection is “not to be missed.”

He had similar praise for the second volume, noting Crossley-Mercer’s “regally beautiful and sonorous voice … expertly accompanied by pianist … Peterson.”

“We now dream of hearing works composed by Michael Linton for still other voices, and even — but the necessary financial means would obviously be more important — for several instruments, even for orchestra,” critic Laurent Bury wrote in his summer 2019 review.

Linton, a Bach scholar who teaches music theory and composition, first heard about Franchetti while working with a financial analysis podcast, then visited his website and read his translation of a poem by Edwardian-era Italian writer Dino Campana.

The MTSU professor was working at the time on setting another Italian poet’s work to music — Catullus, a contemporary of Julius Caesar’s — that became his first song cycle, “Carmina Catulli.”

Linton asked Franchetti if he could set the modern Campana translation to music, then asked for other poetry. Franchetti complied with original works, and their collaboration clicked, leading to the Franchetti Songs collection.

“A poet’s poem is a finished thing, complete in and of itself; a musician cannot ‘enhance’ it, he can only make it something different from what left the poet’s hand,” Linton wrote of their partnership.

“Setting the words of dead poets is a bit like grave robbing; the deceased cannot defend his property, and you’re free to loot at will. But using the poetry of a living poet is a very different matter, and allowing a composer to set your work — even when the right to do so is purchased — is an extraordinary act of artistic generosity.”

“Franchetti Songs” is Linton’s third release of song cycles; the inaugural Catullus CD was followed in 2018 by “Wilde Songs,” a collection of the legendary writer Oscar Wilde’s poetry.

The professor also has two more CDs in the works: a collection of solo soprano performances focusing on texts about separation and a CD of instrumental chamber music.

The “Franchetti Songs” CD package is available, along with more of Linton’s work and that of several of his MTSU School of Music colleagues, from the record label he co-founded, Refinersfire. The website is http://refinersfiremusic.com.

For more information about MTSU’s School of Music in the College of Liberal Arts, visit www.mtsumusic.com.