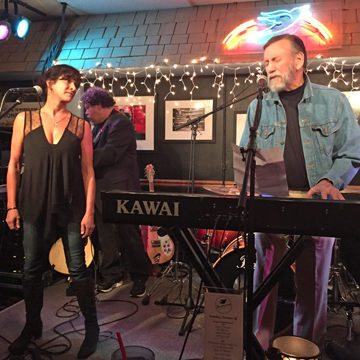 NASHVILLE, Tenn. — “Freedom Sings” celebrated its 16th anniversary at The Bluebird Cafe Tuesday night with songs of “truth, justice and equality” in honor of a legendary journalist who devoted his entire career to protecting the First Amendment.

That man was John Seigenthaler.

Seigenthaler, a leading advocate of free speech and long-time editor of The Tennessean, died July 11, 2014, after a successful career defending social justice, human rights and racial equality. All of the songs performed at the world-famous nightclub reflected both his life and his values.

Watch a video excerpt from the tribute below.

Ken Paulson, president of the First Amendment Center and dean of the College of Mass Communication at Middle Tennessee State University, said he created “Freedom Sings” with intentions of a one-time show.

“John understood well that the First Amendment was not just about freedom of the press,” Paulson said offstage. “It projects all freedoms of expression, including art and music.”

The show kicked off in stirring fashion with Nashville singer-songwriting legend Ray Stevens performing his Grammy-winning best-seller “Everything Is Beautiful” as a duet with his singer-songwriter daughter Suzi Ragsdale, who was just a little girl when she sang with him on the original hit.

Country artist Hugh Moffatt performed Bob Dylan’s “The Times They Are A Changin,” a song that represents the kind of change Seigenthaler spent years fighting for, including getting clubbed by a KKK member while coming to the aid of a Freedom Rider in the early 1960s in Alabama.

“It’s hard to exaggerate the courage it took to take these kind of stands at the time in a non-violent way,” Moffatt said offstage of Seigenthaler. “It takes courage to stand against something, but taking a stand in a non-violent way like John did represents another level of courage.”

Suzi Ragsdale joins her father, Ray Stevens, in singing his hit “Everything is Beautiful” at The Bluebird Cafe Tuesday, Oct. 28, as part of Freedom Sings. (MTSU photo by Andrew Oppmann)

“He was at the front of everything,” Henry said offstage. “It’s funny to think that years later, I would be working with a man that inspired me when I was a kid. So to be here tonight, and sing songs for him, it’s going to feel … well, it’s going to feel like he’s here.”

Henry, along with singer-songwriters Kim Richey and Bill Lloyd, returned to the stage to perform the Pete Seeger classic “Where Have All The Flowers Gone,” a song the trio performed at the first “Freedom Sings” show, which Seigenthaler attended.

“I remember him immediately coming up to me after the show,” Henry recalled. “He gave me a big hug like he knew me for years. That’s how charming he was.”

The evening concluded with “Turn, Turn, Turn,” led by Bill Lloyd. The song, a favorite of Seigenthaler’s, was performed at his funeral service at The Cathedral of the Incarnation.