An MTSU professor’s special performance of French music for brass instruments, accompanied by two colleagues on piano, will kick off the MTSU School of Music‘s 2019-20 concert season Sunday, Sept. 15. 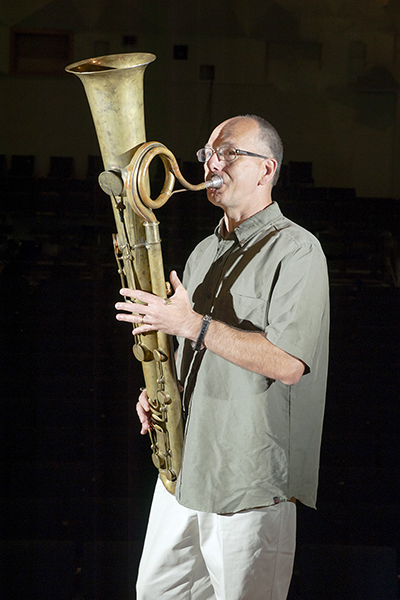 MTSU School of Music professor David Loucky plays a tune on a 19th-century ophicleide, the predecessor of the tuba and euphonium, in this MTSU file photo. Loucky will present a free public concert Sunday, Sept. 15, in Hinton Hall inside the university’s Wright Music Building that features French music for brass instruments, including his customary trombone and euphonium. (MTSU file photo by J. Intintoli)

The free concert by David Loucky, professor of trombone and euphonium, is set for 7 p.m. Sept. 15 in Hinton Hall inside MTSU’s Wright Music Building, located at 1439 Faulkinberry Drive in Murfreesboro.

He plans to perform on tenor trombone, bass trombone and euphonium, and in keeping with French trombone traditions, will begin on a small-bore tenor instrument.

The concert will commence with Jean-Michel Defaye’s “Deux Danses,” showcasing the composer’s love of American jazz, particularly the swing-era, trombone-focused work of artists like Tommy Dorsey.

“Crepuscule (Twilight)” by composer Gabriel Parès will be next, followed by two bass trombone selections, “New Orleans” by Eugène Bozza and “Fantaisie Concertante” by Jacques Castérède.

The concert will conclude with two arrangements for the euphonium: “Sérénade” by Camille Saint-Saëns and “Méditation” by Jules Massenet.

Loucky, a professor at MTSU since 1989, performed for two seasons as assistant principal trombonist with the St. Louis Symphony and has toured six European countries and four states and performed six times in Carnegie Hall with the organization. His continuing work with the Nashville Symphony includes performing in the orchestra’s Carnegie Hall debut in 2000.

He’s also an active performer with the New Hampshire Music Festival, the Huntsville Symphony, the Nashville Chamber Brass and the Middle Tennessee Jazz Orchestra, along with MTSU’s Faculty Jazz Combo, Faculty Brass Quintet and the Stones River Chamber Players, and has performed and lectured at international trombone festivals and tuba-euphonium conferences and serves on the MTSU-based Tennessee Governor’s School for the Arts faculty.

Richard Blumenthal, a new staff pianist for the School of Music, works with instrumental students and faculty for degree recitals and performances and helps with the university’s fast-growing musical theatre minor program.

He’s also a member of the Stones River Chamber Players, served as staff pianist for the 2019 International Tuba and Euphonium Conference and helps with Governor’s School for the Arts rehearsals and performances.

Allison Blumenthal, an adjunct School of Music faculty member, has taught at the private Murfreesboro Academy of Music and the Murfreesboro City Schools.

She also provides piano accompaniment for students at the annual Governor’s School for the Arts as well as local musical theater productions, choral rehearsals and concerts, competitions, auditions and recording sessions.