For years known locally as “Bridge Over Broad,” Murfreesboro’s multimillion-dollar urban interchange took on a distinctly MTSU flavor when it officially became Blue Raider Bridge on Thursday, Sept. 5, during a dedication ceremony attended by university, city, county and state officials, and community supporters.

“Today, we reunite to celebrate a relatively new structure, this amazing bridge over Broad Street, and to confer upon it a name that further cements the strong and vibrant ‘town-and-gown’ relationship that MTSU enjoys with the county of Rutherford and the city of Murfreesboro,” MTSU President Sidney A. McPhee told the crowd gathered on the northeast corner of the interchange in the city-owned lot next to Wilson Bank & Trust, which provided parking and refreshments to attendees. 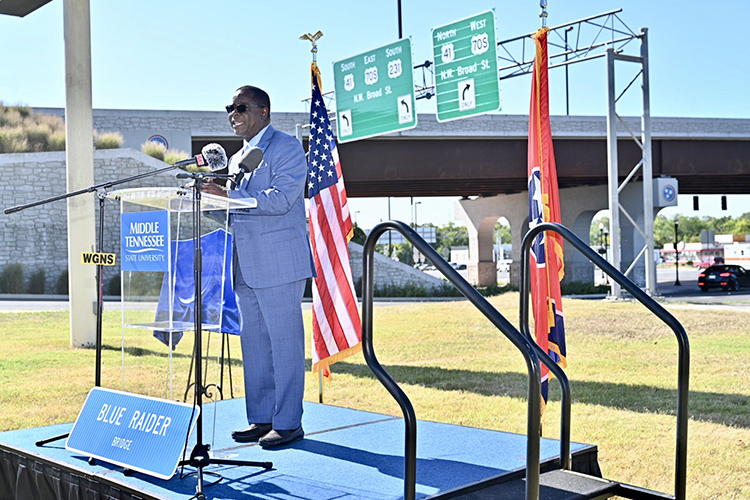 MTSU President Sidney A. McPhee praises the “town-and-gown” partnership between the university and community at the Thursday, Sept. 5, dedication ceremony of the newly named Blue Raider Bridge, shown in the background. (MTSU photo by J. Intintoli)

The $22.8 million Tennessee Department of Transportation project was needed to relieve extreme congestion at the intersection of Northwest Broad Street and Memorial Boulevard/Old Fort Parkway, one of the busiest in the state with an expected average daily traffic count of over 72,700 cars by 2034. Construction began in January 2014, and the full bridge opened in mid-March 2018 with full signalization for all traffic lanes.

Rutherford County Mayor Bill Ketron, an MTSU alumnus, pushed to name the bridge to honor MTSU because of the university’s community impact and because the bridge is one of the gateways to reach the Blue Raider campus. The Rutherford County Commission voted in December 2018 to ask the Tennessee General Assembly to approve the new name, which was OK’d earlier this year.

Ketron said naming the bridge in honor of the university only made sense — “Where would Rutherford County be if MTSU did not exist?” he asked — and announced a private fundraising drive to have blue LED accent lighting installed on the bridge to further emphasize the special nature of this new gateway toward the campus.

“It will be an iconic image for Murfreesboro,” he said. 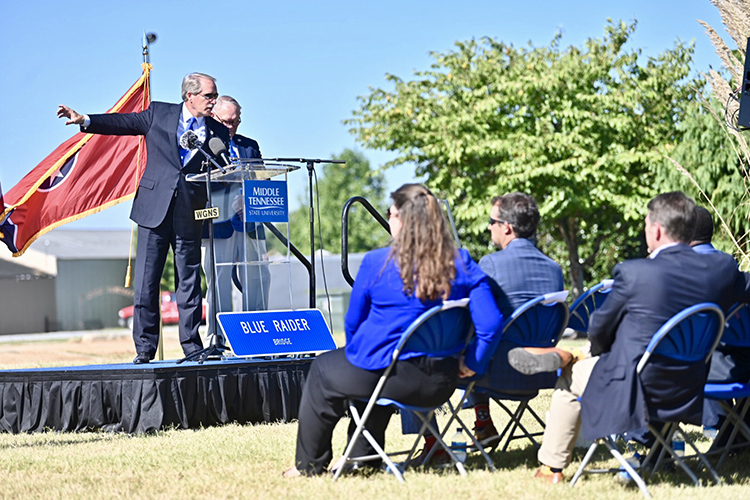 Rutherford County Mayor Bill Ketron, an MTSU alumnus, touts the partnership between MTSU and the community at the Thursday, Sept. 5, dedication ceremony of the newly named Blue Raider Bridge. Behind him is fellow MTSU alumnus and Rutherford County Commissioner Pettus Read, who also spoke at the event. (MTSU photo by J. Intintoli)

Rutherford County Commissioner Pettus Read, another MTSU alumnus, introduced the name change as chairman of the commission’s steering committee. He shared with the audience the deep MTSU roots within his family, stretching back to the university’s founding days when it was known as Middle Tennessee State Normal School, a training ground for teachers, to its present status as a comprehensive university now attended by his grandchildren.

“That name that you see here on this bridge is not just the name of an athletic team; it’s those of us who have graduated from there. It’s who we are and what we are. We’re a family, a Blue Raider family,” he said, sporting an MTSU tie and Blue Raider cap.

But he turned more serious in praising TDOT, Bell & Associates Construction and the Murfreesboro Transportation Department for their work overseeing the long-awaited project, which he said has not only greatly improved traffic flow but also includes infrastructure upgrades such as underground utilities, curbs and gutters, stamped concrete and pedestrian islands and signaling.

“I think everyone agrees that the finished product is a successful addition to traffic enhancement in our city and fitting of the Blue Raider name,” he said, also praising Murfreesboro City Council support for the project and the groundwork of past officials like former Mayor Tommy Bragg. 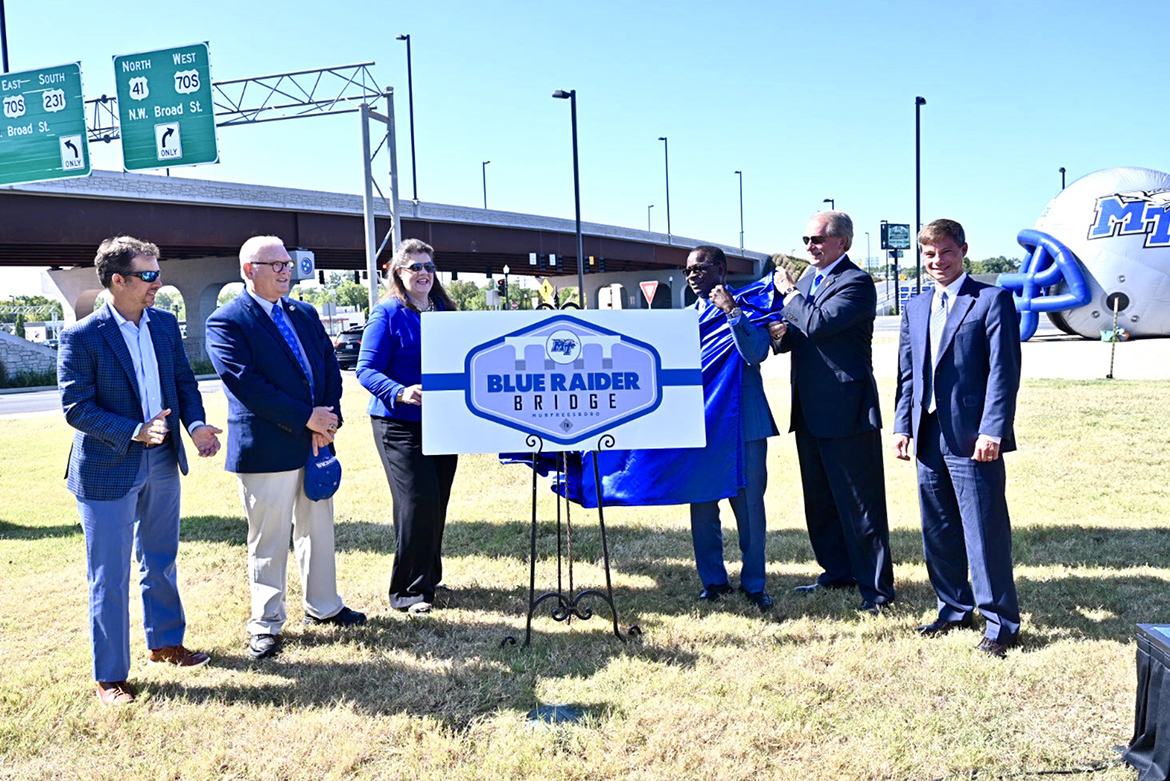 Representing the state were state Sen. Dawn White, an MTSU alumna, and state Rep. Charlie Baum, an MTSU economics professor. White was effusive in her praise of “the wonderful MTSU faculty and staff” in helping her and “thousands of students” earn degrees at the university, while Baum pointed to the university’s wider economic and quality of life impact on the community.

“Members of Rutherford County actively cheer Blue Raider sports all year round, and MTSU generates $1.1 billion in economic activity. I am pleased to report the Tennessee General Assembly happily endorses the naming of this bridge.”

The dedication comes a month after a similar dedication of long-awaited upgrades to Middle Tennessee Boulevard next to the Blue Raider campus.

“Also like Middle Tennessee Boulevard, this was a project that was transformational in nature” McPhee said. “Not only does it provide an elegant solution to what was a perplexing traffic problem, it creates a more inviting portal for residents and visitors to our downtown area and our campus.” 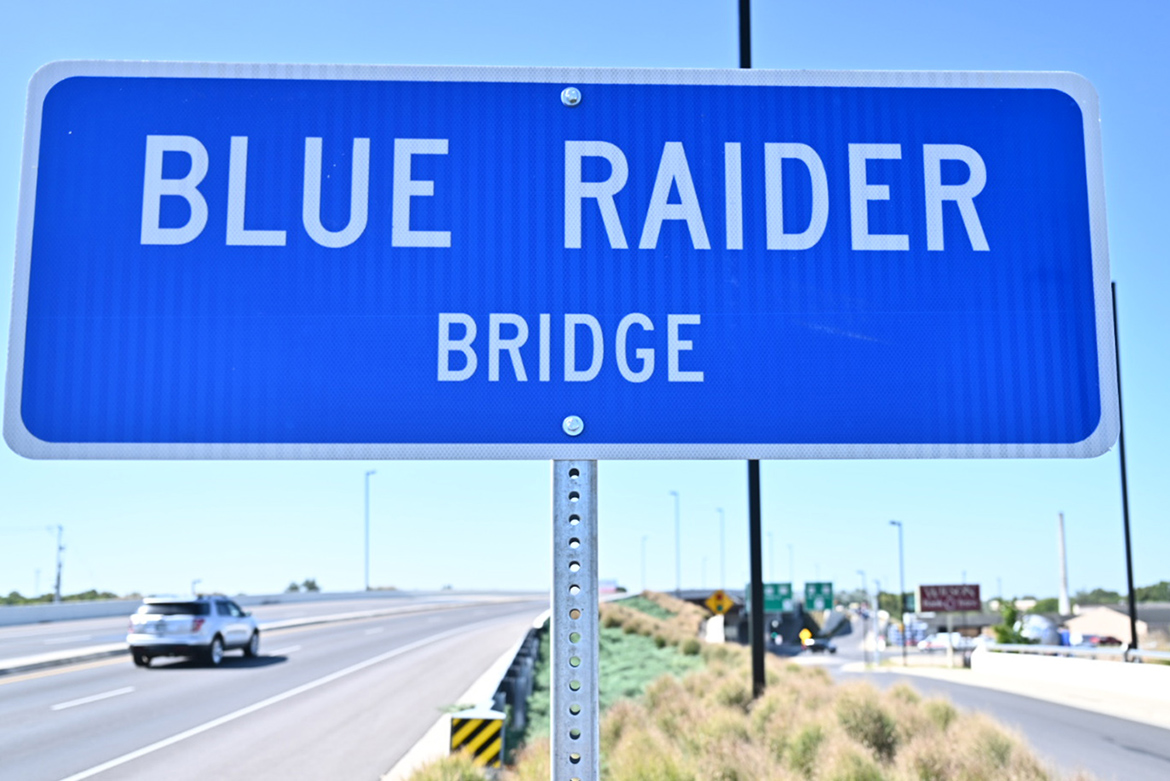 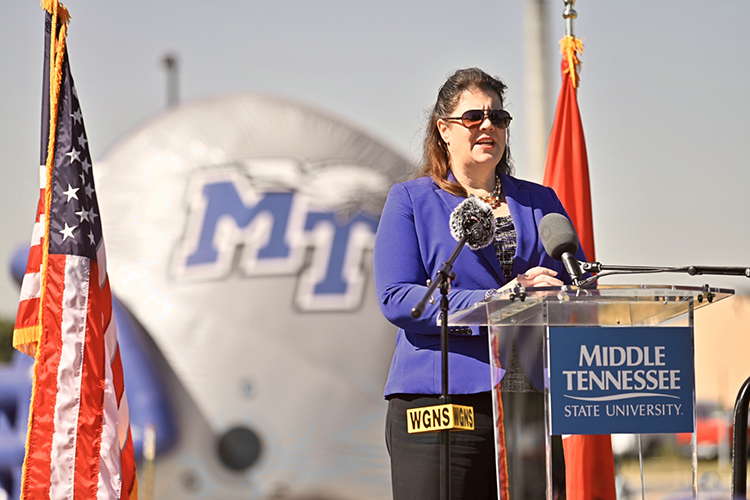 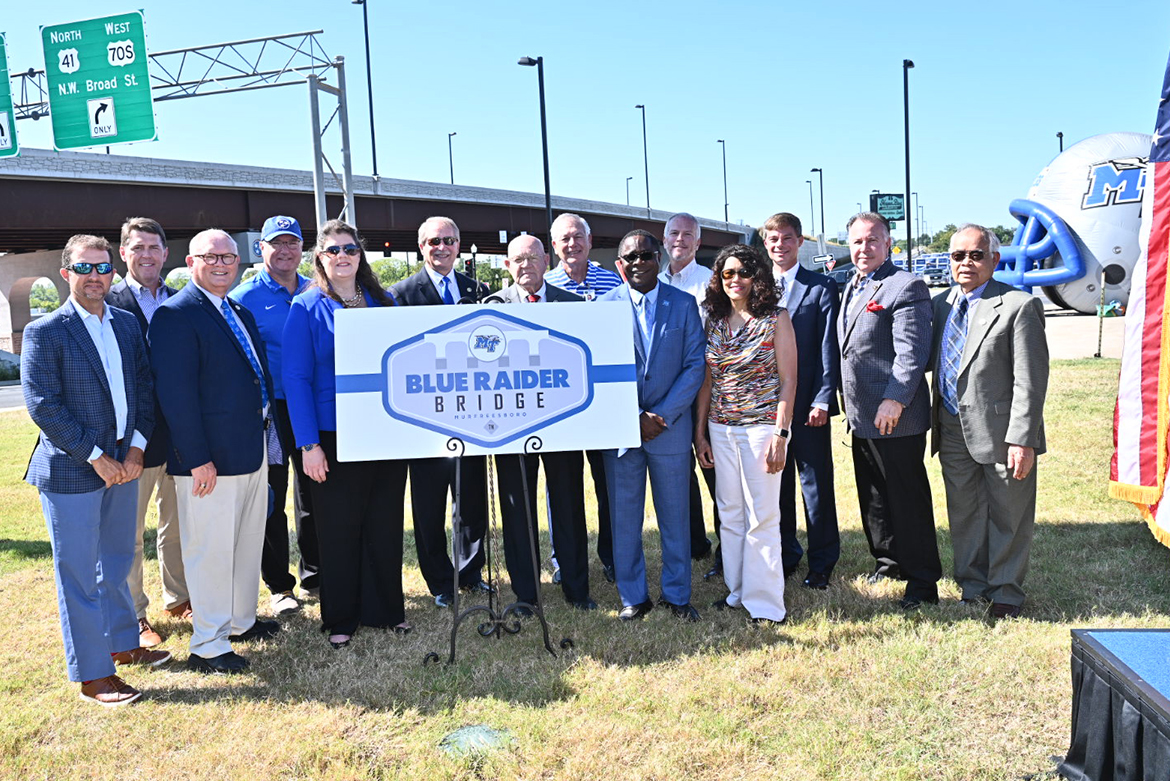 A host of MTSU, Murfreesboro, Rutherford County and state officials stand with a commemorative sign at the Thursday, Sept. 5, dedication ceremony of the newly named Blue Raider Bridge, shown in the background. (MTSU photo by J. Intintoli)