Power of sisterhood is focus o.. 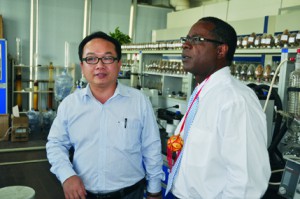 Looking West: MTSU President Sidney A. McPhee visits with Dr. Yuan in the extraction lab on the campus of the Guangxi Botanical Garden of Medicinal Plants in Nanning, China.

Middle Tennessee State University’s academic connections to the Middle Kingdom rival those of any university in America. But it is MTSU’s latest collaboration with the Chinese that may hold the greatest potential to yield significant dividends for Tennessee’s economy—and cure some of the world’s worst illnesses at the same time.

In his ongoing efforts to internationalize MTSU, President Sidney A. McPhee has been forging relationships in China for more than a decade. Over that span, McPhee has gained the trust of many powerful Chinese officials. They include the vice governor of the large province of Guangxi (pronounced Gwan-Chee) and leaders of a unique enterprise located there, the Guangxi Botanical Garden of Medicinal Plants (GBGMP). In its beautifully manicured gardens, GBGMP grows every plant that has ever been used in the healing art of Traditional Chinese Medicine (TCM). And now, as a result of a new collaboration forged by McPhee, MTSU has gained exclusive access to the GBGMP library of extracts, creating the opportunity to develop new Western medicines based on TCM’s proven healing powers.

To date, the state’s reaction to MTSU’s newest partnership bodes well for the university. When McPhee presented his handiwork to Gov. Bill Haslam recently, he got the governor’s endorsement for the creation of the Tennessee Center for Botanical Medicine Research at MTSU, where the screening of these TCM extracts will take place. Once Haslam signed off on the project, the Center received approval from the Tennessee Board of Regents (TBR).

“One thing I know very well from my years of intellectual property development is a good idea when I see one,” says Altman, who is conducting MTSU’s newest research project in concert with Quangchi native and MTSU research assistant professor Iris Gao, a key liason in the project. “This could be an unbelievable opportunity.”

The partnership also represents a perfect marriage of institutions with different strengths. GBGMP has identified and grown 500 plants or herbs that have been shown to have the potential to treat a variety of diseases via TCM. The 2,500 extracts that have been prepared represents a library of 50,000 to 250,000 individual compounds. MTSU, meanwhile, is expert in screening extracts to identify those that show promise for the treatment of cancer, AIDS or other important diseases. 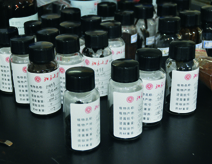 Several recent pharmaceutical successes stemming from the use of active chemical ingredients in Chinese herbal medicines to develop conventional Western pharmaceutical agents reveal just how big a deal MTSU’s new partnership may be. The two most prominent examples are Taxol (Paclitaxel), isolated from Taxus brevifola (the yew tree) and used to treat various cancers, and Artemisinia, isolated from Artemisia apiacea (a herb called sweet wormwood) and used to treat malaria. (It has already saved millions of lives.)

David Windley, industry analyst for Jefferies in Nashville, says the major pharmaceutical companies are always looking for the next drug, and that these success stories stemming from TCM are in fact changing attitudes.

“The proprietary pharma industry in the United States would certainly view anything that’s patentable and provable as an opportunity worth looking at,” he says.

What’s the potential financial impact if a new drug were to emerge from MTSU’s study of TCM extracts? Altman says universities that have developed a drug can get anywhere from $100 million to $700 million per year in licensing fees for at least 10 to 15 years. But to get a product to market and create the windfall, universities usually partner with large pharmaceutical outfits (often based outside their state) to fund the discovery process.

Alternatively, McPhee believes there is a homegrown option that could create big opportunity for Tennessee. 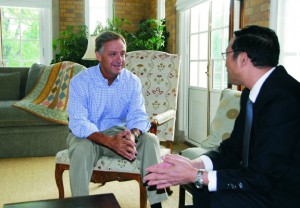 “This could lead to significant jobs, perhaps the establishment of a pharmaceutical company in our state, and with a manufacturing plant where the drugs might be made,” McPhee says. “This is one of those significant opportunities to potentially see state dollars to grow industry later. We can own and leverage the final product. So perhaps this is an investment opportunity the state should pursue.”

Jump-starting the pharmaceutical industry in Tennessee is certainly an important priority for state economic development officials—in large part because the state doesn’t have one to speak of. And it is not unprecedented for the state to fund projects like this at other universities across the state.

“We have biotech supporting pharmaceuticals but we don’t have Big Pharma [in Tennessee],” McPhee says. “And Nashville is the perfect place for it.”

Windley concurs, stating flatly, “Like Tennessee, most states would like to see at-the-bench discovery work and pharmaceutical development.”

For the health of people and the Tennessee economy alike, the promise of TCM drug discovery at MTSU is one to watch.