Dr. Reed Thomas and his students help strike up the bands in Panama 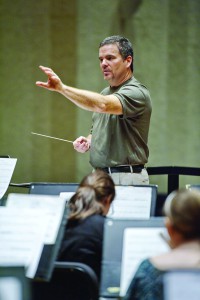 When MTSU’s director of bands, Dr. Reed Thomas, and 26 students from the MTSU Wind Ensemble visited a high school in Panama last May, they were greeted not in Spanish or English but in the universal language of music. It was their first stop in Panama, part of a two-week Central American performing and teaching tour, and they were met by salsa and merengue tunes and teens offering smiles instead of formal introductions. “They had decided that this was a better way to welcome us,” says Christen Vann, a senior elementary education major and flutist. “We spent 30 minutes just dancing and listening to music—and grinning from ear to ear.”

The MTSU group went to Panama to help train band directors and young musicians in a country that has little standardized music education and no tradition of high school bands. “Panama has one university that has some music courses, but they don’t have any music degrees,” Thomas says. “Most band directors are basically self-taught, but they have a love for music and they want to see better things happen.” Now better things are happening in Panama, where Thomas is part of an effort to establish high school bands throughout the country. Since its inception two years ago, the program “has spread like wildfire,” he says.

It’s based on a similar, highly successful program begun in Colombia to help keep teenagers out of gangs. Yamaha Corporation supplied instruments to the band members, whose participation became a point of family pride. By 2009, five years after the program’s launch, the number of high school bands there had grown from 60 to 1,100. That year, Thomas met Yamaha executive Juan Ramirez, who planned to start a band program in Panama. “Sign me up,” Thomas told him.

In July 2010, Thomas traveled to Panama and spent a week in Santiago de Veraguas, working with aspiring band directors from across the country. Within six months, 75 high school bands had been established, outfitted by Yamaha. 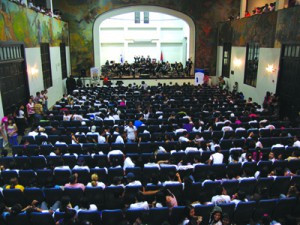 The MTSU Wind Ensemble performing in Central America in May 2011

In May 2011, when Thomas returned to Panama with his students, all 75 band directors traveled to Santiago de Veraguas to participate in his nine-hour training course. His students, meanwhile, worked with 50 members of a high school band started through the program.

Giving Panamanian teens more musical opportunities doesn’t just help keep them out of trouble, Vann notes. “It also raises the standard of living,” she says. “Adding the arts to education is essential to that—or that’s the belief we hold, as people who have benefited from it.”

It was with that mission in mind that the MTSU group also traveled to neighboring Costa Rica, where Thomas hopes to help establish a new program. Their guide, musician and teacher Cindy Bolandi, says her government, like Panama’s, has begun to recognize that music education should not be a privilege of the elite.

The culmination of the Central American trip was a joint concert given by the American and Panamanian students, whose 1,500-person audience included representatives from the government. “The pieces we did with [the Panamanian] students far surpassed any performance experience I have ever been a part of,” says Jim McCarl, a trumpeter and fifth-year instrumental music education major. 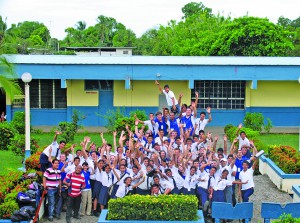 MTSU Band members and Panamanian students pose outside of a school during the MTSU Wind Ensemble’s 2011 visit.

But the small moments were also rewarding as the American students—most of them music education majors—worked one-on-one with the Panamanian teens. Chase King, a clarinetist and fifth-year instrumental music education and philosophy major, says overcoming the language barrier was easy, thanks to “the universal language of music.” He added that the Panamanians’ eagerness to learn made them easier to teach than typical English-speaking students.

And the teaching went both ways. While the Americans shared their musical expertise, the Panamanians shared their determination to learn despite lacking the resources many American students take for granted. Trombonist Brad Keesler, a second-year graduate student in music performance, says the Panamanian clarinet players used their lunch money to buy reeds, and trumpet players fashioned mutes from plastic soda bottles.

When MTSU’s trombonists pooled their money to buy new mutes for their Panamanian counterparts, the teens’ band director cried.

On the last day of the trip, the tears flowed again—and this time “it was everybody,” Vann recalls. “We had become so attached to each other after so little time.”

Ever resourceful, the Panamanians have kept up with their new American friends through the other universal language: Facebook.

[Editor’s Note: “Angels in the Architecture,” a CD by the MTSU Wind Ensemble under the direction of Dr. Reed Thomas, was released commercially last year. It is the first and only recording by a Tennessee collegiate ensemble on the world’s largest classical music label, Franklin, Tenn.-based Naxos, and its Wind Band Classics subsidiary.]