A historic flood uncovers an active stratum of archeological looting 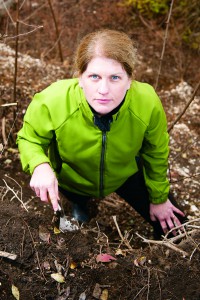 Dr. Tanya Peres on the banks of the Cumberland River

The thousand-year flood that submerged downtown Nashville in May 2010 also swept away thousands of years of human history: prehistoric burial sites along the banks of the Cumberland River.

Tanya Peres, associate professor of anthropology, is determined to document what is left—if grave robbers don’t get there first.

Rivers have always played host to human ritual. Thousands of years before Jesus was baptized in the Jordan, people along the Cumberland gathered at its edge to bury their dead. Peres, an associate professor of anthropology, has surveyed a number of prehistoric gravesites in the southeast United States and one in Panama. But in spring 2010, she still hadn’t explored the Cumberland, whose banks harbor the remains of Tennessee’s earliest residents.

Aaron Deter-Wolf of Tennessee’s Division of Archeology had told Peres that the Cumberland’s archaic sites were fascinating but largely undocumented; the division had some artifacts from sites excavated decades ago, but they were never properly analyzed. “I had always wanted to get out to these sites, but other commitments had kept me away,” Peres says. “And I thought, ‘Well, there’s plenty of time.’”

Time ran out in May 2010, when floodwaters eroded as much as 30 feet of shoreline in some places, washing away at least 12 prehistoric sites completely. “Those sites are at the bottom of the Cheatham Dam now,” Deter-Wolf says.

As soon as the waters receded, he and Peres set out to survey the damage. They knew they had to work quickly to document what remained.

Grave robbers have long found fertile ground along the Cumberland, where snail and mussel shells mark archaic burial sites, most of them 3,000 to 7,000 years old.

Evidence suggests people placed the shells deliberately, Peres says. “There’s no evidence of daily life there,” she notes. “These are specifically constructed areas where they were burying their dead, and that’s what the looters are after.”

The shells act as a natural preservative for human remains and the ritual art often buried with them; the gravesites, or “shell middens,” remain intact unless they are forcibly disturbed. Days after the flood, Peres and Deter-Wolf found shell middens savaged by nature and then further plundered by humans, to whom the exposed shells signaled the presence of artifacts highly prized on the black market. Looters had used tools to undercut the flood-shorn riverbanks, leaving holes big enough to stand in.

“We were astonished by the erosion,” Peres says, “and I couldn’t believe the amount of looting that had occurred just in the few days since the waters had receded. So we said, ‘Okay, we need to do something about this.’” 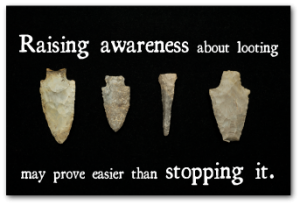 Along with Shannon Hodge, assistant professor of anthropology, Peres and Deter-Wolf applied for an emergency grant to assess the flood and looting damage along 50 river miles. The National Science Foundation approved the $29,000 grant within 24 hours, Peres says.

The three researchers and 10 MTSU students spent six months surveying 128 riverbank or bank line sites and documenting samples from the 20 most endangered. Student Joey Keasler says he was shocked at the sight of bones scattered like trash along the water’s edge. “The looters just hack into the soil with picks and shovels,” he says, “and if they find human remains, they just toss them over their shoulder.”

Because the survey area included government land, the team coordinated with agencies like TVA, the Army Corps of Engineers, and the Tennessee Wildlife Resource Agency, meeting with them to discuss how to protect vulnerable sites and recognize signs of looting.

The effort has aligned groups—archeologists, government agencies, Native Americans—that sometimes have had competing interests. “The looting issue brings us all together,” Deter-Wolf says.

To catch a thief

Raising awareness about looting may prove easier than stopping it.

Deter-Wolf notes that disturbing human remains became illegal only within the past three decades. For years, Tennesseans who never would have disinterred their own ancestors thought nothing of unearthing native remains, and although artifacts on government property are legally protected, there is no equal protection regarding private land—often the site of the most egregious grave robbing.

Some landowners even abet the looting, leasing their property to people who mine it using backhoes and mechanized shaker screens. Looting on this level is a professional operation, Deter-Wolf says. The target is not “an arrowhead that you could sell on eBay.”

Peres is purposefully vague about the targeted artifacts, saying only that they are made of bone, stone or shell, and obviously ceremonial. “They have no wear on them, some are larger than life, and they’re put together in caches,” she says.

“When they show up on an auction website—I’ve even seen some on craigslist—it’s clear to archeologists that they came out of a burial.”

The weak economy seems to have triggered more grave robbing nationally, Peres says. But since her work garnered local media attention, she’s seen “a noticeable decline” along the Cumberland.

Now Deter-Wolf gets regular tips about looters from “old-timers” familiar with the river. “Some of those guys may have dug when they were young,” he says, “but now they’ve become part of this avocational community that recognizes the value of archeology.” 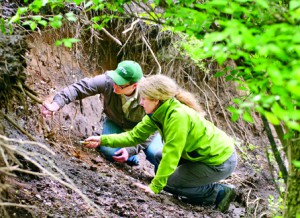 With little law enforcement devoted to fighting a “victimless crime,” public vigilance may be the best protector of the Cumberland’s shell middens. Despite their vulnerability, Peres says she won’t excavate an entire site unless it is threatened by development. Instead, she and her students collect a few samples, study them, and turn them over to the state. It’s a balancing act, she explains:

“It behooves us as archeologists to be sensitive to cultural resources, but also to get as much information as we can from them, so we can tell the story of these people, because they’ve left no written record. This is all we have left of them.”

Modern archeology is more about preservation and documentation than excavation, Deter-Wolf adds. “We realize now that we can’t dig up all the things that are there,” he says. “That’s how you end up with 60-year-old collections that haven’t been analyzed. For the first time, we have controlled samples from these sites that Tanya and her students are processing. That’s a baseline for all kinds of future research.”

A number of students are now using the data gathered as a result of the NSF RAPID grant for Anthropology Senior Theses and independent research projects. Deter-Wolf, Hodge, and Peres all have several upcoming publications in professional journals. Deter-Wolf and Peres have received a grant from the Tennessee Historical Commission to radiocarbon date the shell midden sites they surveyed to create a timeline of prehistoric occupation along the Middle Cumberland River. All of this as a result of the survey/NSF grant.

Peres also has applied for additional funding from the National Science Foundation to more intensely explore one of the most threatened sites she surveyed. The funding request is for approximately $500,000 over three years. The fieldwork will include MTSU undergraduate students and perhaps some local high school students. (A decision on funding was to be made after press time.)

Peres will clearly play a big part in that future research; she hopes next to use noninvasive technologies like sonar and radar to assess more sites farther from the riverbanks. Although the Cumberland holds archeological secrets that “could span 10 careers,” she says she hadn’t expected to find her life’s work there—or to lead a crusade against crime.

“I never really planned on getting involved on this scale,” she says, “but the stars just aligned. An event happened, we saw what was going on, and it was like, ‘I don’t think I have a choice in the matter anymore.’”