'Lead Belly: The Jailhouse is .. 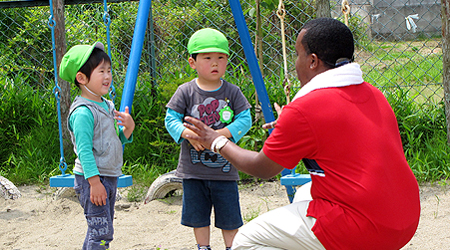 By journeying to earthquake-scarred Fukushima, Japan, in June, 10 students can lay claim to being the founding fathers and mothers of a new annual study-abroad opportunity at MTSU.

Dr. David Schmidt, vice provost for international affairs, says a different professor will guide the expedition each summer and emphasize a different subject each year.

“We don’t want this to be centered on one faculty member or administrator,” Schmidt says, “so it’s Dr. Doug Heffington’s program next year, and I think he wants to focus on sustainable economies.”

Heffington, director of the MTSU global studies program, accompanied Schmidt and the students to Fukushima for 10 days of debris cleanup and personal service. The MTSU delegation, who were chosen on the basis of grades and essays, served hot meals, entertained kindergarten children and learned about disaster-response procedures.

The Japanese city is still struggling to recover from a massive March 11, 2011, earthquake and resultant tsunami that engulfed the coastal area. Some 16,000 people lost their lives. Thousands more lost their homes and possessions.

Fuel meltdowns in three reactors at the Fukushima Daiichi nuclear power plant compounded the nation’s trauma, creating a societal ripple effect that is lasting long after the last aftershock subsided.

No MTSU representatives ventured into unsafe areas. Members of the delegation say that although the stigma of the word “Fukushima” lingers in Japan, the citizens refuse to succumb to their circumstances.

“The beauty of the study-abroad program is bringing students into this completely foreign environment, and it hits them for days on end,” says Schmidt. “Now the learning takes place. Now they look at the way things are done in Murfreesboro compared to here, and they’re able to digest it all.”

MTSU study-abroad students pose for a photo with a Fukushima, Japan, farmer who is vowing to keep his orchard business afloat after the deadly earthquake, tsunami and nuclear disaster that almost devastated the region in 2011. (photo courtesy of Julie Vandel and Preston Nalls)

One of Caitlyn Mayo’s most poignant memories is that of an orchard owner, who told the students of his determination to sell his succulent peaches, tart cherries and crisp apples in Tokyo or wherever he can, despite consumer resistance borne of fear.

Mayo, a senior theatre major from Woodbury, says the farmer refuses to resort to laying off his workers, regardless of his economic situation. He told the group, as they snacked on his wares, that he would rather sell his car than get rid of any of his employees.

“He was willing to give up his own stuff to make sure that his workers didn’t have to go without,” Mayo recalls.

Preston Nalls, a senior electronic media communication major from Franklin, intentionally wore a shirt that says “I Love Fukushima” for a brief side trip to Tokyo to gauge public reaction.

“There was a group of businessmen coming back from a bar, and I passed them along the way,” says Nalls. “They were laughing, saying, ‘Why is he wearing a Fukushima shirt?’”

Yet the resilience of the Japanese people was apparent to everyone. Nalls says the survivors are not reminiscing or moping; they’re looking ahead and getting on with their lives.

“The recovery is definitely going to be a long, ongoing process, because the amount of devastation that we saw in the different areas that were really heavily impacted—you cannot imagine unless you’re standing there and you see it firsthand,” Mayo says.

“The gravity of what you’re looking at is just enormous.”

Mayo remembers seeing a coffee shop in the middle of an empty field, where a town once stood. The restaurant was open for business.

The students found that media descriptions of Fukushima Prefecture did not necessarily match the reality on the ground.

“Most of the countryside was stunning,” Mayo recalls. “It’s very, very pretty. It’s very similar to seeing the Smokies.”

They also denounce television reports that Fukushima had been reduced to a ghost town, calling the claims totally untrue.

“Japan has really made a tremendous amount of progress,” Schmidt notes, adding that he wanted the students to think about how the Japanese have handled the situation and how we would react if something of similar proportions happened here. He also wanted them to develop an appreciation for volunteerism.

“A special student will want to volunteer, and once they do it, this is a trait that becomes a lifelong practice,” says Schmidt. “I was extremely proud of these students. They were fantastic ambassadors.”

Even amid the overwhelming ongoing struggle they witnessed, there was time for friendship and laughter. Julie Vandal, a rising junior and organizational communication major from Fayetteville, says her fondest memory is the hospitality of her home-stay family.

“The daughter had already left for school before I woke up in the morning, and she left me a little letter at the breakfast table,” says Vandal. “It’s my most prized possession now. She was just saying ‘it was great to meet you’ and ‘it was a great experience.’ They were just so nice.”

As the delegation dined and relaxed with students from Fukushima University, MTSU strengthened its ties with its institutional partner, paving the way for future full-time student exchange.

“We only got to stay there 10 days, and I left with about 20 new best friends,” Mayo says.

Adds Nalls: “I can honestly say that those were the best 10 days of my life so far.”

(You can view a gallery of some of the Fukushima study-abroad participants’ photos below; click on each photo to see a larger version.)