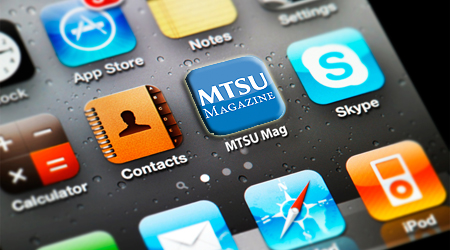 Readers of the popular MTSU Magazine may now download a free electronic version for their iPads or iPhones.

The MTSU Mag app, now available on iTunes, includes multimedia content built into every issue that isn’t available in the print editions. (Click the MTSU Magazine app button at left for the App Store link.)

The latest edition of MTSU Magazine details the bright future for science education and research at MTSU. The catalyst? Construction has begun on a new $147 million science building that was approved by Gov. Bill Haslam and the Tennessee General Assembly earlier this year.

The new MTSU Magazine app allows readers to enjoy exclusive multimedia content on iPhones and iPads by clicking directly on features in the magazine.

Other stories in the summer 2012 edition include:

Printed copies of MTSU Magazine are distributed twice annually to approximately 100,000 alumni readers. Additional copies of the alumni-and-friends publication are distributed to interested stakeholders, including state lawmakers and members of the Tennessee Board of Regents.

The magazine also is available online at www.mtsumagazine.com.