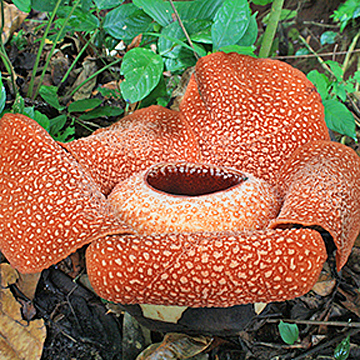 Her five-month study through the University of Bengkulu has taken Hidayati, fellow professor Agus Susatya and two students to the Indonesia rain forest on the Indonesian island of Sumatra between the South China Sea and Indian Ocean.

There are 28 known species of Rafflesia, a parasitic flowering plant. Louis Deschamps first discovered it in Java, Indonesia, between 1791-94. The flower was named after an expedition leader, Sir Thomas Stamford Raffles, around 1818.

Despite “lots of rain that make the trails slippery” in March, Hidayati said research on threatened or rare species is going well. Early on, they visited five populations, some in the old growth forest and off the road and others in the protected forest, which is relatively easy to visit, she said.

“I have been able to get the population structure of the flowers and the host plants,” she said. “I also visit the sites regularly to get the development rates of the flower buds.”

As photos attest, Rafflesia reaches a decent size. Some she was photographed with ranged from 27 to 35 inches wide and 3 feet in diameter.

Hidayati, whose husband, Jeffrey Walck, is an MTSU biology professor, said the flowers stay open for about five days before wilting.

Hidayati has seen three flowers, but they were not in the same location. Flowers are either male or female, she said, but if no male and female bloom at the same time, no seed will be produced.

A Rafflesia flowering plant growing in the Indonesia rainforest on the island of Sumatra. They can reach 3 feet in diameter.

“They do not grow back in the same exact location,” she said. “One host plant usually has lots of flower buds. So the population dynamic of this plant is very unstable and change quickly.”

Hidayati said she was extremely happy to learn she had received the prestigious Fulbright, which is hard to obtain, and resume research she began years ago.

The major downside for Hidayati, a U.S. citizen, was leaving Walck and their 12-year-old son, Edwin, back home in Murfreesboro. Husband and son will reunite with her in May in Indonesia, where the rest of her family lives.

During her time in Indonesia, Hidayati will serve as a guest lecturer and attend seminars. May 12-14, she will present her progress report at a meeting in Bali with other American and Indonesian senior and junior researchers.

The Fulbright program is the flagship international educational exchange program sponsored by the U.S. government. It is designed to increase mutual understanding between the people of the U.S. and the people of other countries.

For more information about the Fulbright for faculty, visit www.iie.org/Programs/Fulbright-US-Scholar-Program.

MTSU adjunct biology faculty member Siti Hidayati points to the Southeast Asia island of Sumatra in Indonesia, which is both her native country and where she is on a five-month research project on a Fulbright U.S. Scholar Program award. (MTSU photo by News and Media Relations)