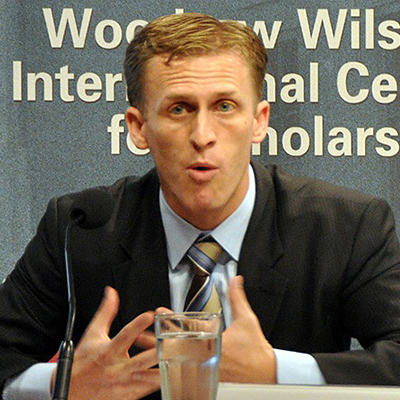 A top U.S. diplomatic official offered his perspective on one of the world’s most volatile regions in an address at MTSU. Jason Lewis-Berry discussed “Conflict Prevention and Response after Iraq and Afghanistan” April 22 in the Tom Jackson Building.

You can watch an excerpt from his talk below.

A component of MTSU’s master’s degree program in international affairs, this initial offering in what will become a yearly lecture series was  intended to provide greater insight into the complex issues facing the world and how key players deal with them.

The master’s degree program, which is offered by the MTSU Department of Political Science, will recruit future lecturers from international organizations, business corporations and governmental agencies.

Lewis-Berry has been director of overseas operations in the Department of State’s Bureau of Conflict and Stabilization Operations since March 2008. He was an adviser to nonviolent civilian Syrian opposition groups in Turkey in 2013 and partnered with U.S. special operations forces to coordinate strategy against militant movements in central Africa from 2011 to 2012.

He served as chief of staff for the Kandahar Provincial Reconstruction Team in 2010, managing the daily operations of a binational group working in support of the Afghan government.

Lewis-Berry also has led multinational civil-military planning and assessments in the field in Mexico, Bangladesh and the Democratic Republic of the Congo. The U.S. State Department can deploy him to unstable environments worldwide on 48 hours’ notice.

A team member of the Council on Foreign Relations and a Truman National Security Fellow, Lewis-Berry holds a master’s degree in foreign service from Georgetown University and a bachelor’s degree in journalism from the University of Oregon.

To learn more about MTSU’s international relations master’s degree, listen to a recent interview with Tesi on “MTSU On the Record” here.