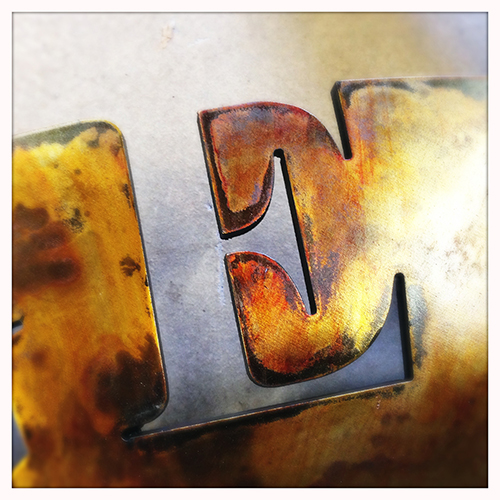 A community arts partnership between the City of Murfreesboro, local schools and the MTSU Department of Art will culminate at noon Friday, May 31, with the unveiling of a new sculpture by MTSU art professor Michael Baggarly.

A free public reception is set for noon May 31 on the Murfreesboro Greenway System’s Gateway Island when the sculpture, comprising interlocking infinite rings reading “Imagine,” “Home,” “Progress,” “Unite,” “Community” and “Hope,” will be formally presented to the community.

The idea for the design, submitted by then-Siegel High School student Lauren O. Hughes, was chosen from proposals submitted from Murfreesboro City and Rutherford County Schools students and displayed in the rotunda of Murfreesboro’s City Hall.

Hughes is now an MTSU pre-med student, earning her second degree, with a minor in art.

Baggarly, an associate professor of art at MTSU who has exhibited works at the Frist Center for the Visual Arts in Nashville as well as in New Zealand and Mexico, was chosen to translate the design into an artistic and technical reality.

This detail of MTSU art professor Michael Baggarly’s new community sculpture will be displayed in full  at the public unveiling ceremony on the Murfreesboro Greenway System’s Gateway Island. (Photo courtesy of Michael Baggarly)

The Murfreesboro City Hall Art Committee and the city’s Parks and Recreation Department are hosting the reception.

Gateway Island can be reached by traveling Medical Center Parkway west to Gateway Boulevard, then taking a right onto Kennedy Drive and another right onto Williams Drive.

More parking will be available at the Greenway’s West College Street Trailhead at 1902 W. College just past the railroad overpass.

To finalize the design for the Gateway Island sculpture, the City Hall Art Committee “worked closely with city administration, the parks department and Baggarly to incorporate elements of the student design while also addressing safety and aesthetic issues,” said MTSU’s Eric Snyder, chair of the art committee and director of the university’s Todd Art Gallery.

“It’s been an arduous but thorough process to get this accomplished. The support and guidance provided by Mayor Bragg, the city manager’s office and by the park’s department has been invaluable to the art committee.”

Plans are now underway for a new process to place other works of public art along more sections of the Murfreesboro Greenway System, Snyder said.

For more information about the event, contact Greenway Program Coordinator Melinda Tate at 615-893-2141 or Snyder at 615-542-6368. You also can learn more about Gateway Island at the Murfreesboro Parks and Recreation Department’s Web page.

The Murfreesboro Greenway System’s Gateway Island, shown above, will be the site of the special unveiling ceremony on May 31 for a new community sculpture. (Photo courtesy of the Murfreesboro Parks and Recreation Department)