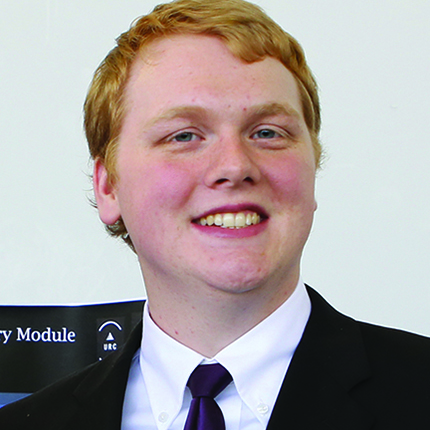 The Murfreesboro resident hopes that winning a Goldwater Scholarship assists him in reaching his dream.

Murphy, a University Honors College student with double majors in physics and philosophy, is a 2013 recipient of a Goldwater award from the Barry M. Goldwater Scholarship and Excellence in Education Program.

The Goldwater Foundation provides a continuing source of highly qualified scientists, mathematicians and engineers by awarding scholarships to college students who intend to pursue careers in these fields.

The scholarship program was established in 1986 by Congress to honor the late senator, who served his country for 56 years as a soldier and statesman, including 30 years of service in the U.S. Senate.

“It definitely took a few moments to process,” the Siegel High School graduate said about learning of the award from Laura Clippard, director of the Honors College’s Undergraduate Fellowships Office.

“I told Ms. Clippard, ‘Are you serious?’ It felt good. I had that sense of ‘I guess I’m good in science,’ but it is especially nice when others validate this.”

The one-year financial award covers tuition, fees, books and room and board up to a maximum of $7,500 per year.

Murphy also is an Honors College Buchanan Fellow, the highest scholarship offered by the university to attract superior scholars from across the country. The four-year Buchanan Fellowships are offered to 20 incoming freshmen each year.

Murphy, one of five Tennessee residents to receive the Goldwater distinction, said his research is in optics.

“What I’m hoping to get into is atomic physics,” he said. “That’s what I’m excited about and what I hope to try.”

Murphy said the Goldwater Scholarship gives him “more motivation to do more. It helps me to think about the future more. It makes me want to go for bigger challenges.”

Those “bigger challenges” include pursuing Marshall and Rhodes scholarships. Both would be opportunities in the United Kingdom.

Marshall Scholarships finance the studies of young Americans of high ability in the U.K. Up to 40 scholars are selected each year to study at graduate level at a U.K. institution in any field of study.

The Rhodes Scholarship is an international postgraduate award for selected foreign students to study at the University of Oxford. It is considered the oldest and most celebrated international fellowship award in the world.

At MTSU, Murphy has held membership in the Society of Physics Students, serving as president in 2012-13. He was inducted into Sigma Pi Sigma, a physics honor society, on May 2.

This marks the third consecutive year that one or more MTSU students have received Goldwater awards. Current MTSU students who are interested in applying should email Clippard at Laura.Clippard@mtsu.edu.

The Honors College also maintains a Web page full of information about national scholarships at www.mtsu.edu/honors/ufo/index.php.