‘MTSU On the Record’ tours the.. 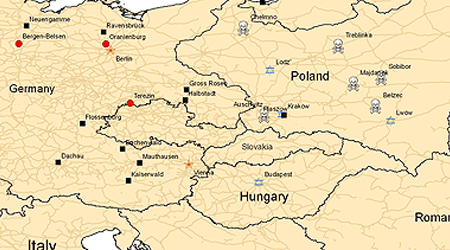 Maps created by MTSU students to show the breadth and depth of genocide in the world will be shown to members of the Tennessee General Assembly next year.

Dr. Patricia Boda’s cartography class used geographic information systems and manual mapmaking for the “Geography of Hate” projects that will be displayed at Legislative Plaza on April 1, 2013, the date the state commemorates Holocaust Remembrance Day.

The event, called “Yom HaShoah” in Hebrew, is “a testament to the commitment of all Tennesseans to ‘never forget’ those who perished in the Holocaust,” according to www.tennesseeholocaustcommission.org.

For the class, each student was required to use maps to display locations where genocide either has taken place or is taking place.

“I try to do things that will give them personal, actual real-world experience and do them some good career-wise,” said Boda, an assistant professor of geosciences.

Jordan Brasher’s map shows the various routes that Native Americans were forced to take following passage of the Indian Removal Act of 1830. The top trail, in purple, is the one labeled the “Trail of Tears.” Click on the map above to see a larger version.

Jordan Brasher, a junior geoscience major from Milan, Tenn., chronicled the forced exodus of Native Americans from their homelands in the 1830s, a tragedy known as the “Trail of Tears.”

“I wanted to talk about the individual Cherokee removal routes and how they correlated to the death rates throughout the trip,” said Brasher, who is president of MTSU’s Geography Club. “My grandmother’s grandmother was a full-blooded Cherokee.”

Ian Murray, a native of Spring Hill, Tenn., who graduated at the end of the fall 2012 semester, singled out one Holocaust survivor and traced his path through Europe during World War II.

Ian Murray’s map shows the various European locales that mark Knoxvillian Holocaust survivor Arthur Pais’ tragic trek during the years of the Third Reich. Click on the map to see a larger version.

Danielle Kahane-Kaminsky, executive director of the Tennessee Holocaust Commission, said she will show the students’ projects April 1 at the State Annual Day of Remembrance to commemorate the six million Jews who were murdered in the Holocaust, as well as the millions of other victims of Nazi persecution.

“A lot of research is being done using satellite imagery and mapping to try to identify human rights violations before they occur,” said Kahane-Kaminsky. “The research from international lawyers and people who specialize in genocide … tells us the best way we can handle this politically is through prevention.”

Kahane-Kaminsky said she hopes MTSU can make a connection with the Yale University Genocide Studies Program, which she said is at the forefront of using this type of technology.