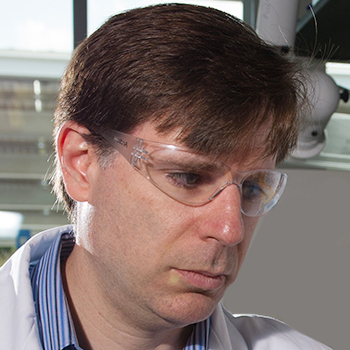 For the 19th annual MTSU Department of Chemistry Golden Goggles Award lecture, event organizers have invited one of Georgia Tech’s top researchers to serve as the keynote speaker.

Dr. Christopher “Chris” Jones, associate vice president for research, will be speaking at 6 p.m. Friday, April 3, in Science Building Room 1003. It is free and open to the public.

For parking and building location information, a printable campus map is available at http://tinyurl.com/MTSUParking14-15.

“We invited him to share his great knowledge on green chemistry and technology development for CO2 (carbon dioxide) separation and conversion,” said Dr. Keying Ding, an assistant chemistry professor.

Jones, 41, a Detroit, Michigan-area native, said he is “honored and pleased to have the opportunity to meet students, faculty and staff at MTSU and discuss our shared interest in chemistry.”

“Chemistry is the ‘central science,’ touching all aspects of daily life, and any opportunity to share my passion for chemistry with others is always rewarding,” he added.

Jones, who serves as the New-Vision Professor of Chemical and Biomolecular Engineering at Georgia Tech, will speak on the carbon dioxide-related research he and the Jones Research Group have been conducting.

“In my opinion, the most important problem of the current era is the energy/climate problem associated with all the carbon dioxide human activity has produced in the last 100 to 150 years, which is altering the global climate,” he said of his planned talk.

“My research talk will frame this problem for students, faculty and staff unfamiliar with the details of it, as well as how my own research is aimed at making large-scale carbon dioxide capture feasible,” he added.

Jones directs a research program focused mainly on catalysis and carbon dioxide separation, sequestration and utilization. Among many honors, he received the Ipatieff Prize from the American Chemical Society in 2013 for his work on palladium catalyzed Heck and Suzuki coupling reactions.

His efforts have brought in more than $46 million in sponsored research in the past 15 years. In his vice presidential role at Georgia Tech, he directs campuswide research administrations with a focus on interdisciplinary research efforts and policy related to research institutes, centers and research core facilities.