How to Support MT Athletics Wi.. 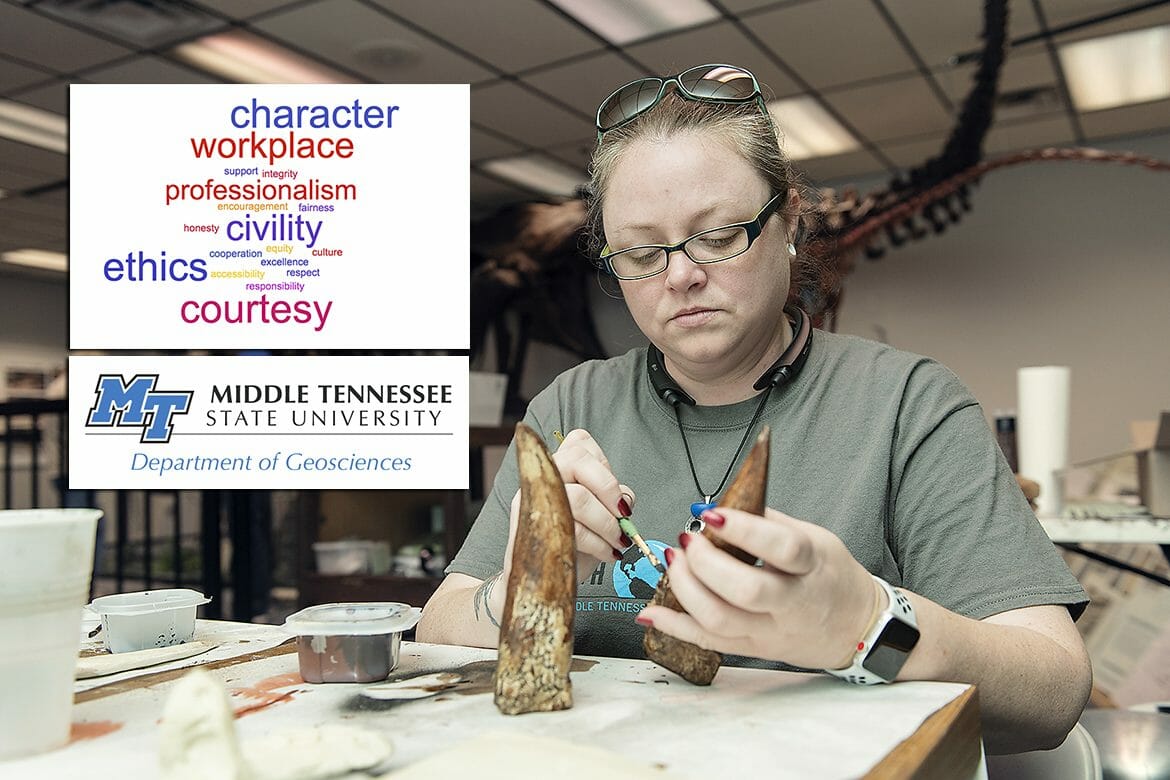 An MTSU department is heeding the call for greater civility and decency in the workplace and in academia.

Using the American Geophysical Union’s ethics code as a guide, the MTSU Department of Geosciences has fashioned its own code of conduct for faculty, staff and students.

The move toward a departmental code of conduct precedes the issuance of a new report finding that 58 percent of women in academia have been sexually harassed. The report by the National Academies of Science, Engineering and Medicine also finds that harassment is worst in the STEM — science, technology, engineering and mathematics — fields.

“Regardless of who is instigating a problem, the department wants to take that seriously and wants to address that,” geosciences assistant professor Jeremy Aber said.

The departmental code addresses topics such as reporting irresponsible practices, including taking credit for a colleague’s research; stewardship of the earth; adherence to laws and regulations; and acknowledgment of colleagues’ achievements.

The American Geophysical Union is a professional organization that promotes “discovery in earth and space science for the benefit of humanity,” according to its website, http://sites.agu.org.

The organization issued its Scientific Integrity and Professional Ethics handbook in 2017, defining harassment, bullying and discrimination as scientific misconduct and outlining consequences for failure to adhere to proper conduct guidelines. You can read the AGU handbook here.

Led by Aber, the MTSU Department of Geosciences adapted its code from the AGU handbook and used input from faculty and staff to make it pertinent to specific departmental circumstances. The existing version was approved March 16, 2018.

The code defines bullying, for example, as “the use of force, threat or coercion to abuse, intimidate or aggressively dominate others in the professional environment that involves a real or perceived power imbalance.”

“These actions can include abusive criticism, humiliation, the spreading of rumors, physical and verbal attacks, isolation, undermining and professional exclusion of individuals through any means.”

Aber has suggested putting a link to the code on students’ class syllabi to familiarize them with it. The code is available here.

While the departmental code does not spell out specific consequences for violators, it emphasizes that misbehavior should be reported and addressed “including, but not limited to, sanctions or expulsion as allowed by MTSU policy.”

Aber said the code applies not only to classroom or on-campus behavior but also to behavior on field trips and study-abroad trips involving departmental faculty, staff and students.

“These things are deeply important in a way that, if we don’t take them seriously, will erode the trust that the public has in us,” Aber said. “It erodes the value of what we’re providing in terms of the educational experience. It devalues the degree.”

MTSU geosciences major Novella Greer creates a replica of a dinosaur tooth at Earth Experience: The Middle Tennessee Museum of Natural History, located on Old Salem Road in Murfreesboro. Greer is among the students, faculty and staff in the Department of Geosciences now working under a new departmental code of conduct. (MTSU file photo by Andy Heidt)