MTSU geoscientists insist on i..

How to Support MT Athletics Without Being a Sports...

How to Support MT Athletics Without Being a Sports Fan 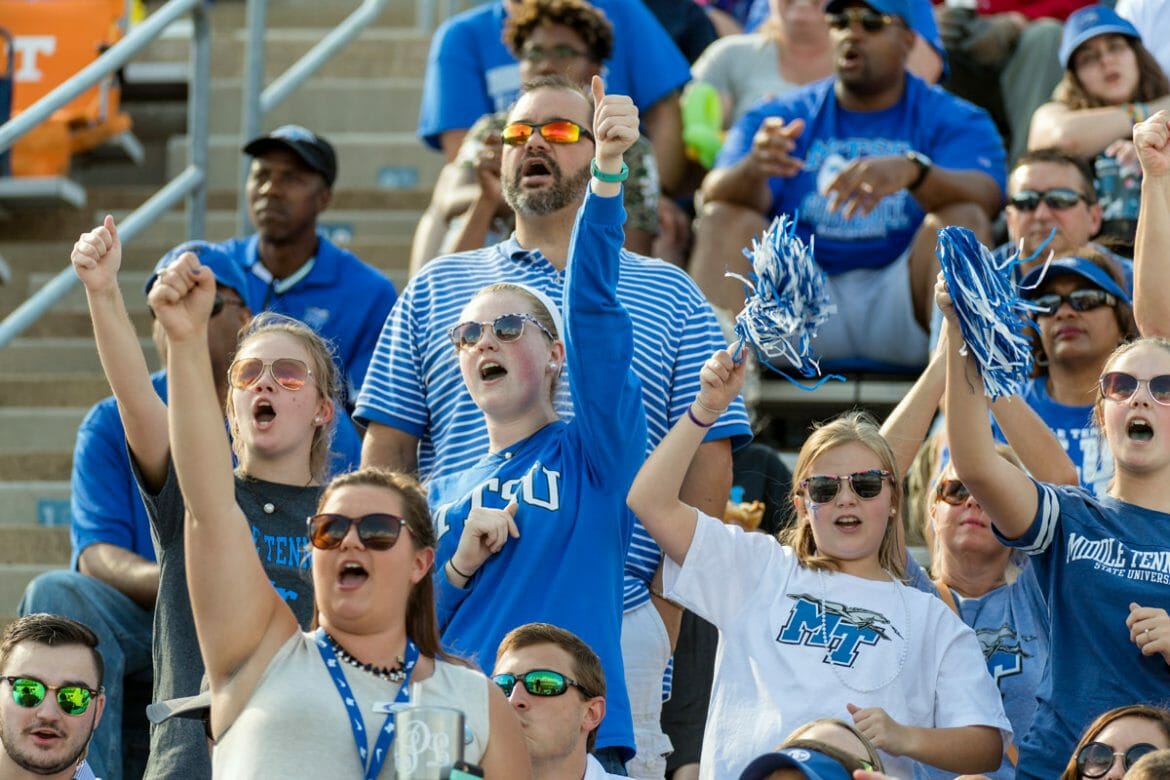 Let’s face it: you probably only watch the Super Bowl for the highly-anticipated commercials and delicious finger foods. There is no shame in admitting it; watching sports is not for everyone. Different people have different interests and most people often take watching sports at face value. This has resulted in a popular exclamation emerging among non-sports fans: “Sportsball!” People will use the word at any point when a conversation begins to involve sports, thus resulting in the loss of their attention.

Once again, there is no shame in not liking sports. But what if attending athletic events could mean a whole lot more than watching a game that doesn’t make sense to you? Going to an MTSU game can be a cheap way to enjoy time with friends, meet new people, and feel a greater connection to your school’s successes.

Here are a few reasons you should attend games, even if you have no earthly idea of what is going down on the field or court.

All MTSU students get into home games for free!

“I would never pay to go watch people hit each other or shoot a ball through a hoop!” If you have ever said anything similar to this, congrats! It’s your lucky day! Every MTSU student can simply scan their ID at the gate and enjoy the game. No matter if you’re going to cheer on our football, tennis, or soccer team, all you need is your MTSU ID and a little bit of spirit.

If it is one of those gorgeous days on campus, a great place to spend it would be in the stands at a baseball game. If the sky is grey and your plans are washed away, stay dry and cheer on the Blue Raider basketball or volleyball teams.

One of the best parts of our program is that most of our athletic facilities are on-campus, so you can even walk from your dorm or classroom to the game!

Show off your True Blue spirit!

You may not be a sports nut, but there’s a great chance (I hope) that you love your school and the community forged from it. Dressing up in blue and joining the cheerleaders in their chants for our team’s success is the best way to show how much you love MTSU. Don’t stress if you aren’t sure when to cheer or boo, as there are thousands of others sitting near you. Just follow their lead!

Another thing to consider is that the athletes on the field are the same people who may sit near you in the classroom. Coaches heavily emphasize the “student” in “student athlete,” so we are talking about students who must be focused and driven almost every hour of the day. Cheering them on is something that they will not only appreciate, but will fuel them to victory.

If you don’t know our fight song by heart, here are the words:

“Blue Raiders ride on to vic-t’ry

Never failing in the fight

Of the name that’s held most high

This will be our battle cry

For the one, true pride of the Blue

For the one, true pride of the Blue

If the Blue Raiders are successful (and they likely will be), be prepared to sing it early and often.

It may not be your grandma’s pigs-in-a-blanket or the fancy dip your aunt has (unsuccessfully) tried to perfect for years, but you can find some solid concession options, often with some sweet deals for students. For example, the concession stand at Reese Smith, Jr. Field, home of our baseball team, often runs a promotion offering $1 hot dogs and soft drinks for students at their games.

My usual snacks of choice at games include nachos at basketball games, a hot dog and Pepsi at baseball games, and a trip to the Puckett’s Trolley at football games.

Exposure for Athletics brings more funding to other areas.

There’s a big reason why colleges pump so much cash into their athletics programs. It isn’t because of a lack of interest in other areas, but because athletics bring massive exposure to the brand and message of the entire school.

For example, when MTSU upset Michigan State in the 2016 NCAA Men’s Basketball Tournament, it resulted in a all-time high social reach over 168 million people, according to our Division of Marketing and Communications. This translates to more students from around the world considering MTSU and has allowed the school to invest more in not only athletics, but in other departments as well.

If you ask any player about the contributing factors to their success, they will, without a doubt, list the support from their fans near the top of the list. It feels like a no-brainer to support our teams, as you are then tied into the success of the university as a whole while having fun and not spending much money along the way.

Ready to go catch a game? Here is a link to a calendar containing every game or match for every team. Included are times, venues, and whether or not the game will be televised. Enjoy the game!