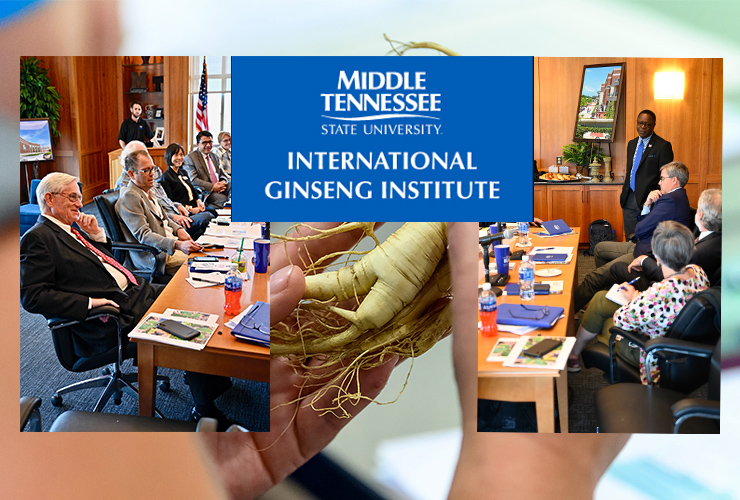 Middle Tennessee State University continues helping stakeholders statewide navigate the exciting possibilities regarding ginseng that grows in the wild — and with a growth period shortened in a university laboratory — across Tennessee.

A group of ginseng experts and enthusiasts met at MTSU recently to exchange ideas, evaluate current trends and plan for the future during a two-day symposium focused on research surrounding the wild root and its medicinal and supplemental value. 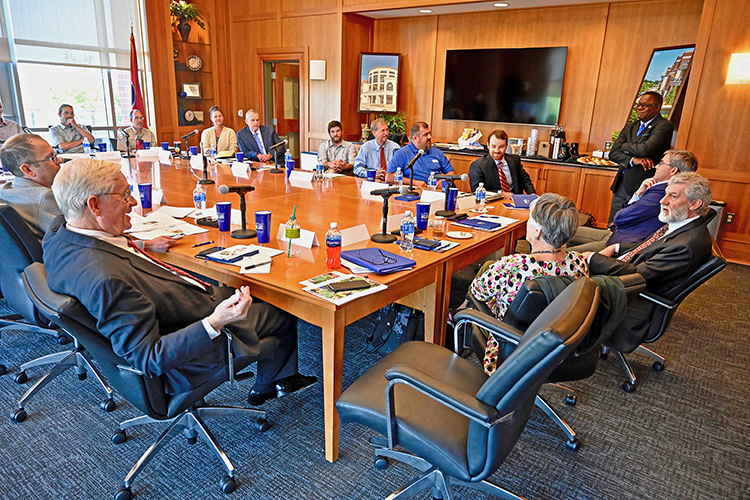 MTSU President Sidney A. McPhee, standing far right, listens as alumnus Paul Martin Jr., seated left, who is now involved with the Tennessee ginseng export trade, makes a point during the Symposium on the Science, Traditions and Economics of Tennessee Ginseng in the Student Union President’s Conference Room. (MTSU photo by Andrew Oppmann)

Iris Gao, director of the MTSU-based International Ginseng Institute and associate professor in the School of Agriculture, leads the university’s ginseng research efforts, which could “produce data and knowledge that can assist citizens of Tennessee, especially those persons in the distressed counties of our state, by advancing the unique characteristics of this plant,” said MTSU’s David Butler, vice provost for research.

Butler, also dean of the College of Graduate Studies, oversaw the second day of events as leaders in the ginseng field gathered for the Symposium on the Science, Traditions and Economics of Tennessee Ginseng in the Student Union President’s Conference Room.

“There’s some easy things that can produce big results,” Martin said afterward. “With a very little bit of capital investment, the state can open a domestic market for industry, which will raise the income level of Tennessee’s most distressed counties.”

“So, my takeaway (from the meeting) is that the trajectory of market and the conservation of the plant can be easily changed with just a different approach than the traditional export market,” he added. 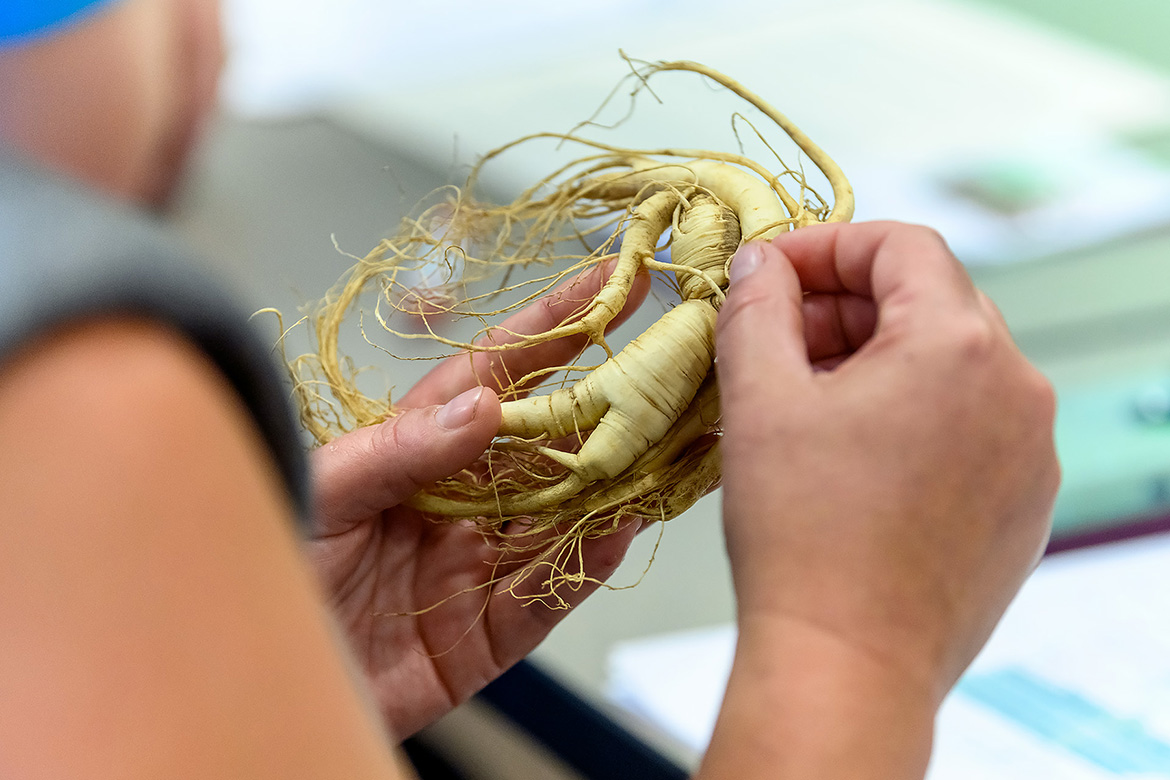 McPhee told the group the International Ginseng Institute “is a crown jewel and a model of success in our efforts to create collaborations that bring benefits not only to the university but to our surrounding community.” He said the study and trade of the ginseng plant holds “great humanitarian benefits, both in revitalizing international trade and in the quest for finding cures and treatments for the diseases and conditions that afflict mankind.”

“Our International Ginseng Institute and those responsible for its success, namely Dr. Gao and Paul Martin, represent a shining example of how MTSU has earned a reputation for excellence in research and discovery, in creating trade and bolstering the economy, in being on the vanguard of innovation that benefits many and in building bridges that position us as a leader on the global stage,” McPhee said.

Environmentalist, philanthropist and event sponsor George L. Lindemann said he wanted to be involved “because there’s a lot of excitement here at MTSU around ginseng, I live here and it’s an important plant on so many levels. The challenges facing it are important and can be addressed. They’re all excited here (at this meeting) to do something and the state is supportive. I jumped on board to try and help.”

An all-day session in the Miller Education Center second-floor atrium was in conjunction with meeting the next day, though more open to the public, with farmers, growers, buyers and sellers present, Gao said.

“The public was welcome as a continuous effort supported by a U.S. Department of Agriculture grant,” Gao said. “The latest information on ginseng conservation and cultivation was exchanged and an open forum discussion about the cultivation, economic, land use and future of the plant was held, with all presenters and attendees contributing.”

Gao said the “results of gathering together and discussion of the latest trends and research findings provided a platform that enabled the stakeholders meeting to start with a mutual understanding and reach actionable conclusions.”

Three nationally renowned ginseng researchers came to talk about the plant in Tennessee for the first time. They included: 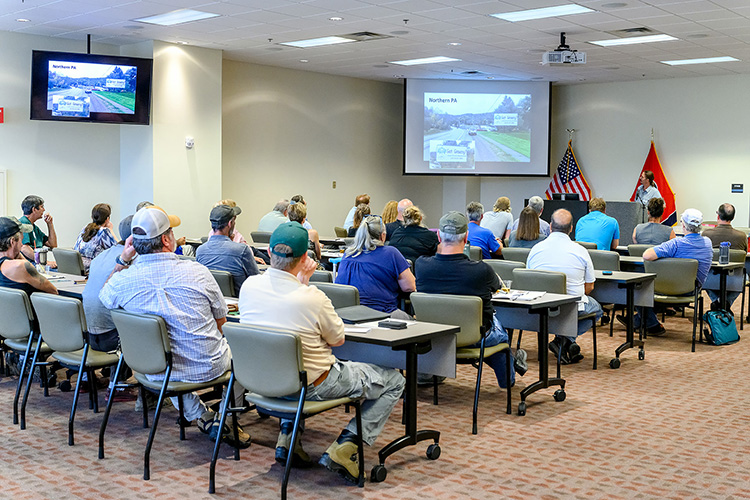 A room full of attendees at the Tennessee Ginseng Growers Fall Meeting held recently at MTSU’s Miller Education Center listen to a presentation by Eric Paul Burkhart, faculty instructor in the Ecosystem Science and Management Department at Penn State University, and program director for the Appalachian Botany and Ethnobotany at Shaver’s Creek Environmental Center. The meeting was sponsored by the MTSU International Ginseng Institute. (MTSU photo by J. Intintoli)

“It was a great opportunity to have these renowned scholars speak to Tennessee growers,” Gao said. “We are thankful to them for bringing their real-life experience, knowledge and perspectives on ginseng to share with us, as it is valuable for Tennessee growers. We are excited to see research, cultural and regulation efforts all come together to benefit the conservation of this wild native-to-Tennessee plant.”

Pat Ford, a botanist in the Division of Scientific Authority with the U.S. Fish and Wildlife Service’s CITES office, also attended both meetings. She was joined by Caitlin Elam, ginseng coordinator from the Tennessee Department of Environment and Conservation, along with David Lincicome, Natural Heritage program manager.

Susan Leopold, executive director of the United Plant Savers, attended the second day meeting and brought the support and experience of her organization to the group.