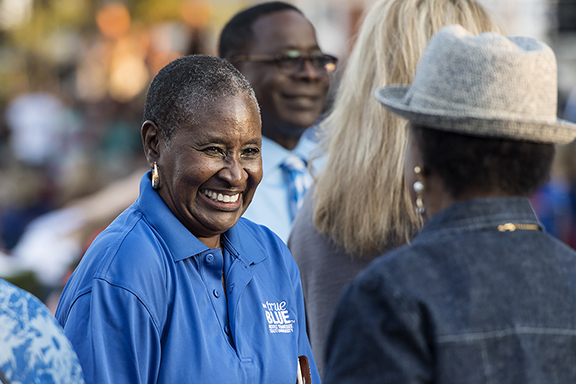 Always a teacher at heart, MTSU’s Gloria Bonner pledges to continue fulfilling that God-given purpose even after she leaves her alma mater in a few weeks.

The woman known to so many as simply “Dr. Bonner” will officially retire March 1, leaving in her current role as assistant to the president in the Office of University Community Relations, President Sidney A. McPhee announced Wednesday, Feb. 8. 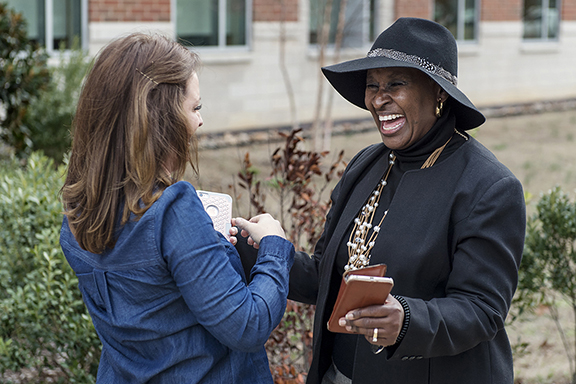 Dr. Gloria Bonner, assistant to the president in the Office of University and Community Relations at MTSU, greets Leadership Rutherford Class of 2017 member and MTSU alumna Carrie Beth Catron during the group’s Feb. 1 visit to campus. Catron was a former student of Bonner’s during her years as an education professor at the university. (MTSU photo by Andy Heidt)

With her 44 years in education, 32 of which have been spent in academic and administrative roles at MTSU, Bonner is wrapping up an extraordinary career by leaving a legacy of leadership, mentorship, passion and service that few can match.

She was the first African-American dean of an academic unit at MTSU and has been recognized throughout her career as a strong advocate for high academic standards at the university, state, regional and national levels.

In her current role, Bonner has worked closely with McPhee on strengthening university outreach to and collaboration with the wider community to advance the university’s mission of helping more people earn a college degree and get a quality education.

“Dr. Bonner’s service to her alma mater, Middle Tennessee State University, and our entire community has been extraordinary,” McPhee said. “She has devoted more than four decades to classroom teaching, research, community service and administration at our university, most notably as dean of our former College of Education and Behavioral Science and as my assistant for community relations.

“Beyond our campus, she has exemplified our ‘True Blue’ ideal of service through her work with various governmental, nonprofit and educational organizations. Her hard work and belief in the importance of forging relationships at many different levels benefitted not only the students of our university but the citizens of our city, county and state.

“My wife, Elizabeth, as well as the students, faculty, staff and alumni of MTSU, join me in thanking Gloria for her devotion to our university, her friendship and lifetime of service.”

After earning her bachelor’s, master’s and education specialist degrees at MTSU, Bonner secured her doctorate in education from Tennessee State University in Nashville. She taught in Murfreesboro City Schools and the Dekalb County School System in Decatur, Georgia, before returning to her alma mater.

In this September 2016 file photo, Dr. Gloria Bonner, assistant to the president in the MTSU Office of University and Community Relations, chats with attendees at the university-sponsored “Friday Night Live on the Square” event in downtown Murfreesboro. In the background is MTSU President Sidney A. McPhee. (MTSU photo by Andy Heidt)

She is a past recipient of the MTSU John Pleas Outstanding Faculty Award, the Trailblazer Award in Education, the Distinguished Classroom Teacher Award in Higher Education in the State of Tennessee and the MTSU Faculty Award. Among other career highlights, she was a presenter at the University of Oxford in England, a graduate of the Harvard University Management Development Program and an inductee into the TSU College of Education Wall of Fame.

“Life for me has been extraordinary,” said Bonner, who grew up in “humble, humble beginnings” just a few blocks from campus on First Avenue.

“And to be able to fulfill my dreams — I love this university because it’s a part of who I am. I take ownership of all of the great opportunities that people created for me.”

Giving back to the community has always been a must for Bonner, who has shared her time and talents through local organizations such as the boards of directors for Main Street Murfreesboro/Rutherford County and Saint Thomas Rutherford Hospital and service in Rotary International, to name a few, and via enrichment opportunities such Leadership Middle Tennessee. She was the 2010 recipient of the local NAACP’s Jerry Anderson Humanitarian Award for Service to the Community.

Bonner is pledging to stay active in the community, but she also looks forward to more time with her family: her husband, Ray Bonner, an MTSU alumnus, Blue Raider Sports Hall of Fame inductee in football and a longtime football and track coach who’s spent the last three years as an assistant track coach at MTSU, and their daughter, Tracey Nicole Bonner, a professional actress.

As it has throughout her life, Bonner said her faith will guide her in this next phase. She noted one of her favorite quotes from Dr. Martin Luther King Jr.: “Life’s most persistent question is, ‘What are you doing for others?’”

“If my future is as extraordinary as my previous years, I have a lot to look forward to,” she said. “And that’s the thing I’m excited about.”