TBI director discusses law enforcement on ‘MTSU On the Record’ 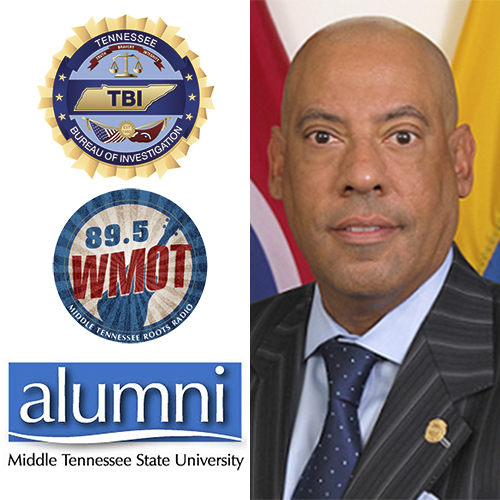 The head of Tennessee’s primary investigative law enforcement agency was the guest on a recent edition of the “MTSU On the Record” radio program.

Host Gina Logue’s interview with Mark Gwyn, an MTSU alumnus and director of the Tennessee Bureau of Investigation, first aired Feb. 7 on WMOT-FM Roots Radio 89.5 and www.wmot.org. You can listen to their conversation below.

Gwyn will be the keynote speaker for the 21st annual Unity Luncheon, a tribute to unsung community heroes, Thursday, Feb. 16, in the Student Union as part of MTSU’s celebration of Black History Month.

The first African-American to head the agency, Gwyn, a native of McMinnville, Tennessee, was appointed director in 2004. He joined the TBI as a special agent in 1988 and has served as the agency’s executive officer and head of its Forensic Services Division.

One of the topics Gwyn addressed during the interview was a need for greater community policing in light of numerous clashes between police and African-Americans nationwide.

“It has brought out the distrust that the public has in law enforcement,” said Gwyn. “For whatever reason, it’s here now and law enforcement has to address it.