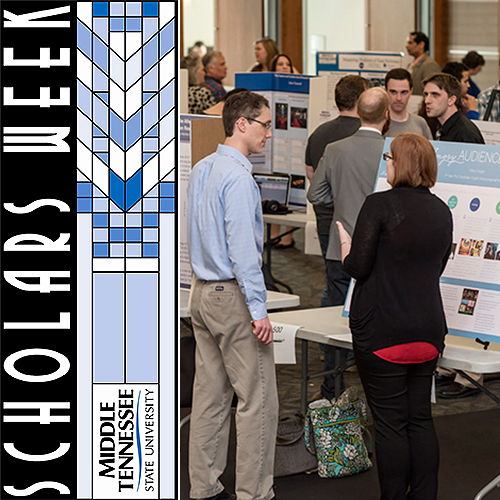 MTSU students and their faculty mentors who are preparing for the 11th annual Scholars Week 2017 must submit their abstract proposals by noon Tuesday, Feb. 28, according to Dr. Andrienne Friedli, Scholars Week Committee chair.

Abstracts should be submitted online through www.mtsu.edu/research/scholarsWeek/index.php.

Friedli said that each online abstract submission should include a project title and 150- to 300-word summary of the research project. Only submissions with undergraduate and graduate students as first authors will be eligible for judging and prizes.

Applicants will be notified by March 6 if their abstracts have been accepted.

Scholars Week 2017, set March 27-31, will include department and college activities in discipline-specific venues to allow undergraduate, graduate and faculty scholars to make their presentations. Each college has separate submission processes and deadlines for proposals.

Planned activities will include talks, readings, performances, posters and multimedia presentations, said Friedli, a chemistry professor who’s led the Scholars Week Committee for a decade. She also serves as director of special projects for MTSU’s Office of Research Services and director of the university’s Undergraduate Research Experience and Creative Activity, or URECA, grants.

Judges will select the winners from each of the colleges. The awards ceremony begins at 3 p.m.

The Scholars Week Committee includes representatives from all of MTSU’s nine colleges, who help arrange each college’s Scholars Day during the weeklong event.

Click on the graphic for more details on Scholars Week 2017 at MTSU.