MTSU Board of Trustees approve..

MTSU Theatre students are preparing the way of the Lord — and for big show-stopping tunes to return to Tucker Theatre — when they bring the Tony-nominated musical “Godspell” to audiences online April 8-11.

Tickets, available now at www.Showtix4u.com/Events/MTSUTheatre, are $10 general admission for one user, $15 for a family ticket for up to four viewers, and $20 for a large-family access ticket for five or more users on one device.

A socially distanced handful of in-person audience members at Tucker Theatre, located inside MTSU’s Boutwell Dramatic Arts Auditorium at 615 Champion Way, will provide much-needed live feedback for the cast and crew at each MTSU Arts performance. 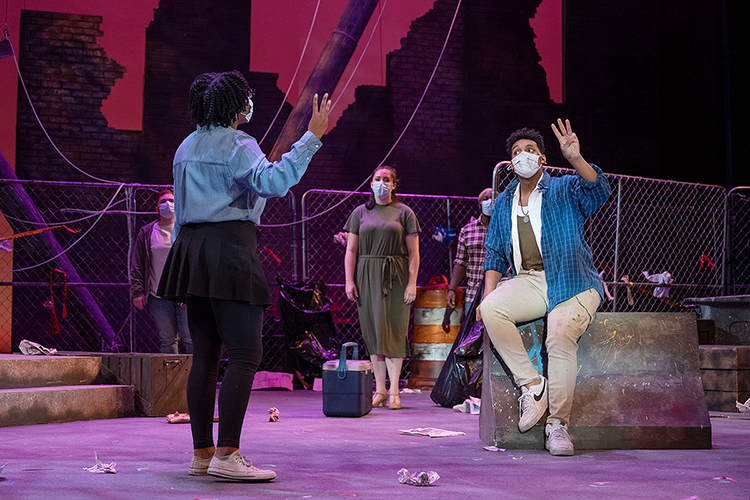 MTSU senior Caleb Mitchell of Antioch, Tenn., right, responds to castmate Stokeley Ellison, a junior from Friendship, Tenn., as she sings “Day by Day” and other cast members look on during dress rehearsal Monday, April 5, in Tucker Theatre for MTSU Theatre’s spring production of “Godspell.” Tickets are available at www.Showtix4u.com/Events/MTSUTheatre. (MTSU photo by Cat Curtis Murphy)

“Godspell,” created by Stephen Schwartz and John-Michael Tebelak, premiered off-Broadway in 1971 and is regularly revived worldwide, in part because of the continuing popularity of its score, featuring the top-20 pop hit “Day by Day,” and its 1973 film adaptation.

Its title the Anglo-Saxon version of the word “gospel,” “Godspell” — or “good story” — tells of Christ with parables based on the New Testament book of Matthew, using tunes that incorporate traditional hymns’ lyrics. Eight non-Biblical characters sing and act out the stories with two actors portraying Jesus and John the Baptist/Judas.

Department of Theatre and Dance professor Kristi Shamburger has directed MTSU Theatre’s last several seasons of big-ticket spring musicals, including “9 to 5: The Musical,” “Joseph and the Amazing Technicolor Dreamcoat,” “Peter Pan,” “West Side Story” and “Les Misérables,” and led “Kiss Me Kate” in fall 2019.

The pandemic shut down the department’s spring 2020 musical, “Alexander and the Terrible, Horrible, No Good, Very Bad Day,” 18 days before its scheduled opening. Music returned to Tucker last fall on a smaller scale with MTSU Theatre’s third show, “Ride the Cyclone.”

“It has been a delight to work on this show from start to finish!” the always enthusiastic Shamburger says. “The show itself lends itself to different concepts; … we’ve set it in the ‘now.’ What happens when Jesus shows up and an unlikely group of people from all different walks of life come together to hear his message?

“It’s told in a playful and creative way; the show is very light-hearted in some areas and very heavy in others. Our cast is delightful and insanely talented — such wonderful singers, creators and collaborators! And our incredible designers! It looks to be an enjoyable experience for all, whether you’re viewing in person from the balcony — we are allowed a few — or online from afar!”

Musical director Angela Tipps, an instructor in MTSU’s School of Music who conducts the MTSU Women’s and Men’s Chorales, is guiding the gifted singers of MTSU’s “Godspell.”

Payton McCarthy of Murfreesboro, a junior majoring in theatre with a teaching licensure emphasis, is assistant director for the show.

Senior theatre major Caleb Mitchell of Antioch, Tennessee, whose MTSU Theatre career has included lead roles in “Six Degrees of Separation” and “Joseph and the Amazing Technicolor Dreamcoat,” is making his final Tucker Theatre appearance in this production as Jesus.

Fellow senior Kaleb Stone of Spring Hill, Tennessee, a theatre teaching licensure major whose most recent appearance was in “Ride the Cyclone” and who had a lead role in “Kiss Me Kate,” is portraying John the Baptist and Judas in “Godspell.”

Using the character names and revised script elements of the 2011 “Godspell” Broadway revival, this MTSU Theatre cast draws from colleges campuswide and includes:

The rules are adapted from multiple professional sources, including Actors Equity, the U.S. Occupational Safety and Health Administration and the Centers for Disease Control and Prevention.

Audiences were able to enjoy MTSU’s fall 2020 theatre season online thanks to help from Department of Media Arts advanced multi-camera TV production students in the College of Media and Entertainment.

The theatre department is handling video and streaming itself this spring. May 2020 alumnus Matthew Phillips, a dual video and film production and theatre graduate who’s now working toward his MBA degree in the Jones College of Business with a music business concentration, is directing the livestream for “Godspell” with Lauren Hawkins, a senior theatre major from Ashland City, Tennessee.

The show program with the complete cast and crew list is available here. A preview of the show is available above. 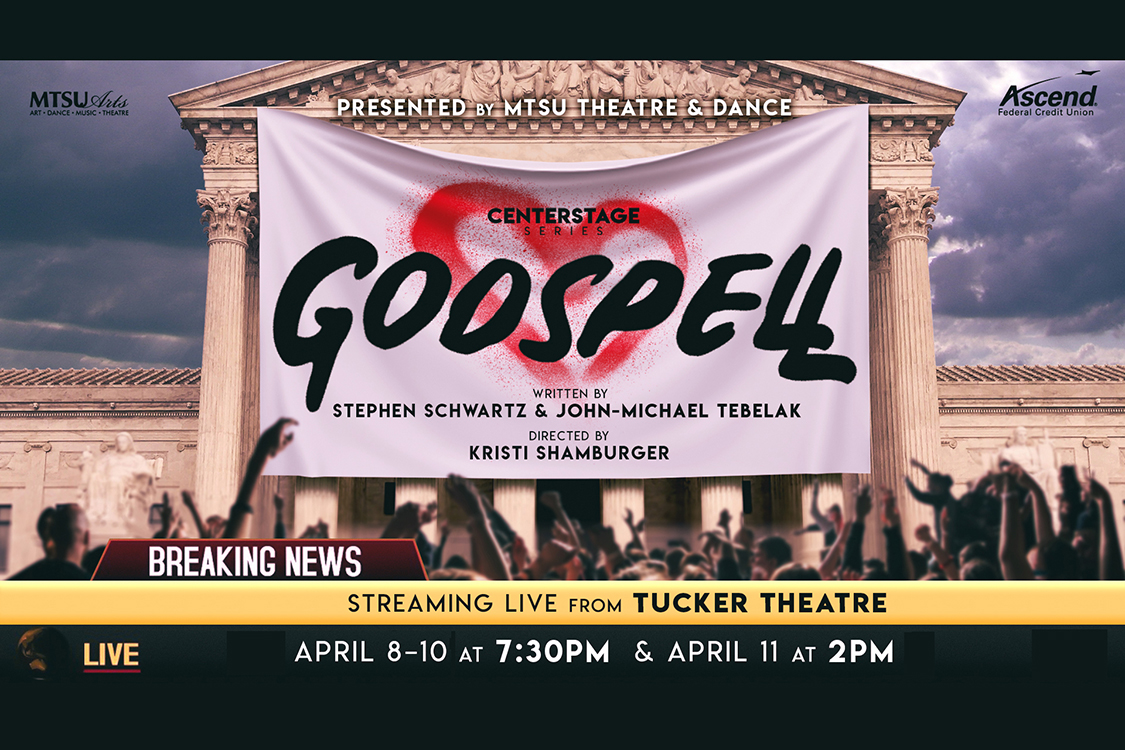 “They will be wearing masks, just like we do in the ‘now,’” Shamburger says. “They will be coming together in a time of chaos, they will be socially distanced on stage, and they will tell this story.

“We’ve had a blast finding new ways to do theater in these very different times, and we’ve enjoyed the challenge — it has really breathed new life into the show for me, and I hope it will for all involved.”

For more details on the show, visit www.mtsu.edu/theatreanddance/currentseason.php. 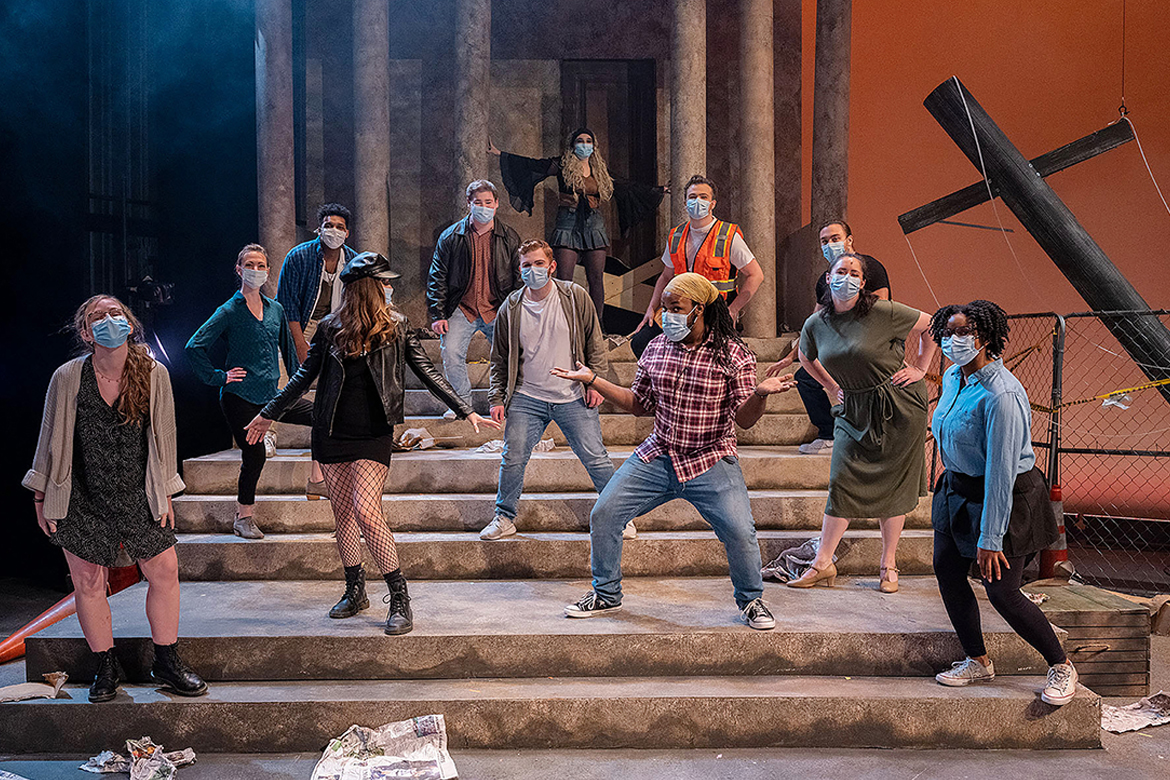 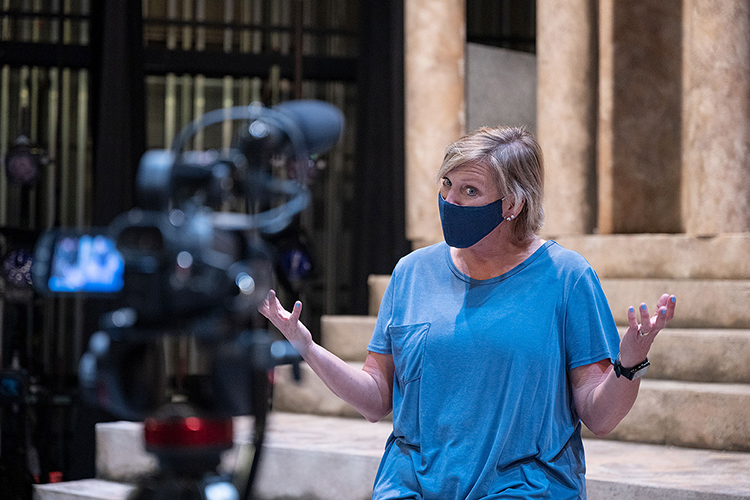 MTSU Department of Theatre and Dance professor Kristi Shamburger makes a point to the cast and crew of MTSU Theatre’s spring production of “Godspell” as they work on their crumbling cityscape set, designed by senior Maggie Shivers of Kingston Springs, Tenn., during dress rehearsal Monday, April 5, in Tucker Theatre. The production, directed by Shamburger, will be presented live online April 8-11. (MTSU photo by Cat Curtis Murphy) 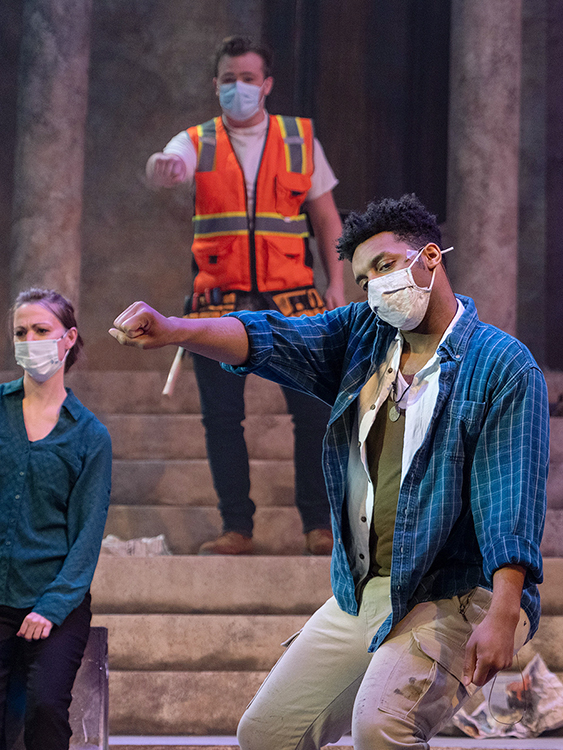 MTSU senior Caleb Mitchell of Antioch, Tenn., gestures during dress rehearsal Monday, April 5, in Tucker Theatre for MTSU Theatre’s spring production of “Godspell.” Mitchell, a theatre major, is portraying Jesus in the Tony-nominated musical, which will be presented live online April 8-11. Also shown are junior Kassandra Hazard of Sevierville, Tenn., a production understudy, and senior Kaleb Stone of Spring Hill, Tenn., who is portraying John the Baptist and Judas in the show. (MTSU photo by Cat Curtis Murphy) 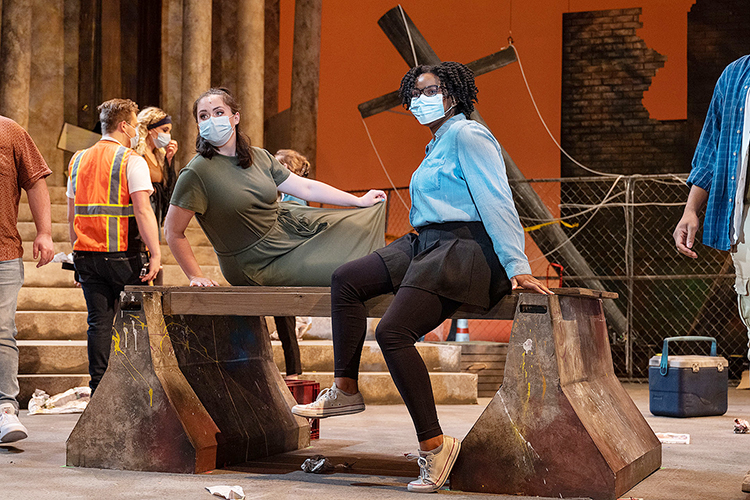