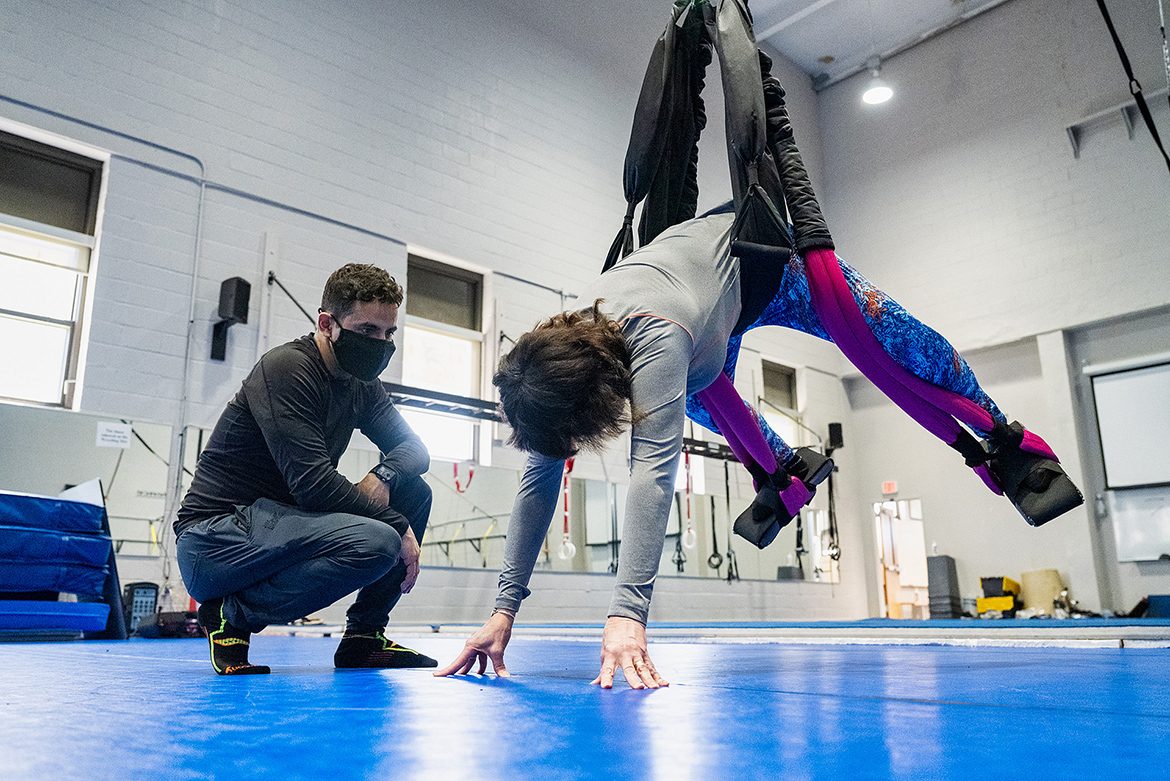 Imagine a device that could help ease lower back pain, is simple to install and enables you to have fun flying safely through the air.

Researchers with the MTSU Exercise Science Program have concluded a preliminary study of just such a device.

“I was very skeptical in the beginning,” said Rawsam Alasmar, a graduate teaching assistant who conducted the study with Sandy Stevens, an associate professor of exercise science. “I spoke to Dr. Stevens to come and just investigate the device with me to make sure if there was any legitimacy to it or if this was just another gimmick.”

PENDL users are tethered to the apparatus, which is suspended from a ceiling or other elevated point. The fabric straps, with two for the arms and two for the legs, create a sort of harness for safety and security. 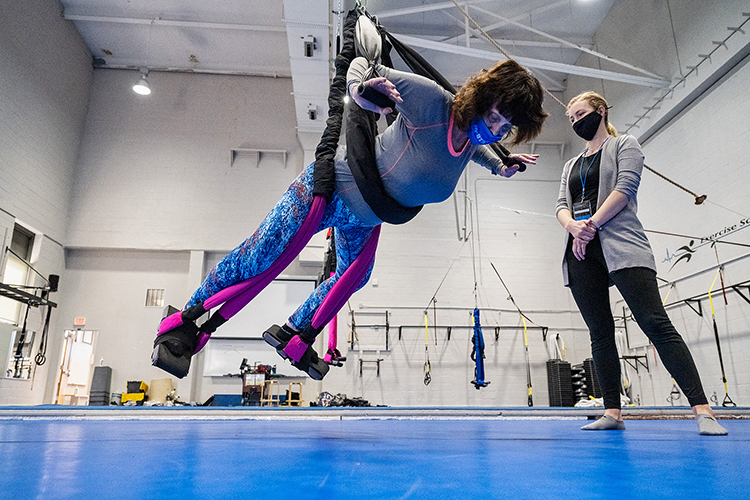 Users can both spin and swing depending on the configuration of the device. They are compelled to use their muscles in order either to go to the ground or to move around in midair.

“Movements and exercises can be (altered) based on the level of fitness each person is comfortable with,” Alasmar said.

Alasmar and Stevens recruited 12 participants (10 completed the study) between the ages of 18 and 65 for the study by having them fill out questionnaires tailored to people with low back pain who rated the extent of their pain somewhere between 10 and 40 on a scale of 0 to 100.

With four people in the experimental group and six in the control group, participants performed 20 different exercises for the low back on the PENDL in three one-hour sessions a week over eight weeks.

“We increased the intensity as they got better and more comfortable with the exercises,” Alasmar said. “So, by the eighth week, they were doing certain movements that they could not do in the first week.” 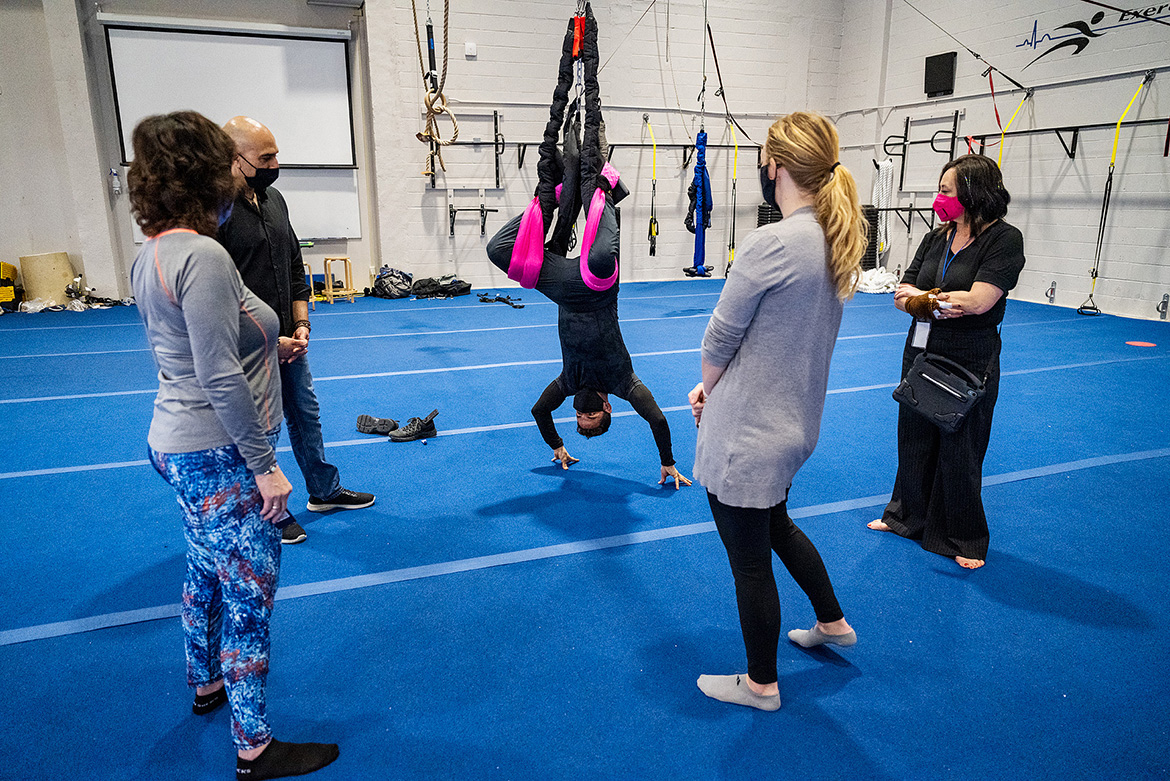 “We believe if safety guidelines on the PENDL are followed and exercise programs are designed and implemented appropriately the PENDL can be incorporated as an effective exercise tool into instruction training both in one-to-one person training and in group exercise settings,” Alasmar said.

In describing how PENDL works, Stevens likened it, at least on one level, to MTSU’s groundbreaking work in assessing the impact of underwater treadmill work on people with limited mobility.

“In some ways, it works on the same philosophy as the underwater treadmill, that idea of unloading and putting people in an environment that is safe where they feel they can explore motion without the risk of damaging themselves or injuring themselves further,” Stevens said.

PENDL’s creator, Framauro Fortich-Perez, is a software engineer and martial arts aficionado who sought a kind of relief from low back pain that wouldn’t involve surgery or medication. 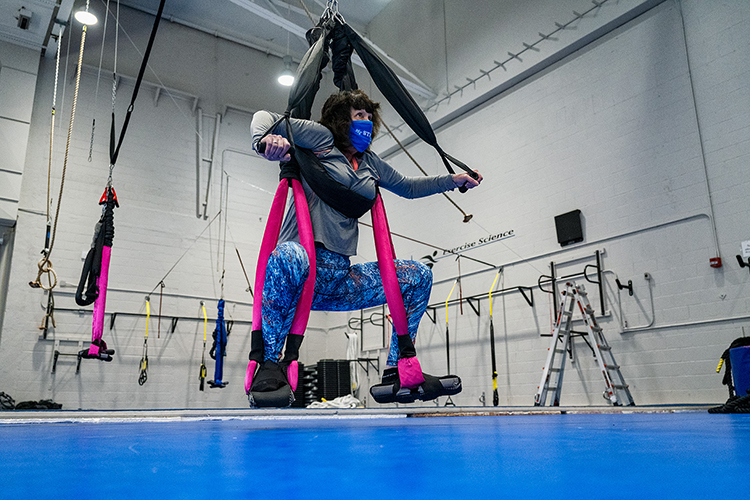 University Studies lecturer Debra Haber demonstrates the PENDL, a new device which purports to help alleviate lower back pain, during a March 26 demonstration in Alumni Memorial Gym. The person can move up and down, sway from side to side and rotate around, depending on the type of exercise one is performing and the therapeutic benefits one is trying to obtain. The Exercise Science Program has conducted evidence-based research into the PENDL. (MTSU photo by Andy Heidt)

The device is on the market commercially. However, the manufacturer is still finalizing the purchasing, payment and distribution channels. The cost can vary depending on model size, configuration for rehabilitation or fitness and range of accessories.

After the study was concluded, faculty and graduate students recently tried PENDL for themselves at Alumni Memorial Gym under pandemic protocols of masking, equipment sanitation and physical distancing.

Watch a promotional video of the PENDL in use with comments by Stevens and Alasmar below. For more information, contact Stevens at sandra.stevens@mtsu.edu or Alasmar at rsa2z@mtmail.mtsu.edu. 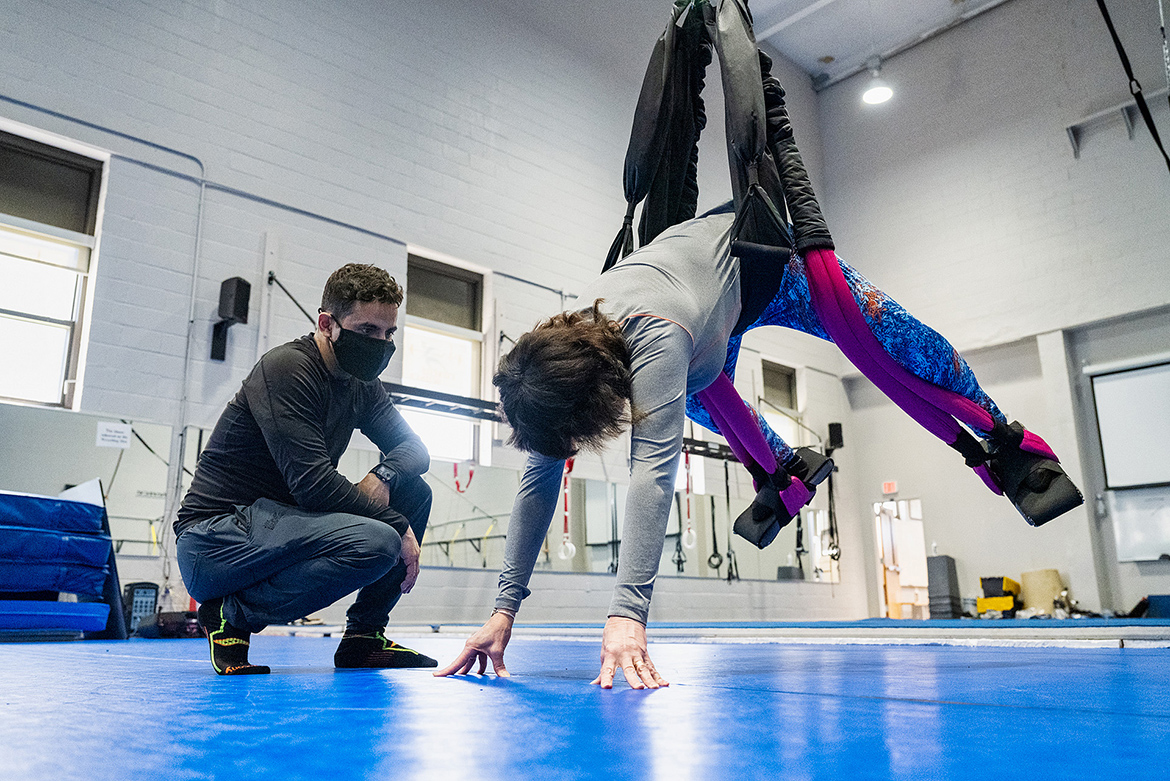