‘MTSU On the Record’ goes wild..

Joe Hager’s wife’s birthday was coming up in a few months and he wanted to do something special.

Dianne (Schleicher) Hager was born in Nashville 10 days after older brother Jimmy Schleicher, a former Middle Tennessee State College student and three-sport athlete, was killed June 26, 1944, in a plane crash in India while serving his country in World War II. 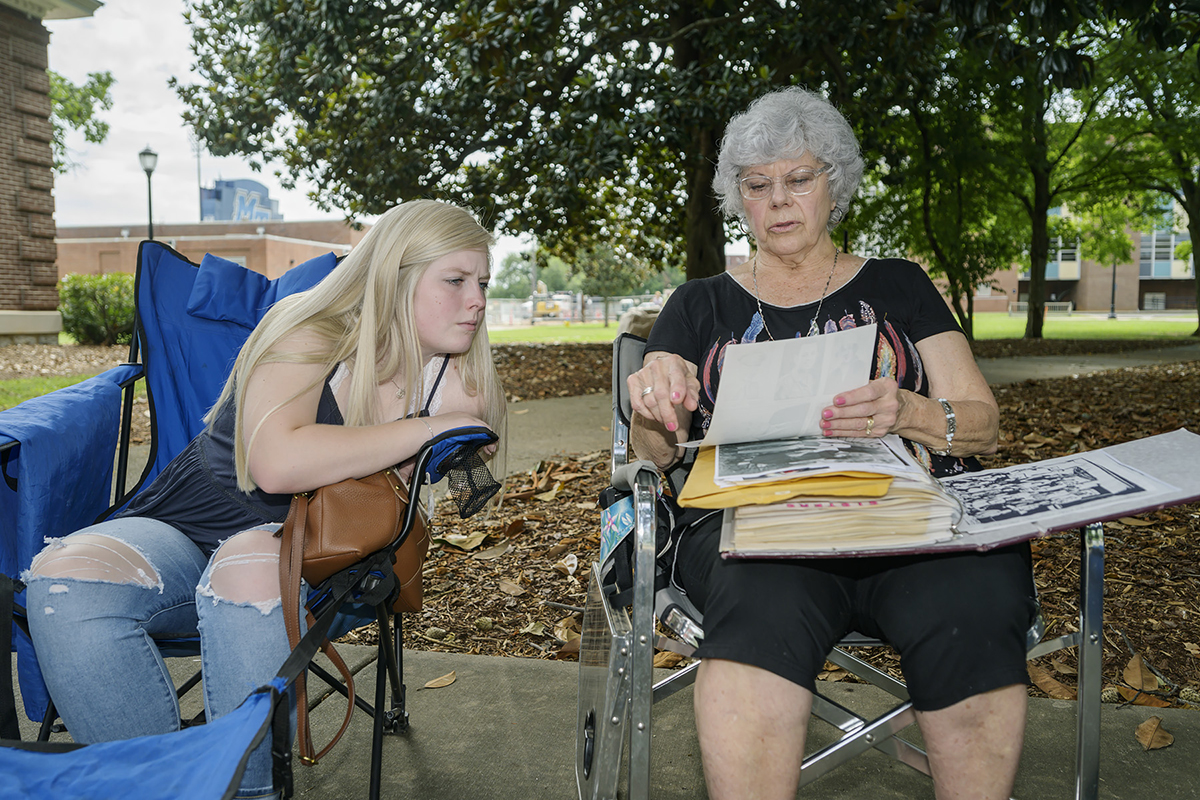 At the MTSU Veterans Memorial site, Kara Brady, a college student from Brandenburg, Ky., views copies of photographs that her grandmother, Dianne Hager, has of Hager’s brother, U.S. Army Capt. Jimmy Schleicher, who died June 26, 1944. Hager was born 10 days after he perished. Both attended MTSU. (MTSU photo by Andy Heidt)

Joe Hager wanted to surprise his wife, an MTSC student as a freshman in 1962-63, with a 75thbirthday present on the 75thanniversary of her brother’s passing. He reached out to Hilary Miller, director of MTSU’s Charlie and Hazel Daniels Veterans and Military Family Center.

Miller told Hager about the MTSU Veterans Memorial outside the Tom H. Jackson Building. Jimmy Schleicher’s name — and those of 68 other Middle Tennessee State University alumni killed in action — adorn the memorial wall. Miller and Hager formed a plan.

Hager almost pulled off the surprise. “I worked hard at keeping it a secret,” he said, adding other family members knew. “Thursday (July 11), I told her to pack a bag. It went downhill after that.” Dianne, a longtime education administrator, began asking questions. He had to confess.

More than 20 family members came Saturday (July 13) for what Miller called a Gold Star Family Reunion. It truly was a Southern-style family reunion, with hugs, reminiscing, scrapbooks, barbecue and more.

“This is really wonderful,” Dianne Hager said of both the occurrence and Veterans Memorial site, a venue for ROTC commissioning ceremonies, the annual 9/11 Remembrance and Salute to Armed Services memorial event in November. “I have no memory of Jimmy, only pictures, but I have a connection. Nobody at the time wanted to talk about (his death). It was so devastating to my mother.” 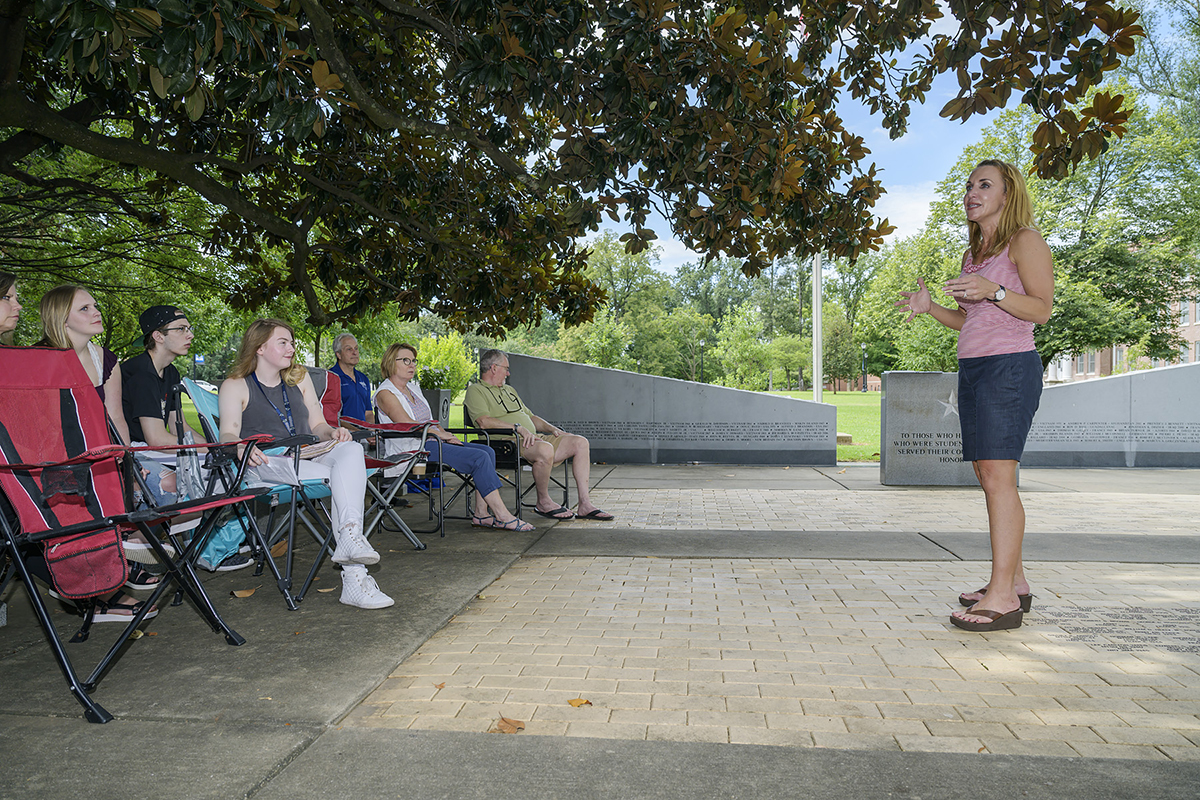 It took Joe Hager two to three days to write a four-page historical perspective about B-29 pilot and Capt. Jimmy Schleicher, brothers Bill and Don Schleicher (a POW) and others, including Hager’s stepfather, who exhibited PTSD years before it was called post-traumatic stress disorder.

And if there was any question the family was not to gather for the reunion in Murfreesboro on Saturday, Hager held the answer in the palm of his hand — a 1944 penny he discovered that morning on the ground outside the hotel where they stayed. 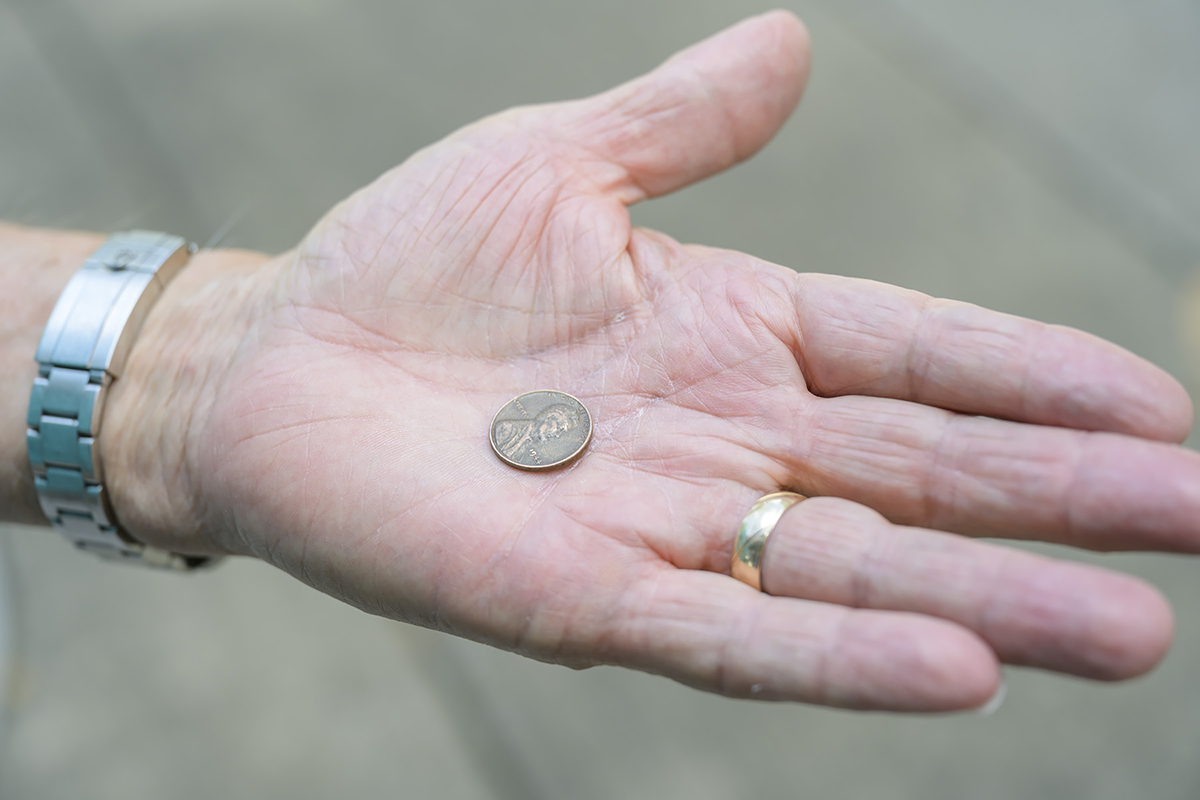 Holding it in the palm of his hand, Joe Hager happened to look down and found a 1944 Lincoln penny at the Murfreesboro hotel where he and his family stayed. Jimmy Schleicher, the brother of Hager’s wife, Dianne, died June 26, 1944 — 10 days before his sister was born. The family gathered at MTSU last weekend at the MTSU Veterans Memorial site to celebrate the 75th anniversary of Schleicher’s passing and Dianne Hager’s 75th birthday. (MTSU photo by Andy Heidt)

A third MTSU-Schleicher connection was that of the Lillie brothers, nephews of former students Schleicher and Dianne Hager.

Stan Lillie (Class of 1976) of Fayetteville, a biology major commissioned from the ROTC program as a second lieutenant, retired from the U.S. Army in 2007 as a brigadier general, earning numerous U.S. decorations and badges for distinguished service and more.

Shawn Lillie (’88) of Collierville, an MTSU political science major, is an attorney in Memphis. All three and their father were members of the Sigma Alpha Epsilon fraternity.

Genautis represented for her mother, Jamie Lewis, Jimmy Schleicher’s only child, who was unable to attend because of a family illness.

“Oh, my gosh. The whole feeling is very surreal, not knowing him (Jimmy),” said Genautis. “Growing up (in Indiana), we came and visited family in Nashville, but not having a connection with him. … Today (Saturday) has been very touching. There has been a whole flood of emotions I can’t put into words.” 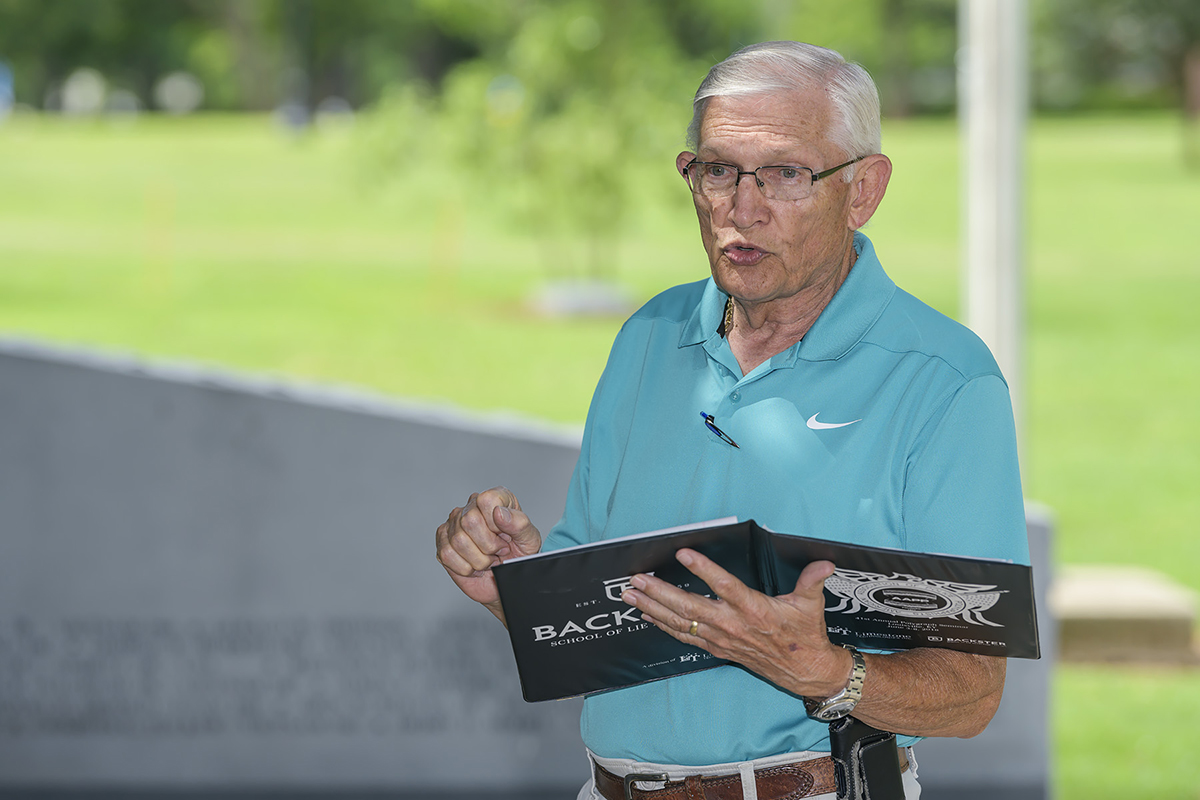 Joe Hager of Brandenburg, Ky., shares some of the historical perspective about the life and death of Jimmy Schleicher, a graduate of Middle Tennessee State College and fallen WWII pilot. More than 20 members of the Schleicher family gathered Saturday, July 13, at the MTSU Veterans Memorial site for a Gold Star family reunion and special brick presentation on the MTSU campus. (MTSU photo by Andy Heidt)

Genautis’s son, Christian Schaumann, has served in the U.S. Marines, twice in Iraq and also in Afghanistan.

Miller told the family it was an “amazing day.”

“What a neat family,” she added, while pointing out the Gold Star brick for the Schleicher Family and telling everyone about the memorial site. “I’m thrilled all of you wanted to come out.”

Later, she said assisting Gold Star families “is part of our mission. … I am pleased, honored actually, that this amazing family of patriots wanted to spend such an important time with us.”

Tony Johnston, a retired U.S. Air Force lieutenant colonel and MTSU director of the fermentation science program, said “this is exactly what we hoped for when we talked about the concept of a memorial. It was nice to see a family using it for what we intended.”

MTSU has more than 300 combined undergraduate and graduate programs. To learn more about the Daniels Center, call 615-904-8347. 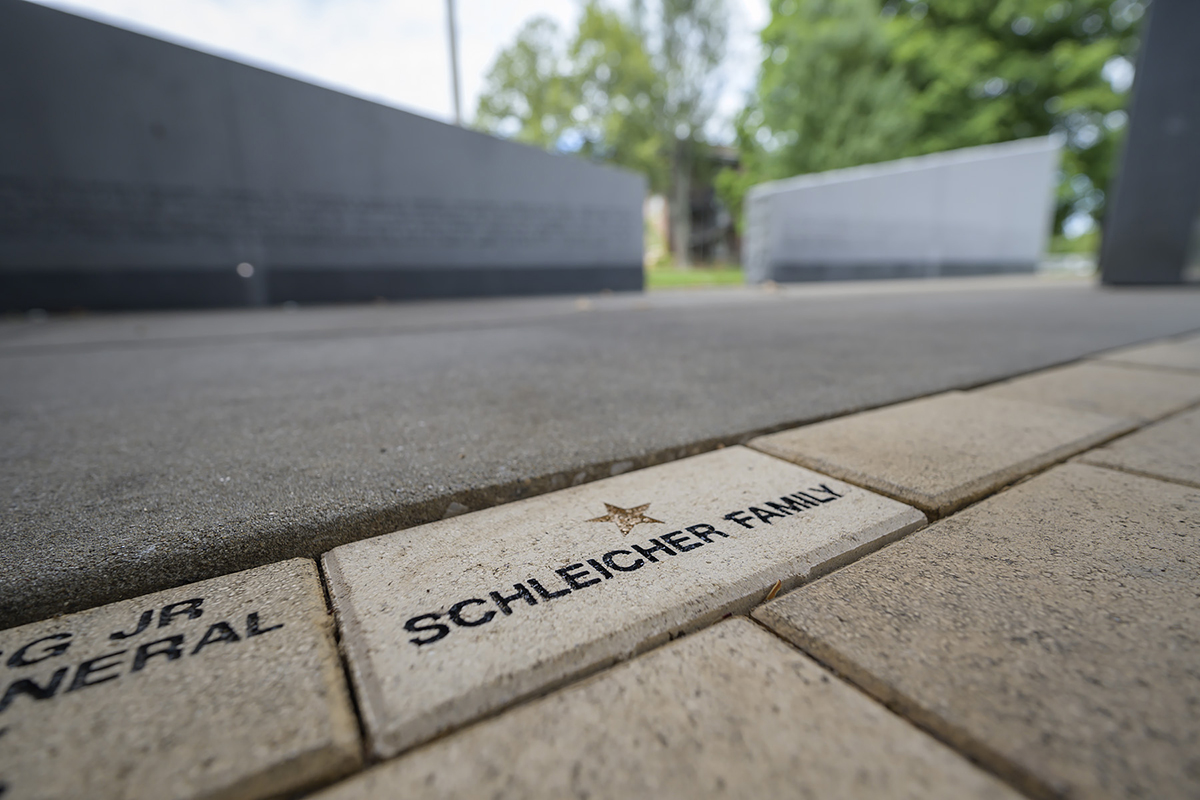 Members of the MTSU Veterans Committee purchased a Gold Star brick to honor the Schleicher family in memory of former student Jimmy Schleicher, a three-sport athlete while attending then-Middle Tennessee State College. Hilary Miller, director of the Daniels Veterans Center, made the presentation to the family Saturday, July 13, at the Veterans Memorial site. (MTSU photo by Andy Heidt) 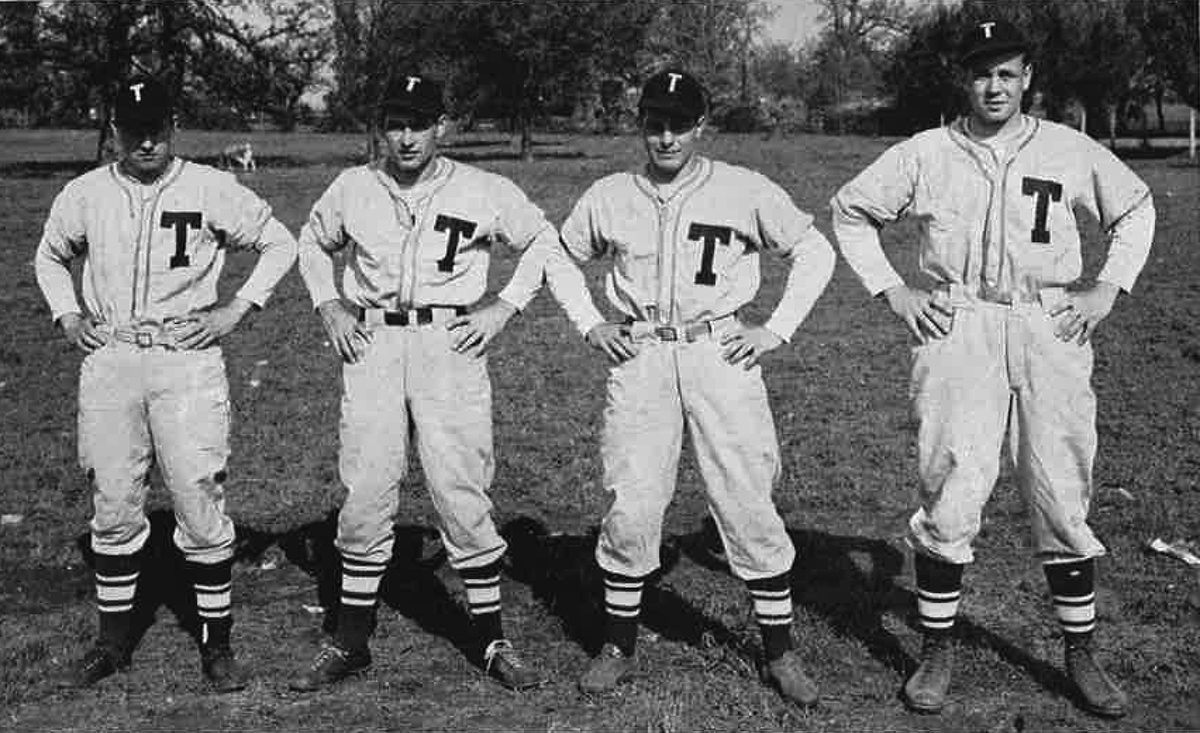 Including baseball, Jimmy Schleicher, right, was a three-sport athlete for the MTSC Blue Raiders. (Photo by Midlander)